Facebook has bought a Boston based government ID verification service, Confirm, which Facebook will most likely use to confirm the identities of suspicious accounts in its fight against fake accounts used to spread political propaganda. Prior to Facebook purchasing the start-up, the start-up provided APIs that app developers could embed with their services. The Confirm APIs (Application Program Interface) allowed apps and online services to analyze a scan or photo of a user ID and determine if it was real or fake. Prior to the purchase, Confirm boasted that over 750 customers deployed its API throughout various products. Some of the common use cases for Confirm's government ID verification services included onboarding and account creation processes; P2P identity checks; fraud escalation, banking, and legal transactions. As per the purchase agreement, Confirm will shut down its activity and the company's employees will join Facebook's Boston office.

The Reason for Buying Confirm

Facebook has bought the innovative startup in an attempt to successfully fight back against the creation of fake and bot accounts that have been used to spread fake news and disinformation for propaganda purposes, amongst others. Facebook currently uses a procedure through which it asks users to upload a scan of an ID or another government-issued document to prove their identity. The process is slow as it requires a Facebook staffer to inspect the scan then approve the account or not. It is hoped by incorporating Confirm’s services this slow process will speed up and nearly completely automated. Thus reducing the time needed to verify accounts and shut down suspicious profiles reported by other users. 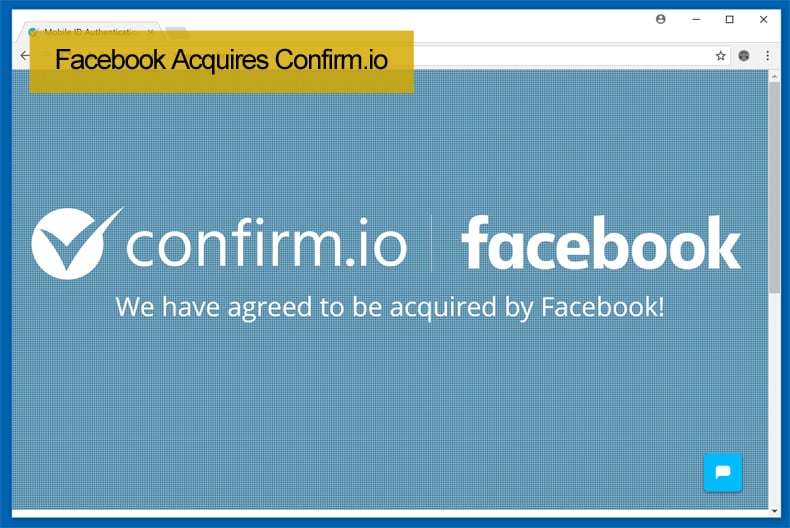 This latest acquisition can be seen as the latest move by Mark Zuckerberg, Facebook CEO, to refocus the company's efforts to fight political propaganda, bot accounts, and fake news on the platform. The company recently announced it would be reducing the number of news stories on the site in favor of posts from family and friends, and started testing a new CAPTCHA tool that verifies accounts by asking users to upload a clear picture of their face. In addition, the social network has also deployed a tool that notifies users when someone else uploads a picture of them somewhere else on the site; and has published a Help Center page that tells users what Facebook pages and Instagram accounts they followed that are linked to supposed Russian propaganda efforts.

By improving the CAPTCHA tool it is hoped to increase the likelihood of catch suspicious activity at various points of interaction on the site. The new CAPTCHA system is automated, uses facial recognition, and looks for unique photos. This means bots can't take a random person's picture off the Internet or from other Facebook accounts to authenticate. The company says the new CAPTCHA system is likely to pop up when users register new accounts, send friend requests, or set up or edit Facebook ads. Facebook said the system is still under testing and will not share any details about it in order to prevent manipulation.

Some of the Reasons for Beefing Up Security

Facebook has publicly admitted that its platform was used by governments seeking to manipulate public opinion in other countries, including during the presidential elections in the US and France. The company released a white paper which detailed how well-funded and subtle techniques used by nations and other organizations to spread misleading information and falsehoods for geopolitical goals. These efforts go well beyond “fake news”, the company said, and include content seeding, targeted data collection and fake accounts that are used to amplify one particular view, sow distrust in political institutions and spread confusion. The company stated:

“We have had to expand our security focus from traditional abusive behavior, such as account hacking, malware, spam and financial scams, to include more subtle and insidious forms of misuse, including attempts to manipulate civic discourse and deceive people,”

During the French Election that happened in 2017, the company suspended 30,000 accounts in France before the presidential election. The company said it was a priority to remove suspect accounts with high volumes of posting activity and the biggest audiences. The company also explained how it monitored “several situations” that fit the pattern of information operations during the US presidential election. The company detected “malicious actors” using social media to share information stolen from other sources such as email accounts “with the intent of harming the reputation of specific political targets”. This technique involved creating dedicated websites to host the stolen data and then creating social media accounts and pages to direct people to it.

In another report, it was revealed how China used Facebook to spread propaganda. This was particularly interesting as Facebook is banned in mainland China. The Chinese government bans Facebook as it is believed to be a powerful tool for disseminating information and influencing opinion. As if to prove this belief outside its borders China uses it to spread state-produced propaganda around the world, including the United States. So much do China’s government and companies value Facebook that the country is Facebook’s biggest advertising market in Asia, even as it is the only major country in the region that blocks the social network. Each quarter, China’s government, through its state media agencies, spend hundreds of thousands of dollars to buy Facebook ads, according to a person with knowledge of those deals, who was unauthorized to talk publicly about the company’s revenue streams. With President Trump’s visit to China last year China’s propaganda efforts were placed in the spotlight by those looking to reign such efforts.

Further pressure placed on Facebook, as seen when the company was hauled before Congress in connection with Russian state meddling in the last election, will result in decreased earnings. Some critics argue that it is the tightrope walked by the company, on one side an ethical duty, the other profit is what will ultimately determine how Far Facebook is willing to go in combatting the exploitation of the social media platform. Often in such decisions, it is ultimately the desire for more profit that wins the day.