In the NCC Groups monthly threat pulse article it was discovered that the Pysa ransomware strain took the dubious honor of becoming one of the most prolific ransomware strains for the month of November. Attacking businesses has always been on the agenda for those behind Pysa, in the past the publication covered how the gang was targeting organizations within the education sector.

NCC’s latest findings show that Pysa attacks are up 50% with a 400% increase in attacks on organizations within the government sector.

“NCC Group’s Strategic Threat Intelligence team has identified PYSA and Lockbit as the threat actors dominating the ransomware landscape in November. Since August this year, Conti and Lockbit have been the top threat groups, but in November, PYSA, also known as Mespinoza, overtook Conti with an increase of 50%. Meanwhile, the prevalence of Conti decreased by 9.1%. PYSA is a malware capable of exfiltrating data and encrypting users’ critical files and data, which typically targets large or high-value finance, government and healthcare organizations.”

The majority of Pysa’s targets are based in either North America or Europe and in total the regions saw 154 and 96 victims respectively, for all ransomware variants including Pysa. 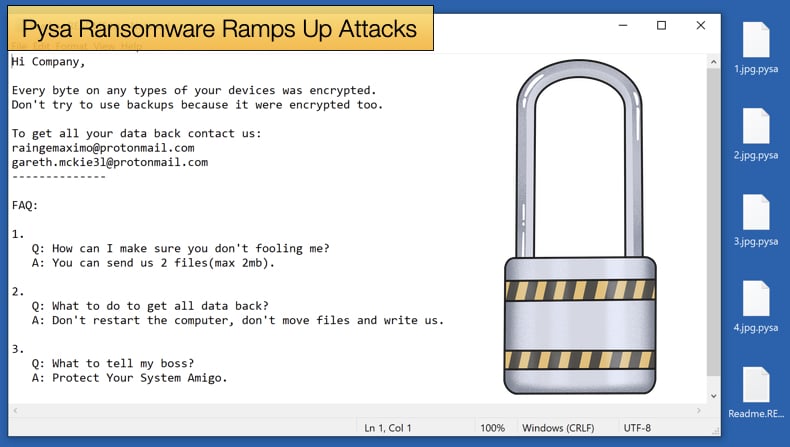 Since Pysa’s discovery, those behind the ransomware’s distribution have adopted several interesting traits that separate the ransomware gang from its rivals. One such tactic involves ransomware operators searching for evidence of a crime being committed by the targeted organization this information is then used to apply more pressure to pay the ransom.

Initial access to the network is often gained by abusing Remote Desktop Protocol (RDP) connections. Credentials to access an RDP connection can be stolen in several ways but phishing is still one of the more popular methods.

Pysa operators can either gain credentials via phishing or by using brute force attacks where thousands of username-password combinations are used to try and guess the login credentials. This type of attack relies on the victim using weak passwords that they feel are easy to remember.

In the past Pysa infections have also relied on backdoors installed on compromised networks by other types of malware. Initial access, once gained, is then used to allow the operator to search and analyze the entire network a device is connected to.

The ransomware’s operators appear to be highly disciplined and patient, spending extended periods undetected while they perform high levels of reconnaissance.

It is in this phase of the attack that the ransomware operator will search for evidence that may suggest the organization committed a crime or is linked to criminal activity.

If such evidence or activity is found it will allow the attackers to apply a massive amount of pressure on business leaders to pay. This is due in part to the fact that Pysa operators will release information to the broader public.

To suggest that this would be a PR nightmare for the company would be an understatement as the evidence may be used to advance criminal cases by local law enforcement agencies. This also means that Pysa operators are often emboldened to demand ransoms in excess of 1.5 million USD.

This begs the question if the ransom is paid are there any assurances such sensitive information will not be leaked? The simple answer is no. Pysa in the past has been known to leak data even if the victim has paid the ransom. This has happened, in some instances, six months after the ransom was paid and decryption keys handed over. The FBI noted that,

“In previous incidents, cyber actors exfiltrated employment records that contained personally identifiable information (PII), payroll tax information, and other data that could be used to extort victims to pay a ransom. The cyber actors have uploaded stolen data to MEGA.NZ, a cloud storage and file sharing service, by uploading the data through the MEGA website or by installing the MEGA client application directly on a victim's computer. However, in the past, actors have used other methods of exfiltrating data that leaves less evidence of what was stolen.”

Given that Pysa activity rose steeply in November, there is nothing to suggest that this trend will decrease in the holiday season.

As many staff take leave over the holiday period businesses and other organizations may be understaffed in critical cyber security positions making such organizations a priority target, not just of Pysa operators by ransomware gangs in general.