What was once called AbereBot, an Android banking trojan, has returned with a new version going by the name Escobar. The new variant is capable of stealing Google AUthenticator Multi-Factor Authentication (MFA) codes meaning the attacker could bypass this layer of security when looking to steal credentials that could aid in the committing of bank fraud.

Along with several other features, Escobar can steal enough personally identifiable information from an Android user’s device that the victim’s bank accounts can be accessed and funds stolen from the now compromised account. 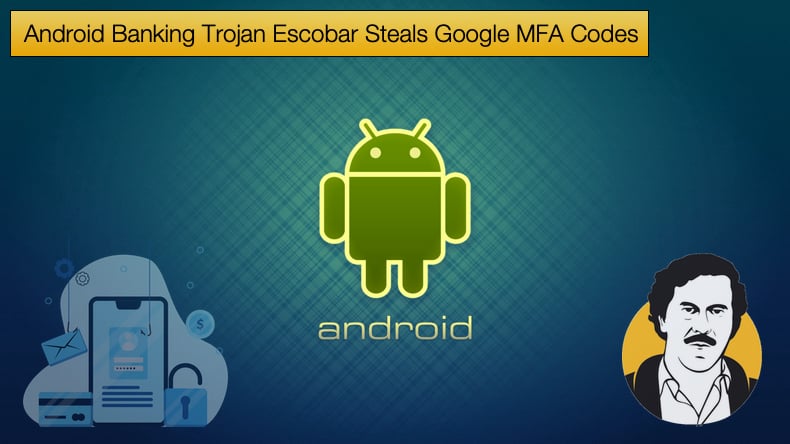 Researchers became aware of the new variant when the developer linked to AbereBot began advertising the Escobar variant on a Russian underground hacking forum. It would appear that the developer is looking to develop Escobar as a malware-as-a-service and will be charging 3000 USD per month for those looking to use the malware. From the advert, it is clear that the banking trojan is still under development as the developer will look to charge 5000 USD a month once the development is complete.

The initial discovery was made by Malware Hunter Team, who posted on Twitter on March 3, 2022, that they had detected a suspicious Android Package (APK) masquerading as a McAfee security product. At the time of detection Virus Total only detected it as malware on three of the 60 odd malware engines used by anti-virus vendors.

Following the initial discovery security firm, Cyble began to analyze a sample of the malware and subsequently published an article detailing their findings. As to the malware capabilities, they are a mix of old and new as well as some staples of banking trojans like Cerebus we have seen in the past. Cyble noted that the malware will request the user to approve 25 permissions, 15 of them malicious that enable the banking trojans information-stealing capabilities. These malicious permissions include:

Escobar like many other banking trojans makes use of overlays to steal information. What separates Escobar from other banking trojans is that it can be weaponized against any Android version, even if the overlay injections are blocked by a security app for example. Further, the latest version can target 190 banks and financial institutions from 18 countries in the latest version.

The most worrying feature of Escobar is its ability to collect Google Authenticator MFA codes. The codes are collected and then can be sent along with SMSes, call logs, and key logs to the attacker’s command and control server.

It is important to note that apps like Google Authenticator are proof against SIM swapping attacks but when the device is compromised by an attacker as in the case of a banking trojan infection, the codes sent by SMS can be intercepted.

The ability to intercept MFA codes is further supplemented by the addition of VNC Viewer, a cross-platform screen sharing utility with remote control features. This gives the threat actors a new powerful weapon to do whatever they want when the device is unattended.

Given that Escobar is still under development and the financial barrier to entry for the malware is rather high it is hard to guess the impact of the malware in the near future.

However, given its features and its capability to bypass blocks on overlays the malware does demand the attention of the InfoSec community at large. To help prevent infection by Escobar and other known banking trojans, Cyble advises the following: