Qakbot, also tracked as QBot, is well known for its botnet distributing the credential-stealing trojan component of the malware via malicious Microsoft Office documents. In many instances, Office documents, especially Word documents, would abuse the application’s macros feature to run malicious code.

This would often involve tricking the victim into enabling macros by alerting the victim to the document containing important information that can only be viewed if the alert is agreed to. 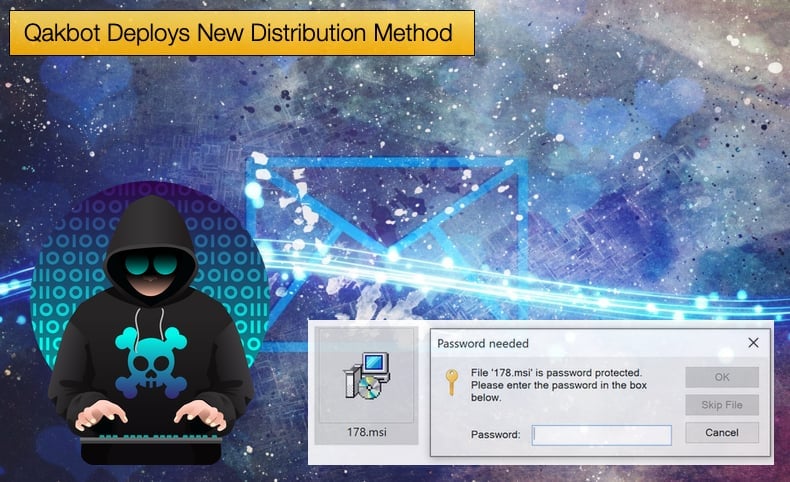 Often the attacker will first perform a recon campaign to get information that they can then utilize to craft the customized emails that would make up the context-aware campaign.

Upon deeper analysis, the attacker will often use the intended victim's social media profiles to gain more insight or by using mass spam emails that would link to what is called a non-critical website.

Such websites are designed to harvest information and do not provide the attacker with an immediate financial reward. Another method of harvesting information is by analyzing a victim’s browsing history.

“A wide range of threat actors continue to target our customers by sending documents and luring them into enabling malicious macro code.  Usually, the malicious code is part of a document that originates from the internet (email attachment, link, internet download, etc.).  Once enabled, the malicious code gains access to the identity, documents, and network of the person who enabled it.”

As for the restriction involving Excel 4.0 macros, Microsoft notes,

There is a fairly good argument to be made that the security changes Microsoft is implementing are due in part, at least, to their previous analysis of Qakbot. In December 2021, Microsoft’s 365 Defender Threat Intelligence Team published an in depth article looking at modern Qakbot tactics.

The malware is now well over ten years old but due to the malware’s inherent modularity could be quickly pivoted to perform new tasks.

As an example of this the malware began life as a banking trojan but can now perform several other tasks including: performing reconnaissance and lateral movement, gathering and exfiltrating data, or delivering other payloads on affected devices.

This modularity and flexibility has even been used to help distribute the Egregor ransomware. This poses a unique challenge to those tasked with defending IT infrastructure. As MIcrosoft notes,

“Qakbot’s modularity and flexibility could pose a challenge for security analysts and defenders because concurrent Qakbot campaigns could look strikingly different on each affected device, significantly impacting how these defenders respond to such attacks. Therefore, a deeper understanding of Qakbot is paramount in building a comprehensive and coordinated defense strategy against it.”

These might not all be present in a campaign but can be summed done to the first building blocks being dependent on the the email mechanism used to distribute the malware payloads. While, the email mechanism might rely on a malicious document, malicious hyperlinks and embedded images have been used in the past.

Critically these must all abuse macros to deliver the malware payload. The success of of a Qakbot campaign resys on the user enabling Macros so that the malware payload can be downloaded and executed. The infection chain once Macros are enabled has been summarized by Microsoft, with researchers noting,

“If the user goes ahead and enables the macro, Excel immediately checks if there is a subprocedure predefined in the macro to run automatically once the document opens; in this case, auto_open(). The Visual Basic for Applications (VBA) code written within this subprocedure creates a new macrosheet and then writes Excel 4.0 formulas in several of its cells. Next, it jumps to one cell in this sheet by calling the Application.Run method. In this way, the VBA code starts the Excel 4.0 macro code that was just written to the macrosheet.”

It is little wonder that Microsoft’s security teams have moved to improve the security of macros through several updates including disabling macros by default.

This also means that educating staff as to the dangers of enabling macros and the various tricks employed by hackers to get users to enable the feature if disabled is a far simpler process when compared to explaining exactly how the malware operates.