In a recent series of blog posts security firm Sekoia detailed its reemergence and provided a detailed technical analysis of the new version.

The first part of the series describes the new versions announcement and subsequent new feature set while the second part goes into the technical aspects of the new malware. 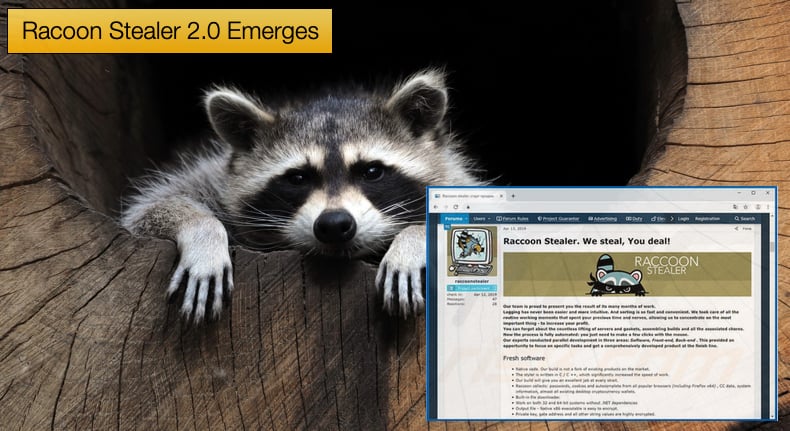 Returning to 2021 briefly, Racoon Stealer was one of the most popular malware-as-a-service offerings to cybercriminals looking to steal passwords, cryptocurrency, and other sensitive information we store on our computers.

Widely regarded as feature-rich, easy-to-use, and easily customizable the trojan with advanced spyware features proved to be a popular choice amongst cybercriminals. Version 1.0’s favored delivery method was through fake installers and cracker versions of popular software suites.

This popularity all came to a sudden stop following the outbreak of the Ukraine war when one of the malware’s admins made an announcement on a popular hacking forum, stating,

The announcement was followed by a further statement that those behind the malware were working on relaunching Racoon Stealer in the near future, to reiterate the admins said “don’t say goodbye forever” on several other forums as well. That near future has now become a reality.

This was later proved to be Racoon Stealer v2.0. Unfortunately, further analysis of this ample revealed that the new version of the malware was being distributed as early as mid-May in the wild. As for attributing the malware to Racoon Stealer’s malware developers researchers noted,

“Almost all the capabilities or technical details advertised by raccoonstealer, correspond to those observed during our malware analysis. Some properties of the malware are quite generic (collecting browser data and system information, capturing screenshot, encrypting the C2 address and strings) among the information stealing malware family, but others are rather specific and validate the attribution to Raccoon (sending data separately, the built-in file downloader, the file grabber going through all disks, and the specific loader).”

Based on researcher analysis Racoon Stealer v2.0 shares many of the features of the previous version that made it so popular, including its focus on cryptocurrency wallets. In summary, the new version has the following feature set:

Researchers also provided a step-by-step attack chain seen in the wild of the new version. Researchers stated the chain is as follows:

Given Racoon Stealer’s reputation amongst hackers, the use of the latest version can be expected to rise in the foreseeable future. Researchers believe future improvements will include a host of anti-analysis techniques and better code obfuscation.

Further, if v2.0 is to completely replace its older parent an increase in the criminal organizations infrastructure is to be expected so that users of the malware are not hampered in their information stealing by infrastructure growing pains. Upgrades to the malware to enable more efficient operations should be on security researcher radars.