In an article published by Bleeping Computer, the cyber security news platform repealed that video games publisher 2K had their gaming support system hacked to spread malware to gamers. This follows news that Steam users were being targeted by unique Browser-in-the-Browser attacks looking to phish online credentials. Gamers across the globe need to be aware that they are now favored targets for specific financially motivated hackers and known threat actor groups. 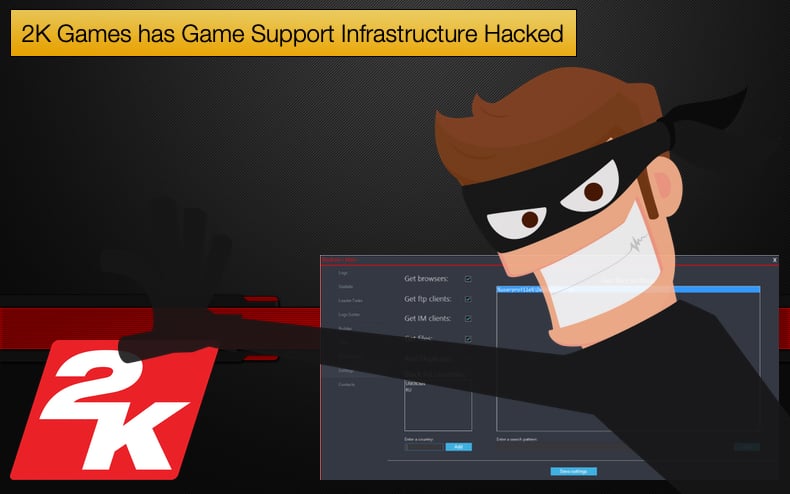 On September 20, some of the publisher's customer base began receiving emails stating that they opened support tickets on 2ksupport.zendesk.com, 2K's online support ticketing system.

Some receivers of the emails confirmed that they had indeed opened support tickets with the service while others confirmed via Twitter and Reddit that they had not opened tickets they were now receiving emails for.

Once the support ticket confirmation was sent recipients soon received another email alleging to be from a 2K support representative going by “Prince K.”

The follow-up email contained an attachment titled “2K Launcher.zip” along with the body text of “Thank you for reaching out to 2K Support! The download for the new 2K games launcher can be found below,”.

The email and subsequent attachment were discovered to have come from 2ksupport.zendesk.com, an email server controlled by 2K, and not from a suspicious server possibly linked to known threat actors.

This led security researchers to believe that 2K network infrastructure had been compromised to distribute malware to the company's customers.

Looking at the attached file for a moment. The executable stored in the .zip file is 107 MB and a quick look at the file's properties will reveal that it has not been created by 2K. The files certificate is registered to “Plumy” while the file description is given as “5K Player.”

The executable is the fact the RedLine Stealer malware which can be purchased from underground hacking forums for a few hundred dollars.

Bleeping Computer reached out to 2K for comment and the company stated,

“Earlier today, we became aware that an unauthorized third party illegally accessed the credentials of one of our vendors to the help desk platform that 2K uses to provide support to our customers…The unauthorized party sent a communication to certain players containing a malicious link. Please do not open any emails or click on any links that you receive from the 2K Games support account.”

The company further provided the following steps to assist those who may have been impacted by the attack:

Over the weekend of September 17, RockStar Games was impacted by a major data breach. Speaking to Bleeping Computer, the company stated,

“We recently suffered a network intrusion in which an unauthorized third party illegally accessed and downloaded confidential information from our systems, including early development footage for the next Grand Theft Auto. At this time, we do not anticipate any disruption to our live game services nor any long-term effect on the development of our ongoing projects. We are extremely disappointed to have any details of our next game shared with you all in this way. Our work on the next Grand Theft Auto game will continue as planned and we remain as committed as ever to delivering an experience to you, our players, that truly exceeds your expectations. We will update everyone again soon and, of course, will properly introduce you to this next game when it is ready. We want to thank everyone for their ongoing support through this situation.”

The attacks on both 2K and RockStar show the continued difficulty large companies have when looking to secure their infrastructure.

It is often not only their infrastructure but third-party software packages and hardware that can prove to be the method hackers gain access to sensitive data or operations.