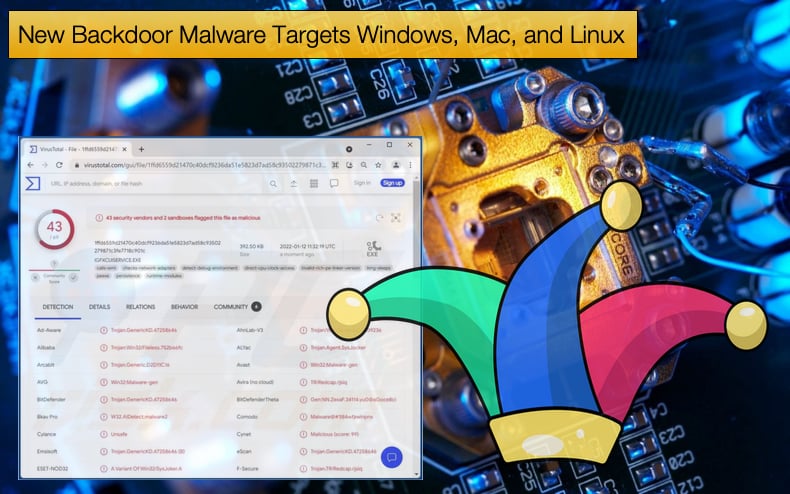 The malware, now named SysJoker, operates by creating a “backdoor” into a compromised system, generally, without being detected, that will further allow the attacker to execute commands as well as download and upload files.

Typically backdoors are used prolifically in cyber espionage operations or to act as a dropper for other malware strains. The malware is written in C++ and depending on the operating system targeted be it Windows, Mac, or Linux the code bose is altered to run on the targeted operating system.

Currently, Intezer has discovered Linux and Mac variants in the wild. At the time of writing, those variants were not being detected as malware on Virus Total.

Researchers did note that the names of the update names like "updateMacOs" and "updateSystem" are relatively generic, which is something that could potentially arouse suspicion. Based on further analysis of the malware, it was discovered that the malware started being actively deployed in attacks in the second half of 2021 and the attackers behind it are paying close attention to campaigns.

Even during the period of analysis after the malware was initially discovered in December, the command and control domain behind the attacks had changed at least three times. This indicates that those behind the campaign are actively monitoring targets.

Researchers believe that the attacker behind the campaign may be classified as an advanced threat actor given the measures adopted by the attacker.

Those measures are developing malware for the three main operating systems used in the wild and close monitoring of victims. Further, the attack on the unnamed educational system is in line with targets favored by any number of advanced threat groups.

Other indicators that an advanced threat actor is at large is that the code was written from scratch, the attack campaigns discovered are not widespread, and now second-stage payload was seen deployed. This indicates that victims are chosen in a very targeted way and by not deploying a second-stage payload the attackers may not be financially motivated.

SysJoker is not the only recently discovered malware strain discovered developed to target multiple operating systems. Also discovered by Intezer in September 2021, Vermilion Strike is a repurposed Cobalt Strike capable of targeting both Windows and Linux users.

This is novel in that while Cobalt Strike, a popular penetration testing tool also used by threat actors, has a Windows version but to the best of the writer’s knowledge, no official Linux distribution is available. Researchers noted,

“In August 2021, we at Intezer discovered a fully undetected ELF implementation of Cobalt Strike’s beacon, which we named Vermilion Strike. The stealthy sample uses Cobalt Strike’s Command and Control (C2) protocol when communicating to the C2 server and has Remote Access capabilities such as uploading files, running shell commands, and writing to files. The malware is fully undetected in VirusTotal at the time of this writing and was uploaded from Malaysia.
Based on telemetry with collaboration from our partners at McAfee Enterprise ATR, this Linux threat has been active in the wild since August targeting telecom companies, government agencies, IT companies, financial institutions, and advisory companies around the world. Targeting has been limited in scope, suggesting that this malware is used in specific attacks rather than mass spreading.”

Like SysJoker, it appears Vermilion Strike is used primarily for espionage purposes given the feature set copied over from Cobalt Strike.

Researchers also believe that the attacker is skilled in that the malware’s codebase has not been seen before and the fact that it targets specific entities in the wild. Regarding Vermilion Strike, researchers concluded,

“Vermilion Strike and other Linux threats remain a constant threat. The predominance of Linux servers in the cloud and its continued rise invites APTs to modify their toolsets in order to navigate the existing environment…Vermilion Strike is not the only Linux port of Cobalt Strike’s Beacon. Another example is the open-source project geacon, a Go-based implementation. Vermilion Strike may not be the last Linux implementation of Beacon.”

There are several reasons why more attention should be paid to Linux-based malware. One of the biggest reasons is the low detection rates of known Linux malware strains. This is due in part to several reasons but one of the major contributors to this fact is the rapid adoption of cloud computing.

This has placed increasing reliance on Linux web servers, for example, for cost and ease of deployment through popular cloud services providers. In helping to mitigate the impact of Linux malware the following security measures can be taken: