Antivirus 8 - How to remove?

This fake antivirus program will try to trick you into purchasing the full version by displaying various security warnings. This rogue program is mostly distributed through websites offering free security scans. These scans will report that your computer is infected and that you should download Antivirus 8 to clean your system. After infection, this fake scanner starts automatically on every system start up - performing a fake scan and instructing you to purchase a full version of the software to clean the ‘detected’ infections. Do not purchase this fake program, it is a scam. 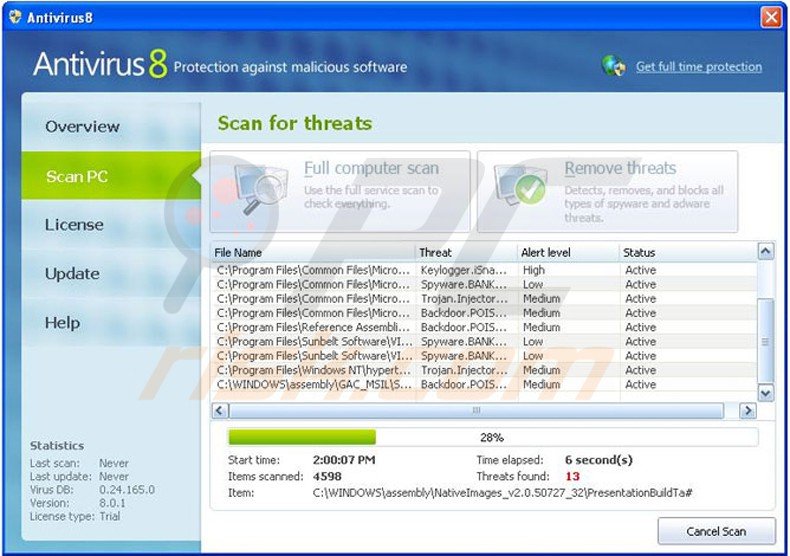 When Antivirus 8 infects your computer, you may observe the following security warnings:

“Warning! Identity theft attempt detected! Attacker IP: Attack Target: Microsoft Corp. Keys Description: Remote host attempting to gain access to your personal information.”
“This copy of AV is not genuine. You may be a victim of software counterfeiting. This copy of Antivirus 8 is not genuine and is not eligible to receive the full range of upgrades and product support from Microsoft. Warning! Active virus detected! Threat detected: Keylogger.iSnake.PRO Infected file: C:\Windows\System32\cmd.exe”
“Warning! New Virus Detected! Threat Detected: Email-Worm.Zhelatin Infected file: Description: Worm Email-Worm.Zhelatin.vy is virus-like malware with destructive code, and is able to mutate by replacing its own code. This makes Email-Worm.Zhelatin.vy very dangerous, hard to find, and difficult to delete. Like most viruses, worm Email-Worm-Zhelatin.vy may spread to other computers by secretly emailing themselves to Internet users in your address book.”

If you notice Antivirus 8 on your computer, you should remove it immediately. This program is distributed by Internet criminals who use various Trojans and other devious methods to spread their rogue programs. When installed on your computer, Antivirus 8 will block execution of legitimate Windows programs, making its removal problematic. This bogus program encourages you to believe that it is the only program able to save your PC from spyware and malware purportedly attacking your machine. In fact, your computer is unlikely to have any infection and the security threats that Antivirus 8 ‘detects’ are completely fake. This program's purpose is to sell you a license to remove the non-existent security issues from your computer. Follow the Antivirus 8 removal guide to completely remove it from your computer.

4. Download Hitman Pro (30 day trial) and run a scan. After this procedure, download and install a legitimate spyware remover to completely remove the infection.

You can also try entering this activation code: ABC12-DEF34-GHI56-JKL789. If it works, Antivirus 8 will be disabled and you will be able to download and install legitimate antispyware software to completely cleanse your computer of this rogue software.

If you are unable to remove Antivirus 8, you can use these manual removal instructions. Use them at your own risk, since if you do not have strong computer knowledge, you could harm your operating system. Use them only if you are an experienced computer user. (Instructions on how to end processes, remove registry entries...)

Computer users who are dealing with a rogue security software shouldn't buy it's full version. By paying for a license key of a fake antivirus program users would send their money and banking information to cyber criminals. Users who have already entered their credit card number (or other sensitive information) when asked by such bogus software should inform their credit card company that they have been tricked into buying a rogue security software. Screenshot of a web page used to lure computer users into paying for a non-existent full version of antivirus8 and other rogue antivirus programs:

To protect your computer from antivirus8 and other rogue antivirus programs users should:

If you are experiencing problems while trying to remove antivirus8 from your computer, please ask for assistance in our malware removal forum.

If you have additional information on antivirus8 or it's removal please share your knowledge in the comments section below.

A QR code (Quick Response Code) is a machine-readable code which stores URLs and other information. This code can be read using a camera on a smartphone or a tablet. Scan this QR code to have an easy access removal guide of Antivirus8 on your mobile device.
We Recommend: