Programs such as PC Security 2011 are designed to scare people into purchasing a license. If you fall for this trick, your banking information could be at risk.

Therefore, if you have already bought this fake security program, contact your credit card company and explain that you have been tricked into buying a fake antivirus program. PC Security 2011 is programmed to launch on each system start up.

It will then perform a computer security scan and inform you that your computer is at risk and the only way to fix your computer problems is to buy a full version of this fake scanner. 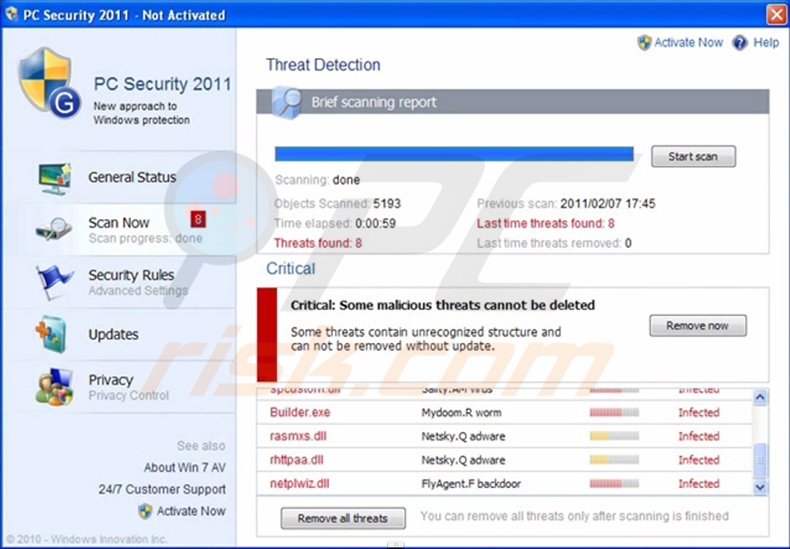 Do not buy this program, it is a scam. The following fake security warnings may appear on your screen when your system is infected with PC Security 2011:

“New threads were found. There are 4 undeleted threads. To remove all threads, click ‘Remove All’ at the main window.”
“Scanning is complete. 4 infections were found - Sdbot.add, DvFuCa, Angerfire, FlyAgent.F. Would you like to remove all?”
“A backdoor has been detected on your PC. A Trojan that has backdoor capabilities may perform certain actions based on the commands of a remote attacker and commonly steals user credentials.”
“Stealth intrusion! Infection detected in the background. Your computer is now attacked by spyware and rogue software. Eliminate the infection safely, perform a security scan and deletion now.”

These security warnings are fake. You should remove PC Security 2011 from your computer immediately.

PC Security 2011 does not actually scan your computer for security issues - this process is imitated to scare you into believing that your PC is at risk. This is a strategy used by Internet criminals to sell you a license for their rogue program, PC Security 2011.

Do not consider buying this program, you will lose your money and your PC will remain infected with this bogus program. Do not hesitate to remove this fake security scanner from your computer using the removal guide provided.

3. Press ctrl+alt+del (or ctrl+shift+esc), to enter Task Manager. [if this does not work, try clicking Start, selecting Run and typing taskmgr]. Then, select the "Processes" tab.

4. In Task Manager, search for a process named "PC2011.exe". Select this process and click "End Task".

5. You should now be able to access your desktop. Download a legitimate anti-spyware software to fully remove PC Security 2011 from your computer.

If you are unable to remove PC Security 2011, you can use these manual removal instructions. Use them at your own risk, since if you do not have strong computer knowledge, you could harm your operating system.

Computer users who are dealing with a rogue security software shouldn't buy it's full version. By paying for a license key of a fake antivirus program users would send their money and banking information to cyber criminals. Users who have already entered their credit card number (or other sensitive information) when asked by such bogus software should inform their credit card company that they have been tricked into buying a rogue security software. Screenshot of a web page used to lure computer users into paying for a non-existent full version of pc security 2011 rogue and other rogue antivirus programs:

To protect your computer from pc security 2011 rogue and other rogue antivirus programs users should:

If you have additional information on pc security 2011 rogue or it's removal please share your knowledge in the comments section below.

Scan this QR code to have an easy access removal guide of PC Security 2011 Rogue on your mobile device.
We Recommend: