What is Antivirus Center?

Antivirus Center is an imitation of a genuine security program. This fake software is distributed by Internet criminals who use various misleading methods to install this rogue program on users' PCs.

The bogus software is distributed through infected websites. Usually, an ad appears on your screen purporting to scan your computer.

After the 'scan', the ad informs you that your computer is infected and you are advised to download Antivirus Center in order to remove these infections. 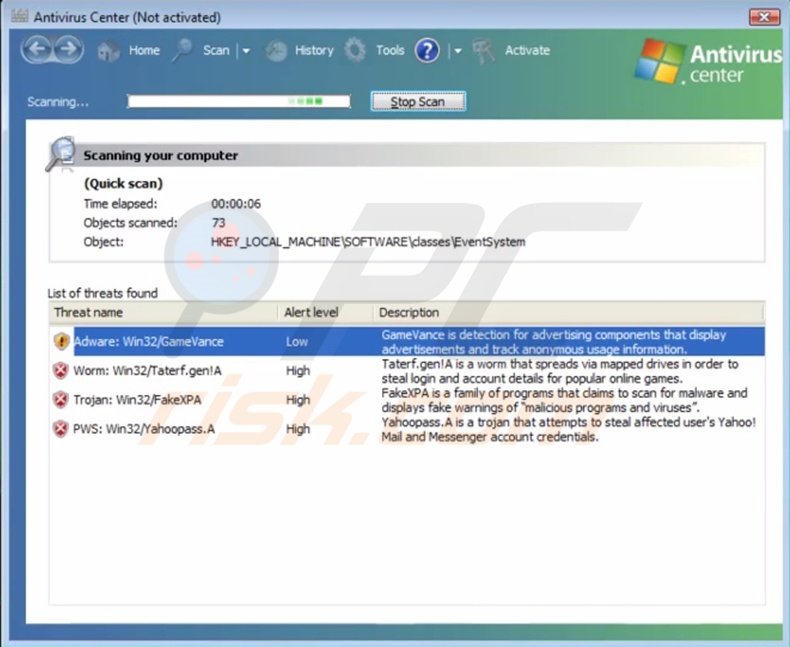 Another way in which this bogus antivirus infiltrates your computer is by a fake Flash update. For example, when you enter a website, a video screen appears and when you click 'Play' to see the video, a pop-up appears stating that your Flash player is out of date.

You will be asked to update the Flash software in order to play the video. If you agree, you are presented with a fake antivirus program called Antivirus Center.

This program self-installs on your system and performs a fake security scan on system start-up (it configures itself to run automatically on every system start-up without your permission).

After the fake scan, a list of infections is displayed, and to remove these, you are asked to purchase (activate) this fake security software. This  bogus scanner also displays various security warning messages in order to further scare you into purchasing a fake license.

Ignore the warning messages and the fake scans.

This program is useless and created with one purpose - to steal money from your credit card account. If by mistake you have already bought this fake antivirus program, you should contact your credit card company and explain that you have been tricked into purchasing a fake computer security program.

You should dispute the charges and consult your banking security information. Often, it is advisable to change your credit card number in order to be safe.

The distributors of fake programs such as Antivirus Center, not only trick people into purchasing fake licenses, but are also known to sell users' banking information to other Cyber criminals. This leads to a situation whereby further funds are stolen from your account.

The following fake security warning messages will be displayed by Antivirus Center:

Ignore these fake alerts and remove this rogue scanner from your PC as soon as possible.

If you are unable to remove Antivirus Center, you can use these manual removal instructions. Use them at your own risk, since if you do not have strong computer knowledge, you could harm your operating system.

Computer users who are dealing with a rogue security software shouldn't buy it's full version. By paying for a license key of a fake antivirus program users would send their money and banking information to cyber criminals. Users who have already entered their credit card number (or other sensitive information) when asked by such bogus software should inform their credit card company that they have been tricked into buying a rogue security software. Screenshot of a web page used to lure computer users into paying for a non-existent full version of antivirus center rogue and other rogue antivirus programs:

To protect your computer from antivirus center rogue and other rogue antivirus programs users should:

If you have additional information on antivirus center rogue or it's removal please share your knowledge in the comments section below.

Scan this QR code to have an easy access removal guide of Antivirus Center Rogue on your mobile device.
We Recommend: