Milestone Antivirus is a fake computer security scanner. This rogue antivirus program is propagated via Trojans. When your machine is infected with this fake program, you will notice various 'security scans' being performed.

These scans are fake, since Milestone Antivirus does not actually scan your computer - it merely imitates the scanning process. The files that this program reports as being infected, are legitimate Windows files, so do not remove them manually or you could damage your operating system.

When the program is installed on your computer, it configures itself to run automatically each time you start your computer. You will see a fake security scan being performed, and if you click the "Remove Threats" button at the end of the fake scan, you will be encouraged to purchase a full version of the program.

You should not buy this program, it is a scam and completely useless. Security warning messages are displayed to further scare you into believing that your computer is infected with malware.

Milestone Antivirus generates warning pop-ups designed to coerce PC users into activating a full version of this rogue software. All of the features offered by this bogus program are fake.

Milestone Antivirus offers to protect your privacy, but in fact this software is only an imitation of a legitimate antivirus software. 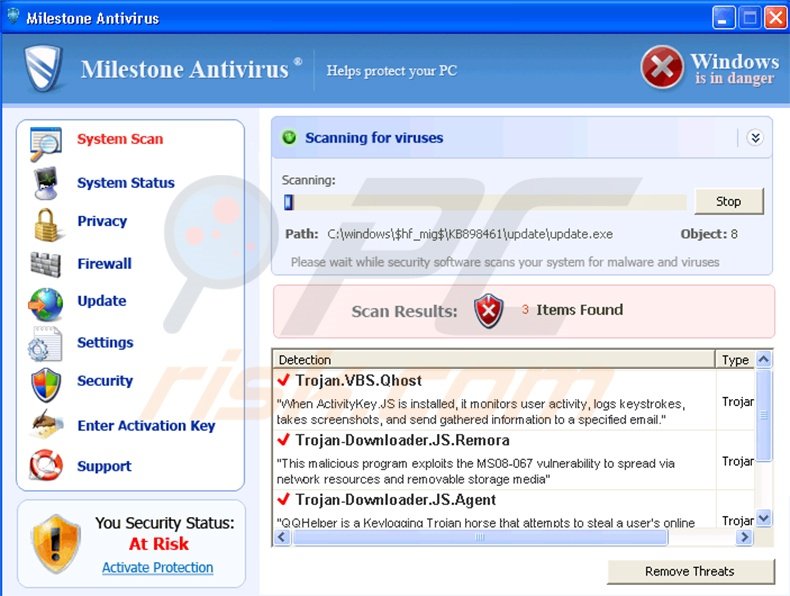 Do not be impressed by the professional appearance of this program. Milestone Antivirus was developed by Internet criminals who make money from unsuspecting PC users who fall for their trickery and purchase a license in order to remove supposed 'security threats' that do not actually exist. Use this step-by-step removal guide to eliminate this malicious software from your system.

The following fake security warning messages will be generated by Milestone Antivirus:

"Security Warning. Your computer continues to be infected with harmful viruses. In order to prevent permanent loss of your information and credit card data theft, please activate your antivirus software. Click here to enable protection."

Before downloading, enter this registration key: significantother in the registration window. It will not remove the infection, but will enable some disabled Windows features.

If you are unable to remove Milestone Antivirus, you can use these manual removal instructions. Use them at your own risk, since if you do not have strong computer knowledge, you could harm your operating system. Use them only if you are an experienced computer user. (Instructions on how to end processes, remove registry entries...)

Computer users who are dealing with a rogue security software shouldn't buy it's full version. By paying for a license key of a fake antivirus program users would send their money and banking information to cyber criminals. Users who have already entered their credit card number (or other sensitive information) when asked by such bogus software should inform their credit card company that they have been tricked into buying a rogue security software. Screenshot of a web page used to lure computer users into paying for a non-existent full version of milestone antivirus rogue and other rogue antivirus programs:

To protect your computer from milestone antivirus rogue and other rogue antivirus programs users should:

If you have additional information on milestone antivirus rogue or it's removal please share your knowledge in the comments section below.

Scan this QR code to have an easy access removal guide of Milestone Antivirus Rogue on your mobile device.
We Recommend: