What is Enhanced Protection Mode?

Enhanced Protection Mode is a fake message displayed by Trojan.FakeAV.LVT. Your computer could have become infected with this Trojan if you were tricked into downloading fake Flash Player updates. When installed on your PC, this Trojan displays a fake message reporting that your computer is infected with backdoor.11.Win32.xnco. To remove this 'detected' threat, you will be prompted to reboot your computer, and if you agree, your operating system boots in Safe Mode with only a blank page displayed. After this procedure, your computer is restarted in Normal Mode, and if you click on the icon of your antivirus program, you are presented with a message reporting that your antivirus program is operating in Enhanced Protection Mode.

While other fake antivirus programs attempt to trick you into believing that your computer is highly infected, and then offer the purchase of a fake license, Enhanced Protection Mode infection operates differently. Internet criminals created this Trojan to download malicious programs to your computer without your knowledge. The program is designed to assure you that there is no problem with your system, whilst in the background it downloads and installs various malware. This infection also modifies your Hosts file, leading to redirects whilst browsing the Internet. You should remove Enhanced Protection Mode from your computer immediately to prevent further infections being downloaded to your PC.

The following is a fake message used by Trojan.FakeAV.LVT. to install an Enhanced Protection Mode infection on your computer:

"Attention! [legitimate antivirus name] operates under Enhanced Protection Mode. This is a temporary measure necessary for immediate response to the threat from a virus!"

Examples of legitimate antivirus names used by this Trojan: 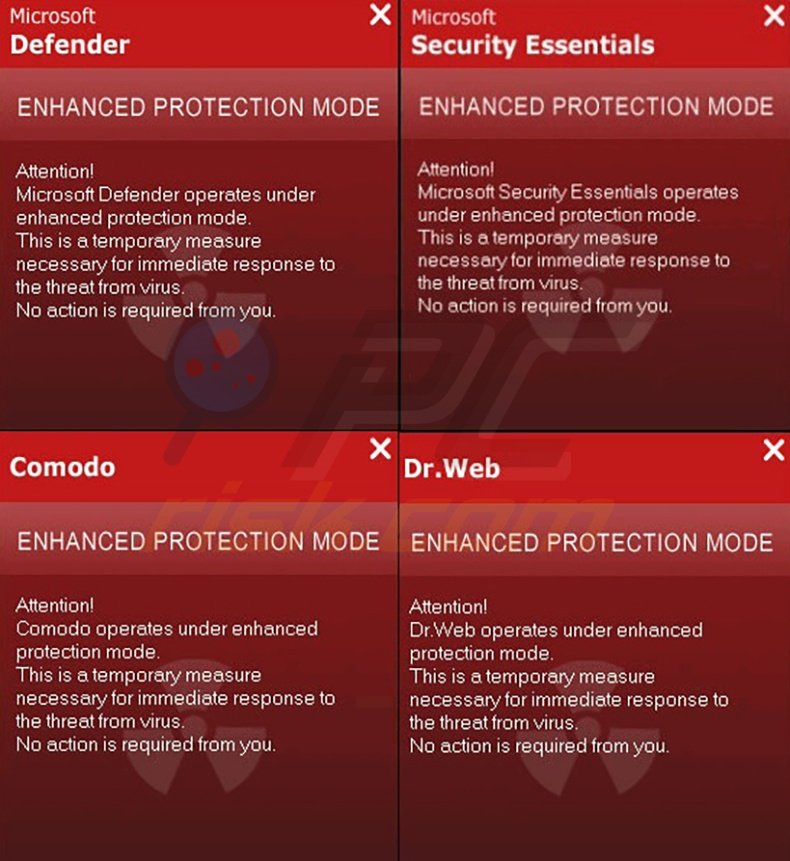 NOTE: Some spyware can block the downloading of spyware removers. If you cannot download it using the default location, try one of the alternative download locations below:

If you still cannot download or install spyware removal software, you can try our Custom installer designed by our technicians to break through malware infections.

4. Enhanced Protection Mode modifies the system Hosts file. It is used to resolve canonical names of websites to IP addresses. When it is modified, the user may be redirected to malicious sites, despite a legitimate URL apprearing in address bar. It is difficult to determine whether the site is genuine when the Hosts file is modified. To fix this, please download the Microsoft FixIt tool that restores your hosts file to the Windows default. Run this tool when downloaded and follow the on-screen instructions. The download link is as follows:

5. Download and install the spyware remover to completely remove the infection.

NOTE: Some spyware can block the downloading of spyware removers. If you cannot download it using the default location, try one of the alternative download locations below:

If you are unable to remove Enhanced Protection Mode, you can use these manual removal instructions. Use them at your own risk, since if you do not have strong computer knowledge, you could harm your operating system. Use them only if you are an experienced computer user. (Instructions on how to end processes, remove registry entries...)

Computer users who are dealing with a rogue security software shouldn't buy it's full version. By paying for a license key of a fake antivirus program users would send their money and banking information to cyber criminals. Users who have already entered their credit card number (or other sensitive information) when asked by such bogus software should inform their credit card company that they have been tricked into buying a rogue security software. Screenshot of a web page used to lure computer users into paying for a non-existent full version of trojan.fakeav.lvt and other rogue antivirus programs:

To protect your computer from trojan.fakeav.lvt and other rogue antivirus programs users should:

If you are experiencing problems while trying to remove trojan.fakeav.lvt from your computer, please ask for assistance in our malware removal forum.

If you have additional information on trojan.fakeav.lvt or it's removal please share your knowledge in the comments section below.

A QR code (Quick Response Code) is a machine-readable code which stores URLs and other information. This code can be read using a camera on a smartphone or a tablet. Scan this QR code to have an easy access removal guide of Trojan.FakeAV.LVT on your mobile device.
We Recommend: