System Security 2011 is a fake computer security scanner that attempts to trick computer users into purchasing a fake license. This bogus program is derived from the same family of rogue scanners as Cloud Protection, Guard Online, and many others.

Like its previous version, System Security 2011 is proliferated through misleading websites that exploit various security vulnerabilities in users' PCs to install rogue programs. This fake computer scanner is installed on your computer along with a rootkit infection that makes System Security 2011 harder to remove.

The rootkit blocks legitimate security scanners that try to scan your computer. To remove this bogus scanner, you need to eliminate the rootkit infection first.

When infected with System Security 2011, a security scan is performed each time you boot your operating system and your desktop will be flooded with various security warning alerts. 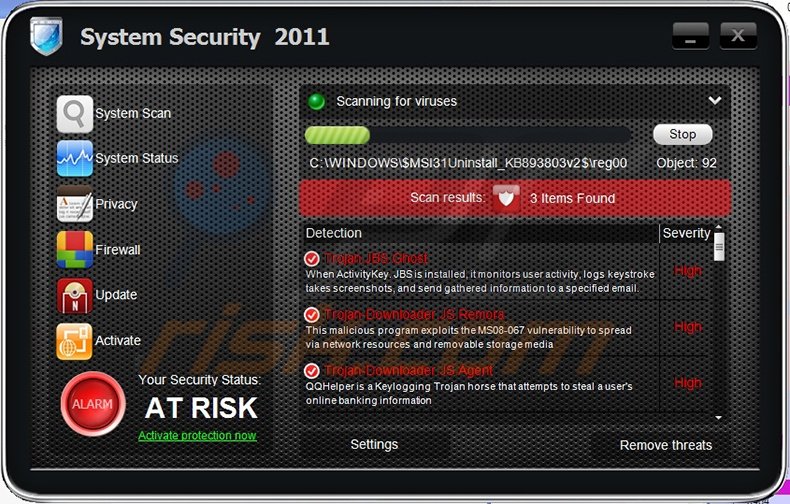 Ignore these scans and pop-up messages, they are fake. System Security 2011 imitates the security scans, which are performed to scare you into believing that your computer has serious security issues.

Internet criminals hope that you will purchase a fake license for this program. Ignore the messages displayed by System Security 2011 and remove it from your computer immediately.

The security issues 'detected' by this bogus program, do not exist - this is simply a misleading strategy used by Internet criminals who create fake security scanners. This program has the appearance of an antivirus program, but it does posses any of the functionality required of legitimate security software and has no capability to detect security infections on your PC.

System Security 2011 is malicious software and you should not hesitate in eliminating it from your computer.

The following fake pop-up messages will be displayed on a computer infected with System Security 2011:

"Warning! Infection found. Unwanted software (malware) or tracking cookies have been found during last scan. It is highly recommended to remove it from your computer. Keylogger Zeus was detected and put in quarantine. Keylogger Zeus is a very dangerous software used by criminals to steal personal data such as credit card information, access to banking accounts, passwords to social networks and e-mails."

These security warnings are fake. If you notice that your computer is infected with System Security 2011, you should remove it immediately.

Step 1
Enter any one of these System Security 2011 activation keys in the registration window. Click the 'Enter Activation key' button located at the bottom-left corner of the main program window and paste only one of these keys (each key is on a separate line):

When the registration key is entered, System Security 2011 will behave as if you have purchased it and will stop generating fake warnings. It will also enable some previously disabled Windows features.

Note that registering this program will not remove it from your PC. It will simply disable the fake warnings.

Step 2
This infection is known to modify your proxy settings. It intercepts your connection to the Internet and you may not be able to access certain Internet resources.

To fix this, download and run the proxy removal tool. This tool runs automatically - simply double click it and it will do the job.

After fixing the proxy settings, you will be able to download the spyware remover.

Step 3
Download, install and run the spyware removal tool. It will scan your PC for malware infections.

If installation fails, you can try downloading the customized installer developed by our technicians to bypass the System Security 2011 spyware infection. Your browser may report that this file is unsafe. Please ignore these warnings. Download customized installer

Computer users who are dealing with a rogue security software shouldn't buy it's full version. By paying for a license key of a fake antivirus program users would send their money and banking information to cyber criminals. Users who have already entered their credit card number (or other sensitive information) when asked by such bogus software should inform their credit card company that they have been tricked into buying a rogue security software. Screenshot of a web page used to lure computer users into paying for a non-existent full version of system security 2011 rogue and other rogue antivirus programs:

To protect your computer from system security 2011 rogue and other rogue antivirus programs users should:

If you have additional information on system security 2011 rogue or it's removal please share your knowledge in the comments section below.

Scan this QR code to have an easy access removal guide of System Security 2011 Rogue on your mobile device.
We Recommend: