How to unblock your computer after fake Microsoft Security Essentials alert?

What is Fake Microsoft Security Essentials? 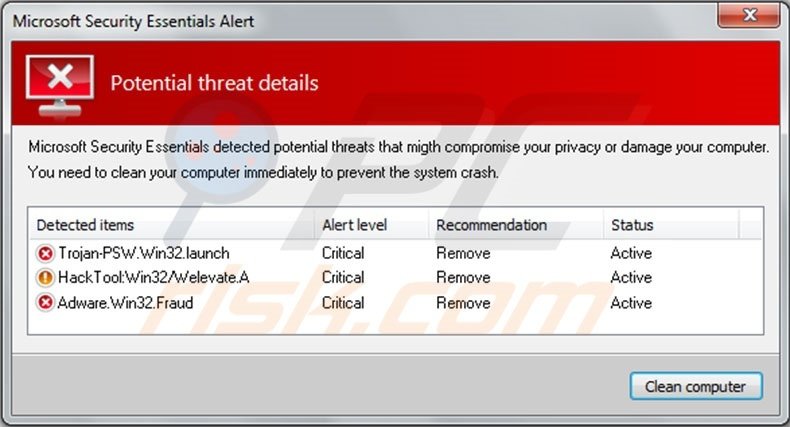 This ransomware is slightly different to others, in that it actively infects Internet users worldwide - attempting to sell a non existent security update using the name of legitimate antivirus software. Other similar ransomware scams use the names of authorities and demand that you pay a fine for distributing copyrighted content. The deceptive message displayed by this ransomware also states that your computer is highly infected with viruses - a similar misleading technique used by fake antivirus programs to trick PC users. In fact, none of the security infections reported by this screen locker actually exist on your computer, therefore, ignore this message and do not pay for this fake MSE update.

Do not trust this message, it is a scam. Microsoft Security Essentials never requests payment for updates. This ransomware translates its misleading message into your language using your computer's IP address. To remove this scam from your PC, use the removal guide provided:

Microsoft Security Essentials Alert.
Your system has been blocked for security reasons.
Microsoft Security Essentials detected potential threats! Your system has reached the critical security level, because of visiting sites with infected and pornographic content. Its further use may lead to system collapse and complete loss of information. To restore Your Windows system performance, you need to download and install an additional module of the dynamic proactive protection. This module is an optional paid update for especially infected Windows systems. It eliminates the cause of system slowdown, associated with the presence of difficult-found malicious software, prevents the system crash and stabilize its operation. Recommendation: Download and install proactive protection module.
Computer status - At risk. To install this update please insert below Ukash or Paysafecard voucher pin-code. You can buy this voucher at the nearest press salon Inmedio, Inmedio Cafe, Relay and 1-Minute. After your payment is done, Your computer will be immediately updated and protected, all Trojans and viruses will be removed. 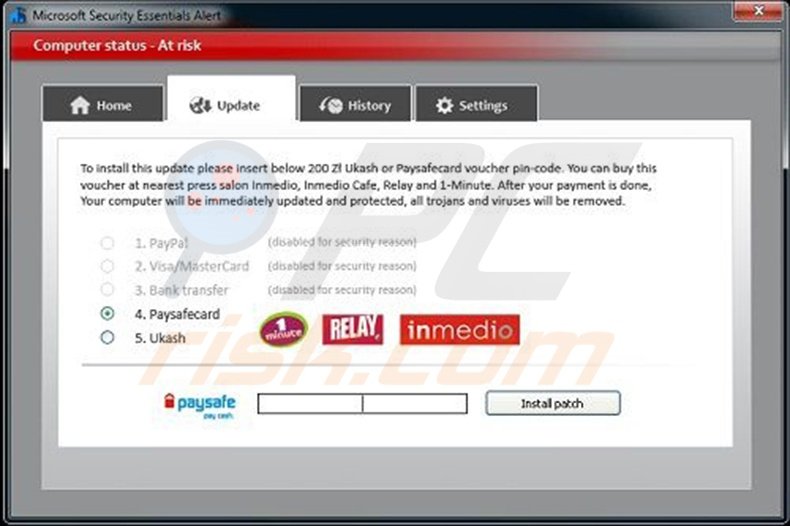 Log in to the account that is infected with Fake Microsoft Security Essentials alert. Start your Internet browser and download a legitimate anti-spyware program. Update the anti-spyware software and start a full system scan. Remove all the entries detected.

1. During your computer starting process, press the F8 key on your keyboard multiple times until the Windows Advanced Options menu appears, and then select Safe Mode with Command Prompt from the list and press ENTER. 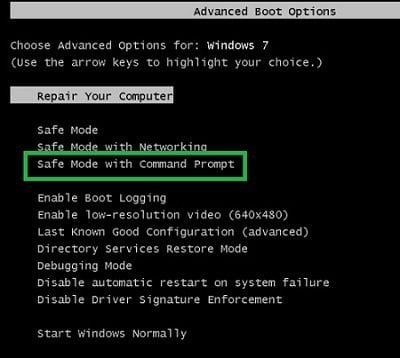 2. In the opened command prompt type explorer and press Enter. This command will open explorer window. Do not close it and continue to the next step.

3. In the Command Prompt type regedit and press Enter. This will open the Registry Editor window.

4. In the Registry Editor window, navigate to HKEY_LOCAL_MACHINE\SOFTWARE\Microsoft\Windows NT\CurrentVersion\Winlogon\

5. In the right side of the window, locate "Shell" and right click on it. Click on Modify. The default value in the Data column is Explorer.exe - if you see something else displayed in this window, remove it and type Explorer.exe (take a note of whatever else was displayed in the Data column - this is the path of the rogue execution file). Use this information to navigate to the rogue executable and remove it.

If you cannot start your computer in Safe Mode with Networking (or with Command Prompt), boot your computer using a rescue disk. Some variants of ransomware disable Safe Mode, making its removal more complicated. For this step, you need access to another computer. After removing fake Microsoft Security Essentials alert from your PC, restart your computer and scan it with legitimate antispyware software to remove any possible remnants of this security infection.

Computer users who are dealing with a rogue security software shouldn't buy it's full version. By paying for a license key of a fake antivirus program users would send their money and banking information to cyber criminals. Users who have already entered their credit card number (or other sensitive information) when asked by such bogus software should inform their credit card company that they have been tricked into buying a rogue security software. Screenshot of a web page used to lure computer users into paying for a non-existent full version of microsoft security essentials virus and other rogue antivirus programs:

To protect your computer from microsoft security essentials virus and other rogue antivirus programs users should:

If you are experiencing problems while trying to remove microsoft security essentials virus from your computer, please ask for assistance in our malware removal forum.

If you have additional information on microsoft security essentials virus or it's removal please share your knowledge in the comments section below.

A QR code (Quick Response Code) is a machine-readable code which stores URLs and other information. This code can be read using a camera on a smartphone or a tablet. Scan this QR code to have an easy access removal guide of Microsoft Security Essentials Virus on your mobile device.
We Recommend: