What is Galileo System Cleaner?

In fact, the security issues found by this program do not exist - Galileo System Cleaner is merely an imitation of legitimate antivirus software. It is a scam created with the sole purpose of tricking PC users into paying money to Cyber criminals responsible for creating and distributing this malicious program.

Galileo System Cleaner is simply an empty software shell, which imitates the scanning of your computer (and it does not comprise a virus definition database or any other features required of a legitimate security scanner). 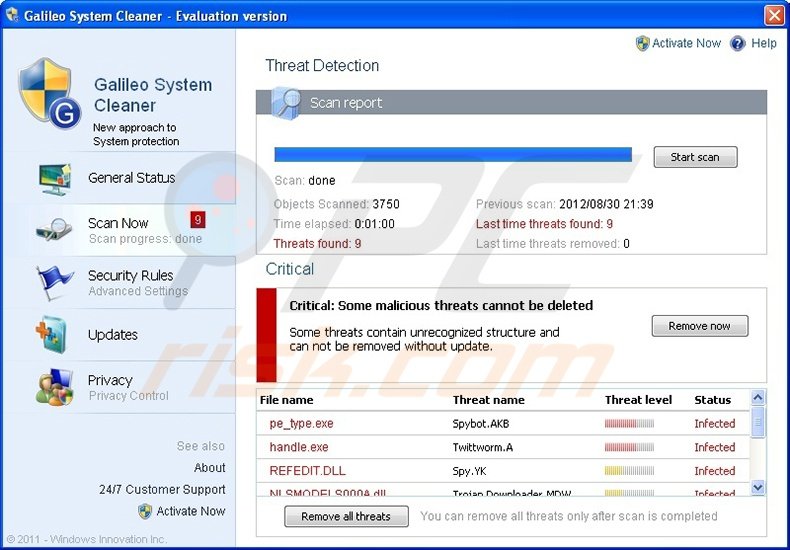 Furthermore, this program generates false security warning messages and uses other deceptive methods to coerce PC users into paying for the full version. In truth, there is no full version of Galileo System Cleaner - it is scam and should be eliminated from your computer immediately. Do not purchase this program - you will lose your money and your PC will remain infected.

Today, the Internet is rife with these bogus programs, which merely imitate the functionality of security software with the aim to steal money from your credit card. Always read reviews and other information available before buying security software to protect your PC.

Cyber criminals responsible for creating Galileo System Cleaner use Trojans and drive-by downloads to proliferate their fake antivirus program. Another known way that they distribute this malicious software is via exploit kits.

If your computer is infiltrated with the aforementioned security infections, Galileo System Cleaner and other rogue programs could be downloaded and executed on your machine at any time. In essence, Cyber criminals are able to infiltrate computers connected to the Internet with a small portion of malicious code and then remotely install key-loggers, rogue antivirus programs, and other malware to the compromised machines.

To prevent these attacks on your PC, always use legitimate antivirus and anti-spyware programs. If your PC is already infected with Galileo System Cleaner, use the removal guide provided to eliminate it from your computer.

Critical: Some malicious threats cannot be deleted. Some threats contain unrecognized structure and can not be removed without update.

Use the recommended malware removal software to remove this malicious program. Download, update, and run a full system scan, remove all entries that this software detects.

Now remove the proxy settings. This fake antivirus program adds a proxy to your Internet connection settings to show various errors when you try to access Internet.

To do this, open Internet Explorer, click Tools and select Internet Options. Then select the "Connections" tab.

In the "Connections" tab, click LAN settings, if 'Use a proxy server for your LAN' is checked, uncheck it and press OK.

After removing Galileo System Cleaner, you will need to reset your Hosts file. Do not skip this step, since this malware modifies your Hosts file and you will encounter browser redirect problems if malicious entries are not removed.

It is difficult to determine sites are genuine when the Hosts file is modified. To fix this, please download the Microsoft Fix It tool, that restores your Hosts file to the Windows default.

Computer users who are dealing with a rogue security software shouldn't buy it's full version. By paying for a license key of a fake antivirus program users would send their money and banking information to cyber criminals. Users who have already entered their credit card number (or other sensitive information) when asked by such bogus software should inform their credit card company that they have been tricked into buying a rogue security software. Screenshot of a web page used to lure computer users into paying for a non-existent full version of galileo system cleaner rogue and other rogue antivirus programs:

To protect your computer from galileo system cleaner rogue and other rogue antivirus programs users should:

If you have additional information on galileo system cleaner rogue or it's removal please share your knowledge in the comments section below.

What is the purpose of a fake anti-virus?

Fake anti-viruses, like other types of unwanted applications, are designed to generate revenue for their developers. Typically, fake security software claims to detect various threats on users' devices and requests activation (purchase) to remove them. However, neither the found issues nor the promised system cleaning functionalities are genuine. It is noteworthy that unwanted apps can also profit by running intrusive advertisement campaigns, causing redirects, or collecting private data.

Unwanted apps, such as fake anti-viruses, are usually considered legal because their End User License Agreements (EULA) provide information about their potential behavior.

Is having Galileo System Cleaner installed on my computer dangerous?

Yes, Combo Cleaner can scan computers and eliminate detected unwanted applications, including fake anti-viruses. It has to be mentioned that manual removal (unaided by security software) might be ineffective. In some instances, even after the unwanted app has been (manually) removed - various remnants (files) stay within the system. Furthermore, the remaining components can continue running and causing issues. Therefore, thoroughness is crucial for the removal of such software.

Scan this QR code to have an easy access removal guide of Galileo System Cleaner Rogue on your mobile device.
We Recommend: