Initially, this rogue program presents users with a fake online security warning message stating that the computer may have been infected with spyware or other high-risk malware. Internet users should be aware that these online security threats (indicating pop-ups) are false and used by a bogus support company in order to deceive computer users. 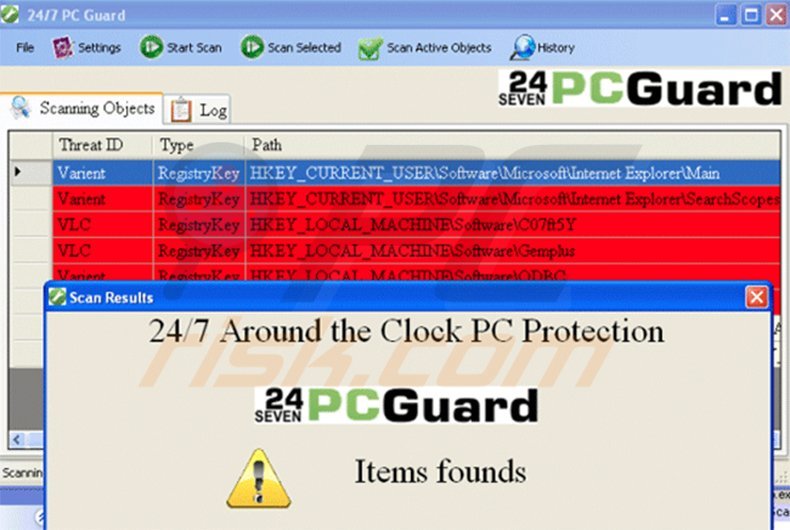 A screenshot of a fake security warning pop-up used to deceive Internet users into calling the bogus 24/7 PC Guard support:

You are visiting a high risk website Urgent: Your files and identity may be at risk
You may have been infected with Spyware
Call 1-(888) 297 8734 for immediate support

Do not trust any of these online warning messages - they are part of a scam. The second part of this virus removal support scam takes place when computer users call the number provided within the fake security warning messages.

The company providing these rogue services, use legitimate software for coordinating remote support, however, after connecting to users' computers, they install a fake antivirus program called 24/7 PC Guard. This runs a fake security scan and reports bogus security infections.

A screenshot of the fake antivirus program, "24/7 PC Guard": 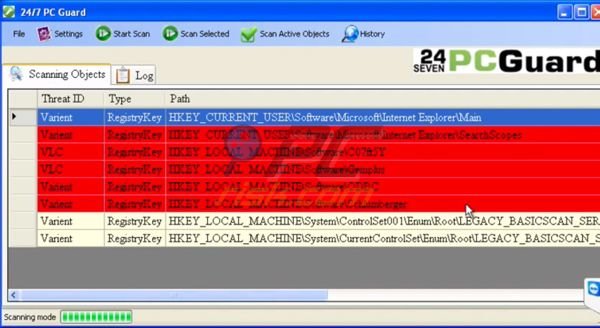 Note that currently, it is straightforward to determine that this a fake security scanner, since the security scan displayed by 24/7 PC Guard runs for only a few of seconds (a clear indication that you are dealing with a rogue program).

The 24 Seven PC Guard support service and associated program are a scam. This is a bogus support company using a fake antivirus program in order to trick unsuspecting PC users into purchasing their costly and useless Support Plan.

A screenshot of the PC Guard Support payment page:

In summary, Internet users should be aware that there are many virus removal support companies using deceptive methods to attract their customers. Never trust online security warning messages stating that your computer is infected and encouraging you to perform certain tasks such as calling support, downloading antivirus programs, etc.

When allowing access to your computer (using Team Viewer or other remote support software), ensure that you deal with legitimate companies such as Norton or McAfee. If you wish to check whether your computer is infected with malware or viruses, use legitimate antivirus and anti-spyware software.

Computer users who are dealing with a rogue security software shouldn't buy it's full version. By paying for a license key of a fake antivirus program users would send their money and banking information to cyber criminals. Users who have already entered their credit card number (or other sensitive information) when asked by such bogus software should inform their credit card company that they have been tricked into buying a rogue security software. Screenshot of a web page used to lure computer users into paying for a non-existent full version of 24/7 pc guard fake phone support and other rogue antivirus programs:

To protect your computer from 24/7 pc guard fake phone support and other rogue antivirus programs users should:

If you have additional information on 24/7 pc guard fake phone support or it's removal please share your knowledge in the comments section below.

Scan this QR code to have an easy access removal guide of 24/7 PC Guard Fake Phone Support on your mobile device.
We Recommend: