What is XP Micro Antivirus?

They then offer downloads, which supposedly remedy these issues. Internet users should be aware that XP Micro Antivirus is a scam, a malicious online ad with none of the features required to scan or detect possible malware or virus infections.

Commonly, such ads are delivered by deceptive ad networks and malicious websites, thus, computer users who fall for this trickery download the suggested program and inadvertently infect their computers with fake antivirus or rogue optimization software. 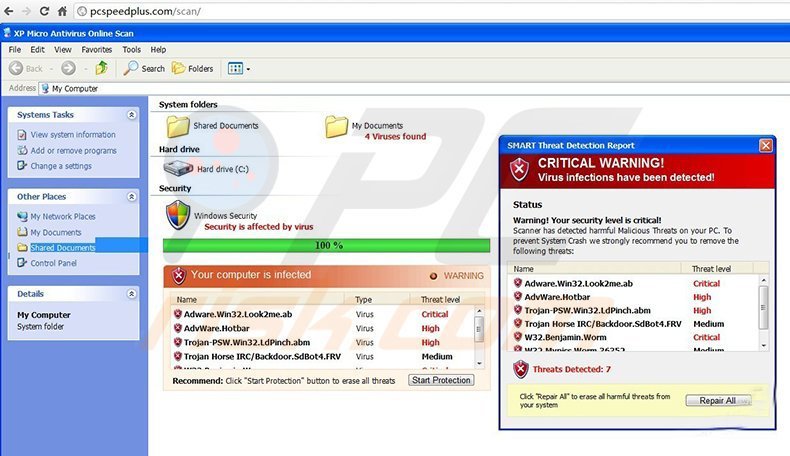 If you observe XP Micro Antivirus scanning your computer for security infections, you have visited a malicious website, which is attempting to trick you into downloading rogue software (at this point, however, your operating system should not be infected). The first step of this scam displays a fake security warning message:

Message from website - "Critical Security Warning!" Your PC was infected with self-replicating virus after Spyware attack. XP Micro Antivirus will perform a free scan of your PC to find all System Threats.

After clicking "OK", Internet users are presented with the screen of the XP Micro Antivirus Online Scan, which displays the "My Computer" screen and imitates a security scan.

After a few seconds, XP Micro Antivirus Online Scan completes an imaginary security scan and presents a fake pop-up with a list of supposedly-detected security infections. 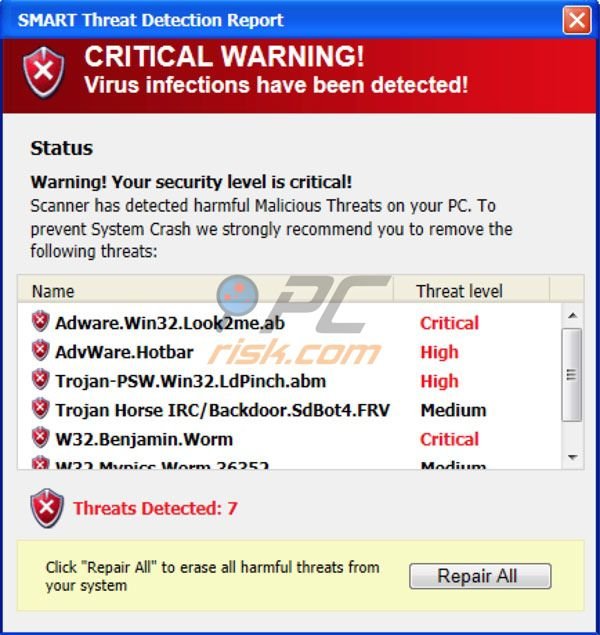 SMART Threat Detection Report.
CRITICAL WARNING! Virus infections have been detected!
Warning! Your security level is critical! Scanner has detected harmful Malicious Threats on your PC. To prevent System Crash we strongly recommend you to remove the following treats: Adware.Win32.look2me.ab; AdvWare.Hotbar; Trojan-PSW.Win32.LdPinch.abm… Click "Repair All" to erase all harmful threats from your system.

If you observe this fake online security warning message, do not click on the "Repair All" button, since this will open a download dialogue window, thus infecting your computer with a rogue antivirus program.

In summary, computer users should be aware that XP Micro Antivirus Online Scan is a scam employed by Cyber criminals in order to proliferate fake antivirus programs. If you have already installed software as suggested by this rogue online scanner, use the recommended anti-spyware program to scan and disinfect your operating system.

To avoid malware-related issues such as these, always use legitimate antivirus and anti-spyware programs to protect your Internet surfing.

Computer users who are dealing with a rogue security software shouldn't buy it's full version. By paying for a license key of a fake antivirus program users would send their money and banking information to cyber criminals. Users who have already entered their credit card number (or other sensitive information) when asked by such bogus software should inform their credit card company that they have been tricked into buying a rogue security software. Screenshot of a web page used to lure computer users into paying for a non-existent full version of xp micro antivirus pop-up and other rogue antivirus programs:

To protect your computer from xp micro antivirus pop-up and other rogue antivirus programs users should:

If you have additional information on xp micro antivirus pop-up or it's removal please share your knowledge in the comments section below.

Scan this QR code to have an easy access removal guide of XP Micro Antivirus Pop-up on your mobile device.
We Recommend: