What is System Defender?

System Defender is a security program that should not be trusted, since it is a scam released by cyber criminals. This fake antivirus software is designed to scare PC users into believing that their computers are infected with malware and viruses.

Furthermore, this rogue software modifies the registry entries of the infected operating system and blocks execution of installed software. The creators of this scam intend to give the impression that the targeted PC is infected with high-risk malware and that System Defender can offer a security software solution to fix these issues.

In fact, none of the 'detected' viruses or malware exist on your computer - this bogus program is designed to make you believe otherwise in an attempt to sell its promoted fake antivirus programs.

At time of testing, System Defender encouraged computer users to purchase “Spyware Defender 2014”, “Antivirus WIN 2014 Ultimate”, and “Antivirus MAC 2014”. Cyber criminals responsible for creating the System Defender scam hope that PC users will fall for the fake security scans performed by their rogue software and then purchase the programs offered.

None of the programs promoted by System Defender are legitimate - computer users who pay for them will lose their money and their computers will remain infected. 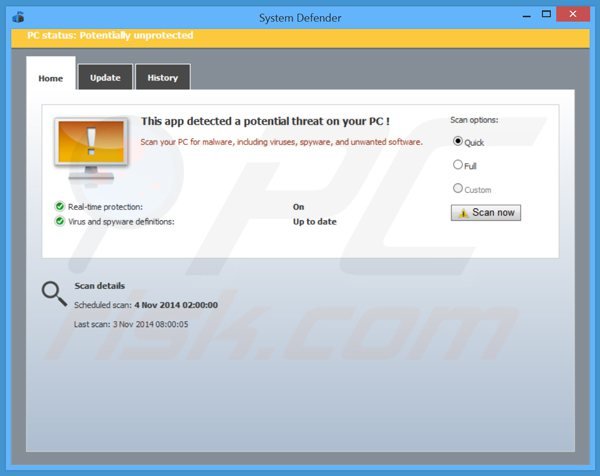 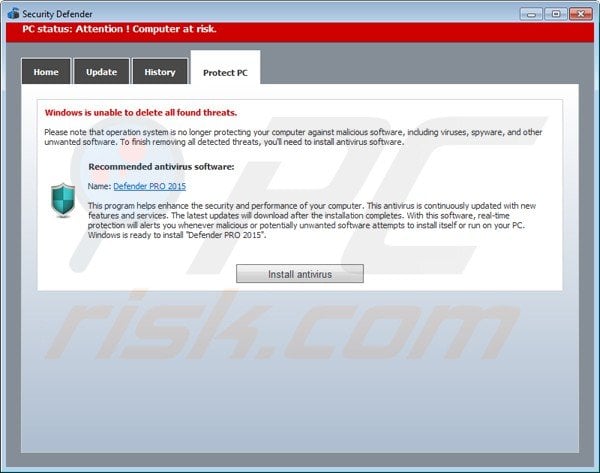 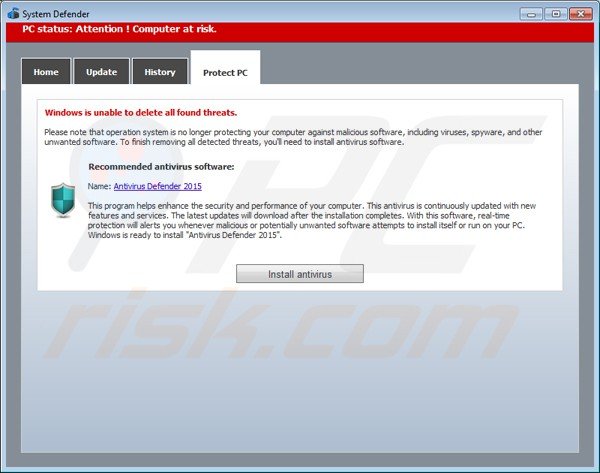 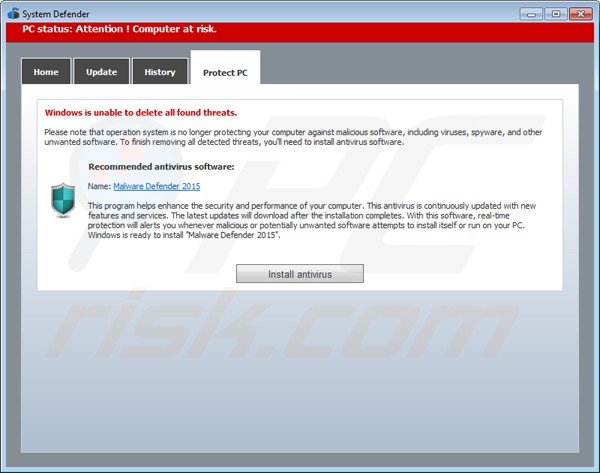 The purpose of System Defender distribution is to convince PC users into believing that their computers are at risk, and then to sell useless license keys. Paying for any program listed by System Defender is equivalent to sending your money to cyber criminals - you will lose your money and divulge your banking information, potentially leading to further thefts from your account.

This fake antivirus program is usually distributed via fake online security scanners. These pop-ups are incorporated into malicious websites. Upon visiting these sites, PC users are presented with a message stating that their computers are infected and that they need to download and install antivirus software to remove the 'detected' infections.

Other deceptive methods of proliferating System Defender include using fake software updates, fake video codecs, Trojans, and drive-by downloads. If you observe this program scanning your PC for security infections, ignore it and eliminate this scam from your PC.

PC status: Potentially unprotected
Potential threat was detected!
View the items that were detected as potentially harmful and the actions that you took on them:
Downloader.JS.Snall.fi
Category: High
Description: This Trojan downloads other files via the Internet and launches them for execution on the victim machine. This program is an HTML page which contains Java Script scenarios. It is 1432 bytes in size. 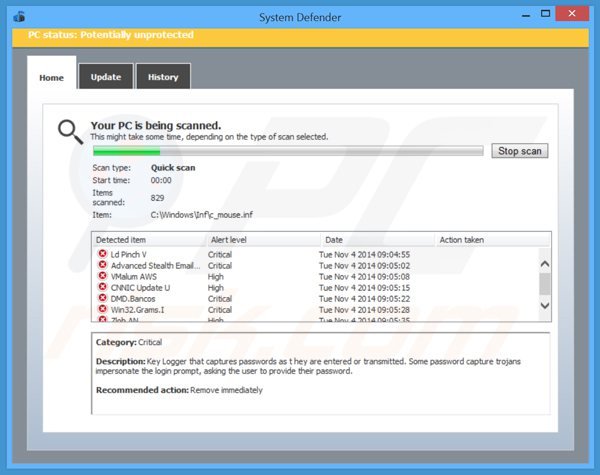 System Defender generating lists of non-existent security infections to scare computer users into believing that their computers are infected with high-risk malware: 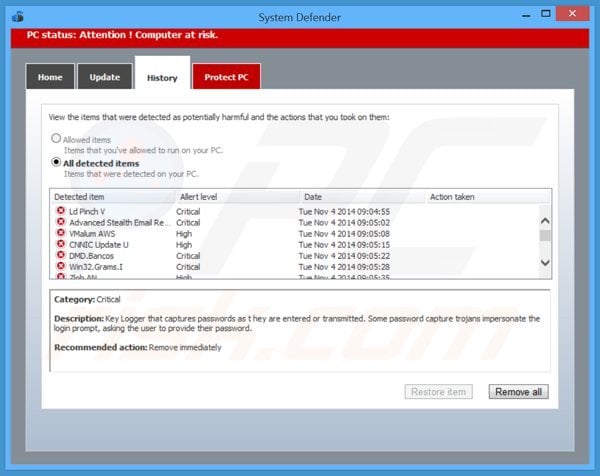 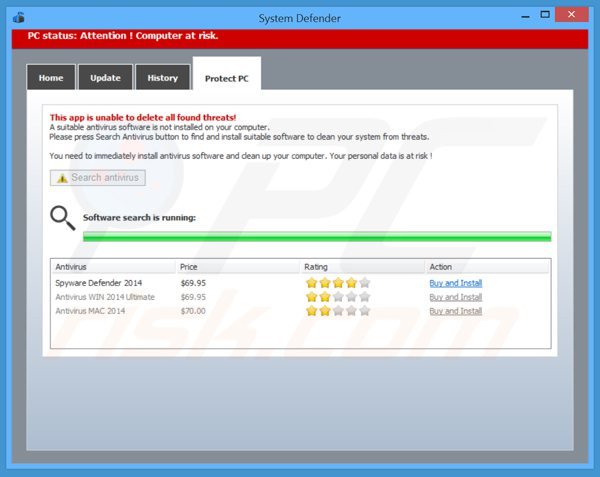 A screenshot of a website used to promote Defender PRO 2015 (a fake antivirus program promoted by Security Defender): 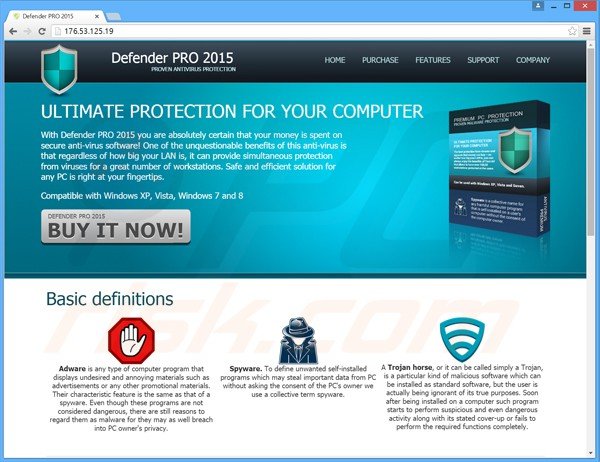 A screenshot of a website (hxxp://spyware-defender.com) used to promote Spyware Defender (a fake antivirus program promoted by System Defender): 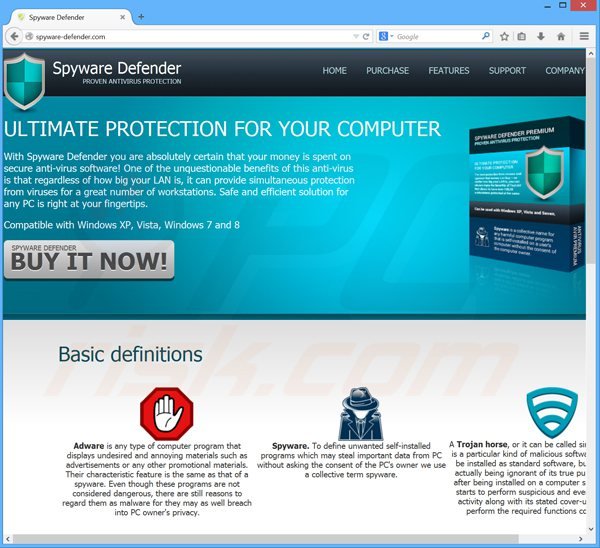 A screenshot of a website (hxxp://avsdefender.com) used to promote Antivirus Defender 2015: 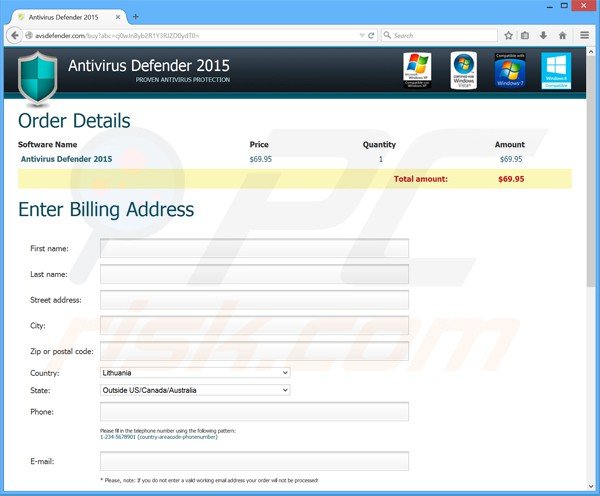 A screenshot of a website used to promote Malware Defender 2015 (non-existent antivirus program): 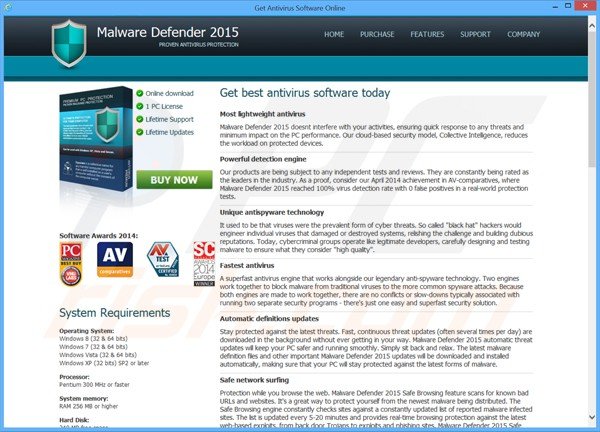 Click the "Troubleshoot" button, then click the "Advanced options" button. In the advanced option screen, click "Startup settings". Click the "Restart" button. Your PC will restart into the Startup Settings screen. Press "5" to boot in Safe Mode with Networking.

If, after or before, removal of this fake antivirus program you are unable to run any of your installed software, System Defender has modified your operating system's .exe file associations. To fix this, download the registry fix (link below). Save it to your computer, double click it, click "Yes", and then "OK". After rebooting your PC, file associations should function normally.

The System Defender rogue blocks execution of all installed software - this makes its removal complicated. The best way to eliminate this rogue is to login to an unaffected user account and run a security scan from it. If available, login to "Guest" account and follow the removal steps provided below. If your "Guest" user account is not activated, follow these steps:

Restart your PC, when the Windows logon screen appears, select "Guest" user, then continue with the removal steps provided below.

Step 2
System Defender modifies the system Hosts file. The Hosts file is used to resolve canonical names of websites to IP addresses. When it is changed, the user may be redirected to malicious sites, despite seeing legitimate URLs in address bar. It is difficult to determine which sites are genuine when the Hosts file is modified.

Computer users who are dealing with a rogue security software shouldn't buy it's full version. By paying for a license key of a fake antivirus program users would send their money and banking information to cyber criminals. Users who have already entered their credit card number (or other sensitive information) when asked by such bogus software should inform their credit card company that they have been tricked into buying a rogue security software. Screenshot of a web page used to lure computer users into paying for a non-existent full version of system defender fake antivirus and other rogue antivirus programs:

To protect your computer from system defender fake antivirus and other rogue antivirus programs users should:

If you have additional information on system defender fake antivirus or it's removal please share your knowledge in the comments section below.

Scan this QR code to have an easy access removal guide of System Defender fake antivirus on your mobile device.
We Recommend: