Combo Cleaner is a tool to detect malware on your computer. You need to purchase full version to get full functionality.

To use this coupon, go to Combo Cleaner checkout page. Coupon will be applied automatically. Or you can manually enter coupon code: PCRISK10 for a 10% discount.

Combo Cleaner is an antivirus and system optimizer created by a company called RCS LT. This application runs on Mac computers and works with all recent Mac operating systems, including Yosemite, El Capitan, and Sierra. This application takes a different approach as compared to traditional antivirus suites. As well as an antivirus function, Combo Cleaner includes a disk cleaner, big files finder, duplicate files finder, privacy scanner, and application uninstaller. This app can be used to clean computers of security threats and free up significant disk space cluttered by redundant files. Although Mac computers are thought to be more secure than Windows systems, a reliable antivirus solution is paramount. 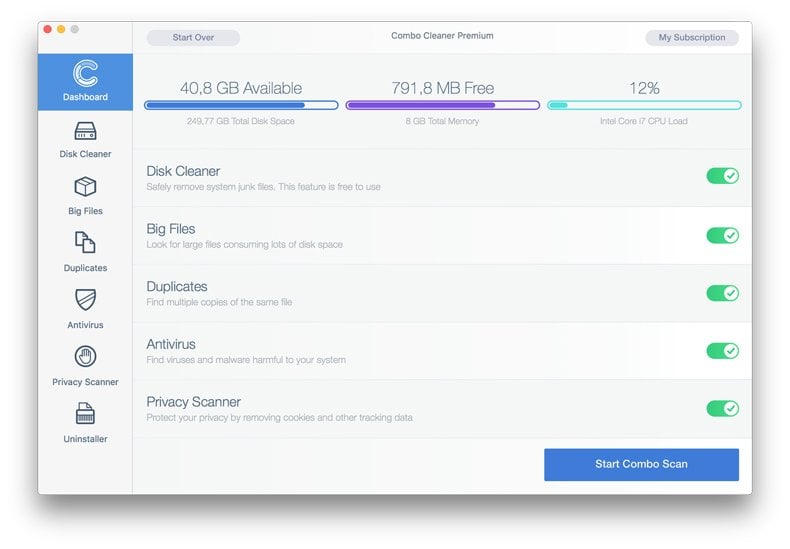 Combo Cleaner can be downloaded free of charge from combocleaner.com website. The free version of this program allows use of the Disk Cleaner feature - scanning the system and allowing removal of Application Caches, Downloads, Application Logs, and Trash. For full access to all other features of this application, users can subscribe to Combo Cleaner’s premium version. The price starts from $7.99 for 1 month. This is very good value as compared to other applications. For example, legitimate antivirus applications often cost, on average, around $60, duplicate file detectors around $10, and so on. To receive all features available in Combo Cleaner (purchasing separate applications for each function via other suppliers), the cost could amount to well over $100, whereas Combo Cleaner costs just $7.99 a month.

This application is available to download on the Mac App Store managed by Apple, so the process is smooth with no complicated steps. 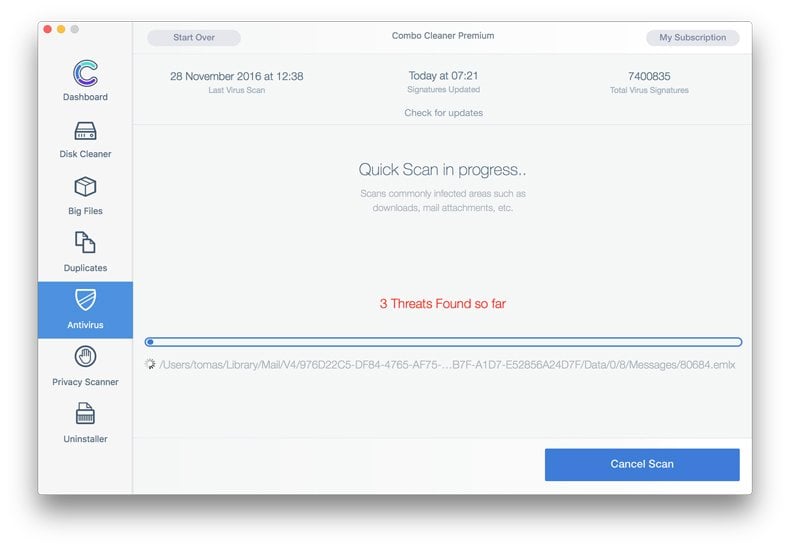 Combo Cleaner is equipped with two virus scan engines. The first checks for Mac-based malware infections and the second scans for PC generic security threats. We tested this antivirus on a virtual machine and it detected all pre-installed adware and malware infections that were causing intrusive pop-up ads in Safari and performing other malicious tasks. We were especially impressed that it also eliminated all infected email attachments. While the infected email attachments were not causing any harm to our Mac-based computer, their elimination ensures that they will not be forwarded to Windows systems where they could execute and cause real damage.

DISK CLEANER - Allows easy removal of Application Caches, Downloads, Application Logs, and Trash. On our test machine, we were able to free up 1,7 gigabytes of useless files using this feature. 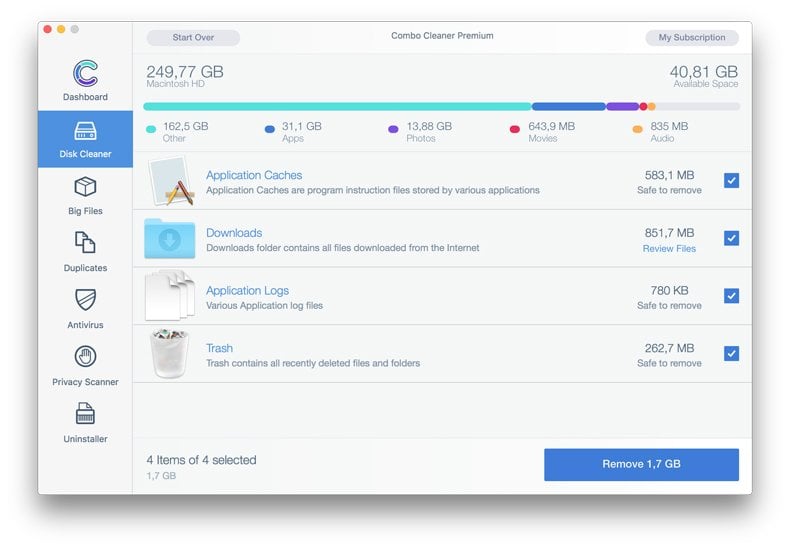 BIG FILES - This feature is designed to find big files on the hard disk drive. Old downloads and other obsolete forgotten files can occupy significant amounts of disk space - this feature lists all such files in an easy-to-understand form. This allows easy inspection and removal. 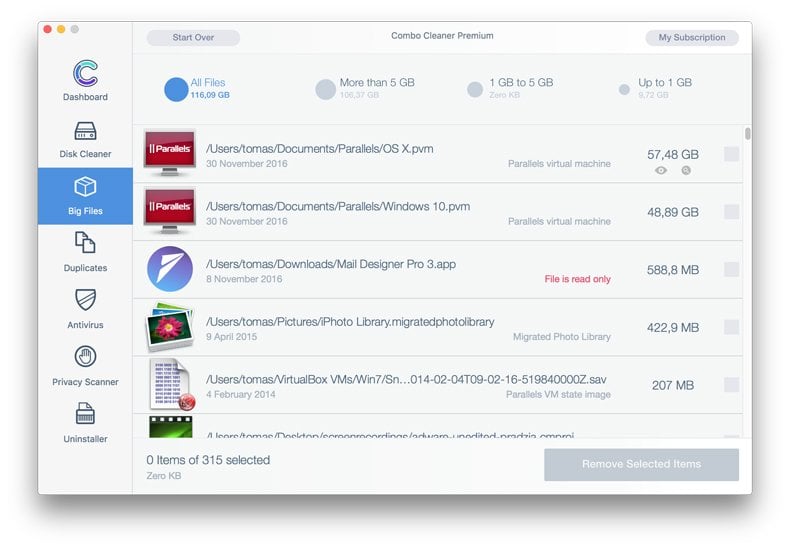 DUPLICATES - This is a duplicate file scanner that scans the hard disk drive and lists all identical files. On our test machine, this feature was capable of detecting duplicate files regardless of file names. Using an 'auto select' button, we were able to easily remove all identical copies of files on our computer. 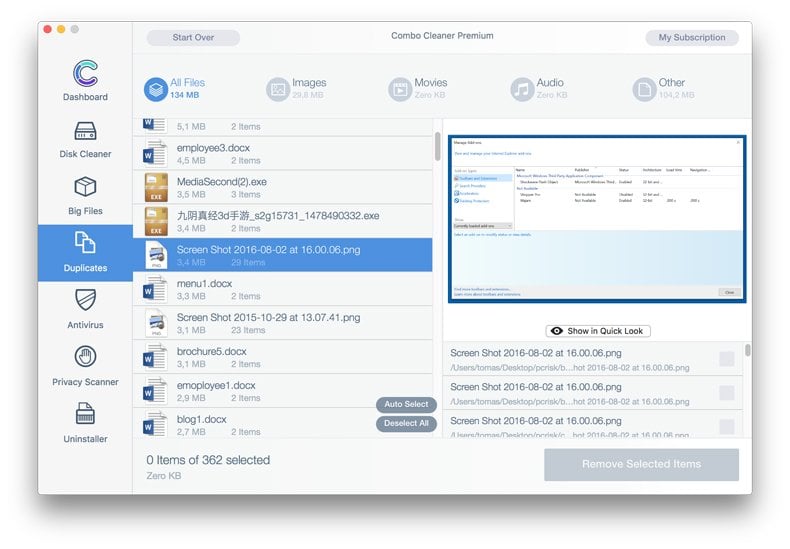 PRIVACY SCANNER - This feature can be used by computer users who are worried about their privacy. Privacy Scanner allows easy identification and removal of cookies, cache files, browsing history, and other data that (in the wrong hands) could compromise users' privacy. During testing, we also noticed that this feature allows users to perform a full reset of their installed Internet browsers - especially useful if browsers become unstable or are hijacked by adware. 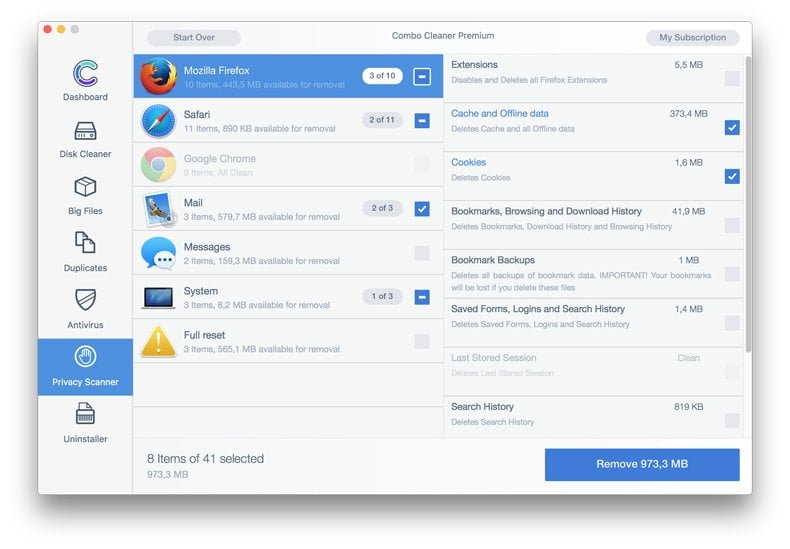 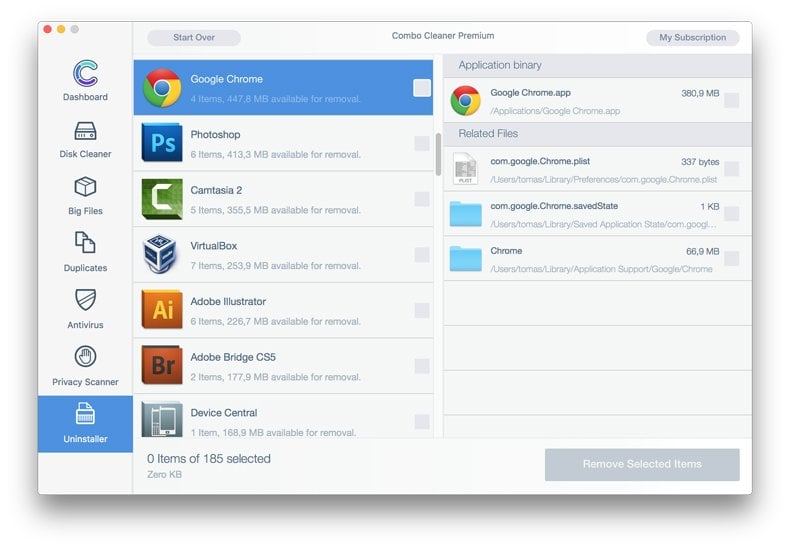