What is I am a professional programmer who specializes in hacking email scam?

As a rule, scammers behind sextortion email scams claim to have hacked a computer and recorded recipients while they were visiting adult websites. Scammers threaten to publish the video/send it to other people, unless recipients pay a certain amount of Bitcoin to the provided wallet address.

Such emails have to be ignored - they are scams and videos (or other compromising material) that cybercriminals behind them claim to have do not exist. 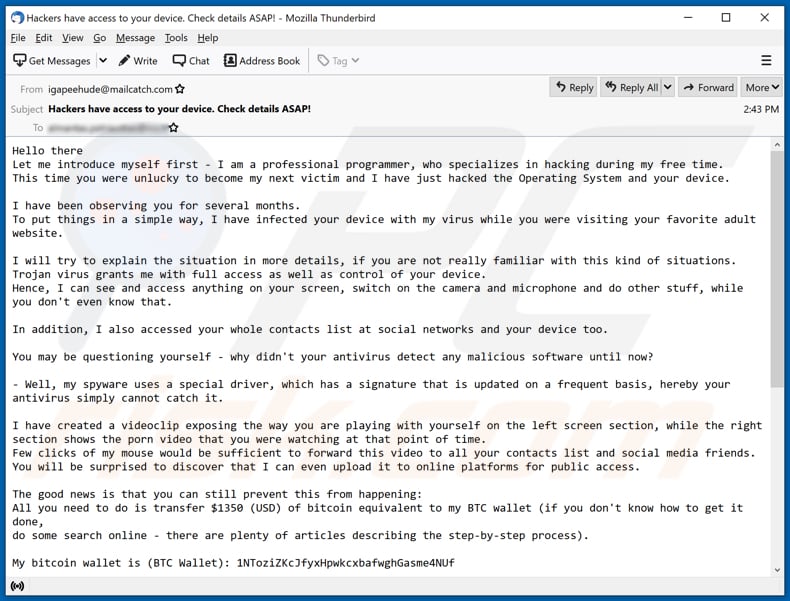 The scammer behind this sextortion email scam introduces himself as a professional programmer who hacks into computers during his free time. He claims that he hacked the recipient's computer several months ago - he installed a virus that gave him full access to the infected computer.

He also claims that he used a connected webcam to record a video of a recipient while he was visiting some adult page (watching an adult video). The scammer threatens to send that video to all people on the recipient's contact list and social media if a recipient is not going to pay $1350 in Bitcoins to the provided BTC wallet within 48 hours after receiving this email.

There are many similar sextortion scams. Most of them are used to scare recipients into paying a certain amount of money to scammers so they would not spread a video or photo that does not exist. It is important to mention that scammers often use a spoofing technique to trick recipients into believing that their email account or a computer is hacked.

Spoofing technique allows scammers to change the email address of a sender. Typically, scammers make the sender's email address the same as the recipient's.

In one way or another, emails like this one can and should be ignored - scammers behind them do not have any compromising videos or photos.

As mentioned in the previous paragraph, there are many similar sextortion scams. A couple of examples are "I have got two not really pleasant news for you", "I have to share bad news with you", "Within 96 hours I'll ruin your prestige".

It is important to mention that email can be used as a channel not only to extract money (or personal information) but also to deliver malware.

A couple of examples of malspam campaigns are "KIO KOREA Email Virus" and "Socar Email Virus". Typically, they are used to distribute trojans, ransomware, and other malicious software.

How do spam campaigns infect computers?

When cybercriminals use email as a channel to deliver malware, they send malicious files or links designed to download such files. In one way or another, their main goal is to trick recipients into opening a file that is designed to install malicious software.

In order to trick users into opening malicious attachment/file, cybercriminals disguise their emails as important letters from legitimate companies or other entities. A couple of examples of files that cybercriminals usually use in their malspam campaigns are Microsoft Office documents, PDF documents, RAR, ZIP or other archive files, JavaScript files, executable files (like .exe).

Emails sent from unknown, suspicious addresses should not be trusted. If such emails are not relevant and contain a link or an attachment, then it is likely that they came from cybercriminals who try to trick recipients into installing malware on their computers.

Also, software (and files) should be downloaded from official, trustworthy pages. It is common that Peer-to-Peer networks like torrent clients, eMule, various unofficial pages, third-party downloaders, and other sources of this kind are used to distribute unwanted, potentially malicious software.

Any installed programs must be updated, activated properly. It has to be done using functions or tools that their official developers provide.

Third-party, unofficial tools should never be used. It is common that they are used to distribute malware. Another reason not to use such tools is that it is not legal to activate licensed software with 'cracking' tools.

The operating system should be scanned for malware or any other threats regularly. It is advisable that it would be scanned with a reputable antivirus or anti-spyware software.

Appearance of the email (GIF):

Text in this email:

Subject: Hackers have access to your device. Check details ASAP!

Hello there
Let me introduce myself first - I am a professional programmer, who specializes in hacking during my free time.
This time you were unlucky to become my next victim and I have just hacked the Operating System and your device.

I have been observing you for several months.
To put things in a simple way, I have infected your device with my virus while you were visiting your favorite adult website.

I will try to explain the situation in more details, if you are not really familiar with this kind of situations.
Trojan virus grants me with full access as well as control of your device.
Hence, I can see and access anything on your screen, switch on the camera and microphone and do other stuff, while you don't even know that.

In addition, I also accessed your whole contacts list at social networks and your device too.

You may be questioning yourself - why didn't your antivirus detect any malicious software until now?

- Well, my spyware uses a special driver, which has a signature that is updated on a frequent basis, hereby your antivirus simply cannot catch it.

The good news is that you can still prevent this from happening:
All you need to do is transfer $1350 (USD) of bitcoin equivalent to my BTC wallet (if you don't know how to get it done,
do some search online - there are plenty of articles describing the step-by-step process).

Once I receive your payment, I will delete your kinky video right away, and can promise that is the last time you hear from.
You have 48 hours (2 days exactly) to complete the payment.
The read notification will be automatically sent to me, once you open this email, so the timer will start automatically from that moment.

Don't bother trying to reply my email, because it won't change anything (the sender's email address has been generated automatically and taken from internet).
Don't try to complain or report me either, because all my personal information and my bitcoin address are encrypted as part of blockchain system.
I have done my homework.

If I discover that you have tried forwarding this email to anyone, I will right away share your kinky video to public.

Let's be reasonable and don't make any stupid mistakes anymore. I have provided a clear step-by-step guide for you.
All you need to do is simply follow the steps and get rid of this uncomfortable situation once and for all.

An Italian variant of "I Am A Professional Programmer Who Specializes In Hacking" spam email:

A Czech variant of "I Am A Professional Programmer Who Specializes In Hacking" scam email:

Such attacks are called phishing. In a phishing attack, cybercriminals usually send an email message with some popular service logo (for example, Microsoft, DHL, Amazon, Netflix), create urgency (wrong shipping address, expired password, etc.), and place a link which they hope their potential victims will click on.

After clicking the link presented in such email message, victims are redirected to a fake website that looks identical or extremely similar to the original one. Victims are then asked to enter their password, credit card details, or some other information that gets stolen by cybercriminals.

In such attacks, cybercriminals' main goal is to trick their potential victims into opening an infected email attachment. To achieve this goal, email messages usually talk about recently received invoices, faxes, or voice messages.

If a potential victim falls for the lure and opens the attachment, their computers get infected, and cybercriminals can collect a lot of sensitive information.

While it's a more complicated method to steal personal information (spam filters and antivirus programs usually detect such attempts), if successful, cybercriminals can get a much wider array of data and can collect information for a long period of time.

To get rid of the video, victims are asked to pay a ransom (usually using Bitcoin or another cryptocurrency). Nevertheless, all of these claims are false - users who receive such emails should ignore and delete them.

How to spot a malicious email?

While cyber criminals try to make their lure emails look trustworthy, here are some things that you should look for when trying to spot a phishing email:

To minimise the risk of opening phishing and malicious emails we recommend using Combo Cleaner Antivirus for Windows.

Example of a spam email: 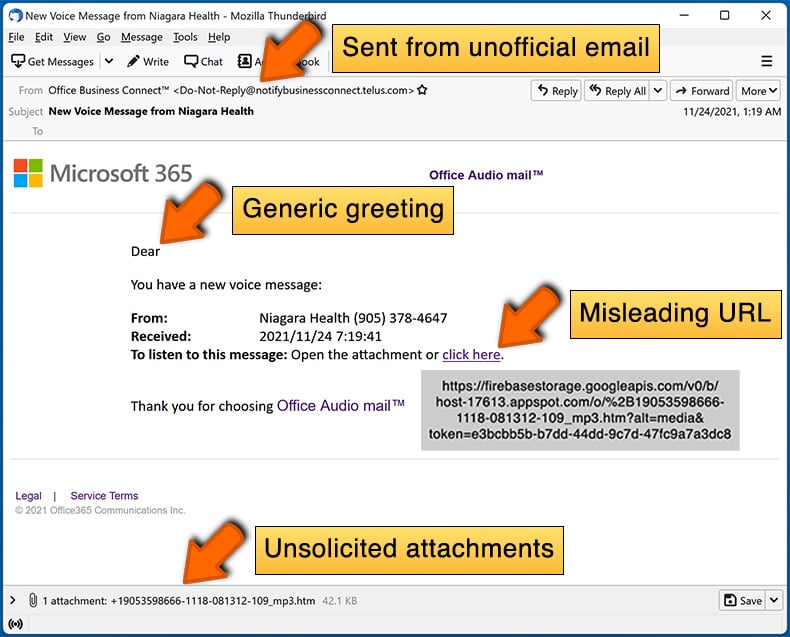 What to do if you fell for an email scam?

Scan this QR code to have an easy access removal guide of I Am A Professional Programmer Who Specializes In Hacking spam on your mobile device.
We Recommend: