What is Antivirus Action?

When Antivirus Action infects your computer it will perform fake virus scans and display fake security warnings. This rogue program runs automatically whenever you boot your operating system.

After running a scan, it will report the discovery of many infections and that you need to purchase the software in order to delete the threats. Do not purchase this program, it is a scam. Internet criminals hope that you will fall for their devious scheme designed to encourage you to purchase a license for Antivirus Action.

Do not consider doing so; you will loose your money and your PC will remain infected with this rogue program. The following security warnings may appear on your screen (these messages are generated by this rogue program and are fake - Antivirus Action generates them to scare you into believing that your PC is highly infected): 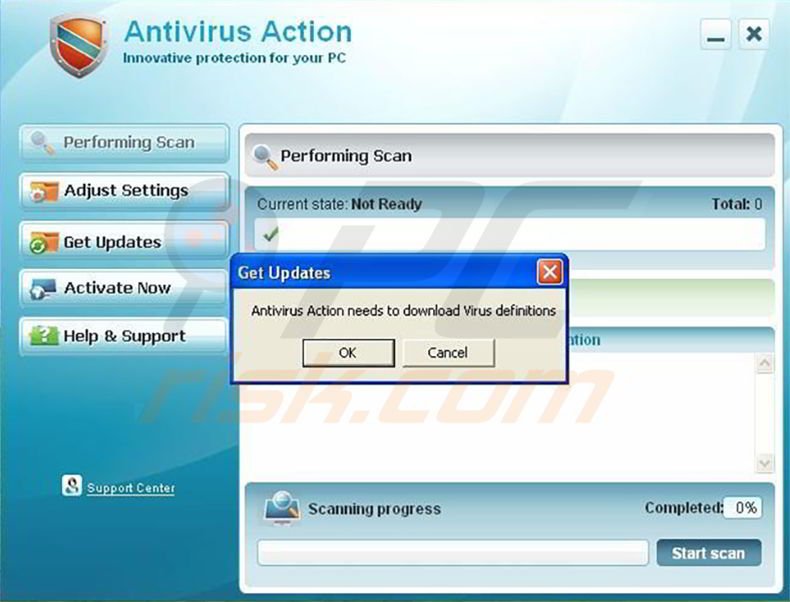 All of these security warnings are false. This is simply the method by which Antivirus Action attempts to fool users into purchasing the license.

If you have already purchased Antivirus Action, you should immediately contact your credit card company and cancel the transaction, explaining that you have been fooled into purchasing fake antivirus software.

Commonly, Antivirus Action is propagated via Trojans. If you have recently downloaded some relatively unknown video codecs, this could be the method by which this fake antivirus software infiltrated your system.

After Antivirus Action has infected your computer, it disables other legitimate security programs and this could lead to other attacks and infections. You should remove Antivirus Action immediately when detected on your system.

NOTE: Some spyware can block the downloading of spyware removers. If You cannot download the above remover using the default location, try one of the alternative download locations below:

2. Open Internet Explorer, click Tools, and select Internet Options. Select Connections, then click LAN settings, if 'Use a proxy server for your LAN' is checked, uncheck it and press OK.

3. Download HijackThis and save it to your desktop. Some malicious programs are able to block HijackThis, so when you click the download link, in the Save dialog, rename HijackThis.exe to iexplore.exe and only then click the Save button. After saving the file to your desktop, double click it. In the main HijackThis window click the “Do a system scan only” button. Select the following entry (place a tick at the left of the entry):

4. Download Hitman Pro (30 day trial) and run a scan, and then download and install a legitimate spyware remover (you can use the download button below) to completely remove the infection.

NOTE: Some spyware can block the downloading of spyware removers. If You cannot download the above remover using the default location, try one of the alternative download locations below:

If you are unable to remove Antivirus Action, you can use these manual removal instructions. Use them at your own risk, since if you do not have strong computer knowledge, you could harm your operating system. Use them only if you are an experienced computer user. (Instructions on how to end processes, remove registry entries...)

Computer users who are dealing with a rogue security software shouldn't buy it's full version. By paying for a license key of a fake antivirus program users would send their money and banking information to cyber criminals. Users who have already entered their credit card number (or other sensitive information) when asked by such bogus software should inform their credit card company that they have been tricked into buying a rogue security software. Screenshot of a web page used to lure computer users into paying for a non-existent full version of antivirus action rogue and other rogue antivirus programs:

To protect your computer from antivirus action rogue and other rogue antivirus programs users should:

If you have additional information on antivirus action rogue or it's removal please share your knowledge in the comments section below.

Scan this QR code to have an easy access removal guide of Antivirus Action Rogue on your mobile device.
We Recommend: