Do not confuse this bogus version with legitimate AVG Antivirus 2011 software. The creators of this rogue program use the AVG name and design an interface similar to the real program in order to fool people into buying a fake license.

Furthermore, this software will report that your computer is infected with various viruses. It displays fake warning messages and configures itself to start automatically on system start-up.

This software also hijacks popular browsers such as Explorer, Chrome, Mozilla, and Firefox. The sole purpose of this program is to empty your bank account. 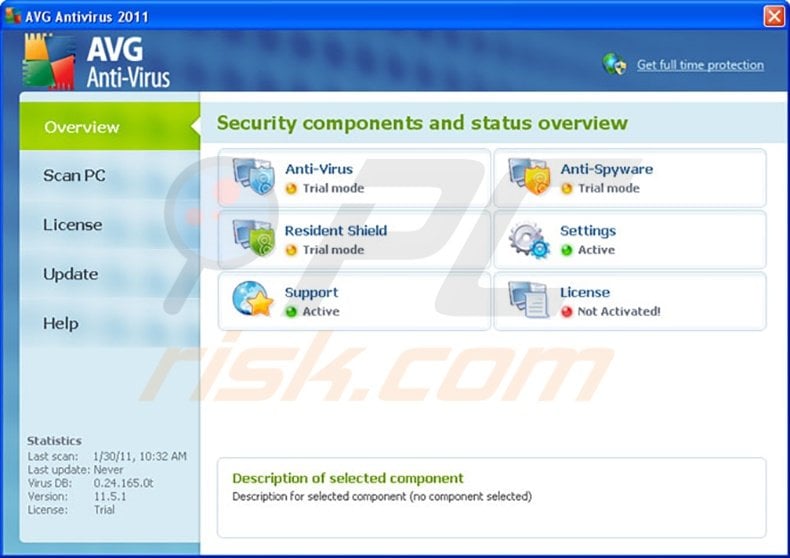 Do not purchase this program, it is a scam. If you have already done so, contact your credit card company and explain that you have been tricked into purchasing a fake antivirus program. The following security warnings will be displayed on your computer when it is infected with Fake AVG antivirus 2011:

“Warning! Once installed on your machine, NetPumper may start monitoring your web browsing habits, such as the pages you load and search terms you type in the search page. NetPumper may also deliver excessive pop-up advertisements even when you are not browsing the Internet. NetPumper is also able to reduce your computer performance by using your hard drive resources in order to deliver advertisements onto your computer screen.”
“Warning! Identity theft attempt detected! Attacker IP: Attack Target: Microsoft Corp. Keys Description: Remote host tried to get access to your personal information.”
“Warning! Active Virus Detected! Threat Detected: Email-Worm.Zhelatin Infected file: Action taken: Application Blocked Description: Worm Email-Worm.Zhelatin.vy is virus-like malware with destructive code, and is able to mutate, replacing its own code. This makes Email-Worm.Zhelatin.vy very dangerous, hard to find, and difficult to delete. Like most viruses, worm Email-Worm-Zhelatin.vy may spread to other computers by secretly emailing themselves to Internet users in your address book.”

If you see these security warnings on your computer screen, it indicates that your PC is infected with a clone of AVG antivirus 2011. Internet criminals who are responsible for creating these rogue programs are always looking for new ways of tricking computer users.

This fake antivirus program is particularly malicious since it uses the name, AVG, a legitimate antivirus software vendor. AVG is known by millions of people, and consequently, Internet criminals are exploiting their name with this misleading application.

The legitimate AVG antivirus program does not show fake the security warning messages listed here, nor does it coerce computer users into buying a license. The clone software, however, is very persistent in its goal of selling a useless license key.

Closely study the screenshot of this program and the fake warning messages that it generates, and if you feel that your computer is infected with a fake version of AVG Antivirus 2011, use the information provided to help remove this bogus program.

3. Download HijackThis and save it to your desktop. Some malicious programs are able to block HijackThis, so when you click the download link, in the Save dialog, rename HijackThis.exe to iexplore.exe and only then click the Save button.

4. After this procedure, you should be able to access your desktop. You should now download legitimate anti-spyware software to fully remove Fake AVG antivirus 2011 from your computer.

5. After downloading anti-spyware software, install it, update it, and then run a full system scan. Remove all infections found.

If you are unable to remove Fake AVG antivirus 2011, you can use these manual removal instructions. Use them at your own risk, since if you do not have strong computer knowledge, you could harm your operating system.

Computer users who are dealing with a rogue security software shouldn't buy it's full version. By paying for a license key of a fake antivirus program users would send their money and banking information to cyber criminals. Users who have already entered their credit card number (or other sensitive information) when asked by such bogus software should inform their credit card company that they have been tricked into buying a rogue security software. Screenshot of a web page used to lure computer users into paying for a non-existent full version of avg antivirus 2011 rogue and other rogue antivirus programs:

To protect your computer from avg antivirus 2011 rogue and other rogue antivirus programs users should:

If you have additional information on avg antivirus 2011 rogue or it's removal please share your knowledge in the comments section below.

Scan this QR code to have an easy access removal guide of AVG Antivirus 2011 Rogue on your mobile device.
We Recommend: