What is Antimalware Go?

This fake program is from the same family as AntiVira Av, Antivirus .NET, Antivirus Scan, and Antivirus Action. These are fake computer scanners so be sure to remove them from your computer.

The creators of these bogus programs make the functionality similar and simply change the appearance of each. Antimalware Go is fake and when it infects your system, it will block legitimate programs from running.

It will also block your desktop and perform fake computer security scans. Antimalware Go is useless and only designed to steal money from you. 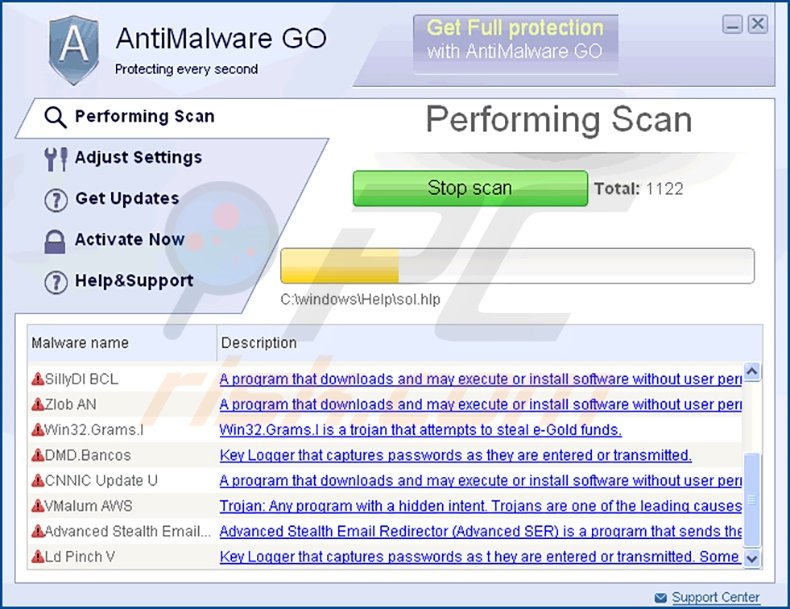 These supposed threats do not actually exist. While the interface of this program is professional and appears as legitimate antivirus software, Antimalware Go is in fact a rogue program created by Internet criminals who are extorting money by the sale of a useless full version.

Do not buy this program. You will lose your money and your PC will remain infected with Antimalware Go.

This dangerous program is also capable of hijacking your Internet browser to further persuade to purchase the program. This rogue program is installed on your computer using Trojans and other devious methods.

Internet criminals are known to use spam campaigns and search engine result poisoning techniques to propagate their bogus programs. Your computer might be infected with Antimalware Go having inadvertently visiting misleading websites or using P2P networks for downloading files.

There are countless ways by which Internet criminals distribute fake antivirus programs such as Antimalware Go. You should only use a legitimate security program to protect your PC, and if you have noticed this bogus program on your desktop, you should not hesitate to remove this malicious software.

Use the information provided to help you in achieving this goal.

The following fake security warning messages will be shown on a computer infected with Antimalware Go:

“Antivirus software alert. Infiltration alert. Your computer is being attacked by an Internet virus. It could be password-stealing attack, Trojan Dropper, or similar.”
“Internet Explorer. Warning - visiting this web site may harm your computer! Most likely causes: The website contains exploits that can launch malicious code on your computer. Suspicious network activity detected. There might be active spyware running on your computer.”

Ignore these messages. Antimalware Go is useless. Remove it from your computer using this removal guide:

If you are unable to remove Antimalware Go, you can use these manual removal instructions. Use them at your own risk, since if you do not have strong computer knowledge, you could harm your operating system.

Computer users who are dealing with a rogue security software shouldn't buy it's full version. By paying for a license key of a fake antivirus program users would send their money and banking information to cyber criminals. Users who have already entered their credit card number (or other sensitive information) when asked by such bogus software should inform their credit card company that they have been tricked into buying a rogue security software. Screenshot of a web page used to lure computer users into paying for a non-existent full version of antimalwarego rogue and other rogue antivirus programs:

To protect your computer from antimalwarego rogue and other rogue antivirus programs users should:

If you have additional information on antimalwarego rogue or it's removal please share your knowledge in the comments section below.

Scan this QR code to have an easy access removal guide of AntimalwareGo Rogue on your mobile device.
We Recommend: