CleanThis is a fake computer security scanner created by Internet criminals with the intention of tricking computer users into purchasing a license for their rogue program. This bogus software is part of a fake Microsoft Security Essentials infection.

This rogue program is distributed through Trojans, and when it infects your system, it displays a fake MSE message stating that your computer is infected with an unknown Trojan and that you need to run a scan. A fake computer security scan will then begin. 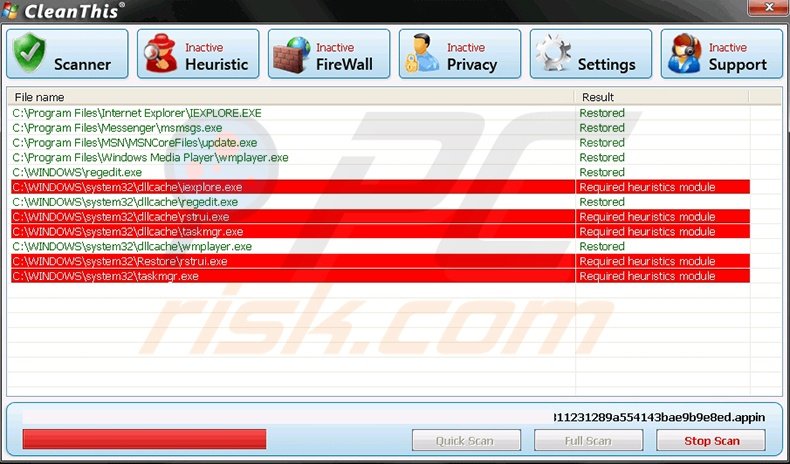 Following the fake scan, you will be asked to download and install CleanThis to remove the computer infection. On restarting your computer, this bogus program takes over your desktop and performs various fake scans and displays fake security messages.

These actions are taken with the purpose of stealing money from your credit card.

Do not enter your banking information into this program - you will lose your money and your PC will remain infected. If you have already bought this fake scanner, you should contact your credit card company to explain that you have been tricked into purchasing a fake computer program.

On installation, CleanThis will imitate a security scan and report that it has detected multiple security issues on your system. You should not attempt to remove the indicated files manually, since these files are harmless.

You should not trust CleanThis - it is a malicious program and only an imitation of legitimate security software. Use the removal guide provided to help remove it from your PC.

The following fake security messages will be displayed:

"The application taskmgr.exe was launched successfully but was forced to shut down due to security reasons."

"This happened because the application was infected by a malicious program which might post a threat for the OS."

"It is highly recommended to install the necessary heuristic module and perform a full scan of your computer to exterminate malicious programs from it."

1. Use a clean computer: Download and save "fixregistrymse.reg" file to a portable USB device, CD, DVD... 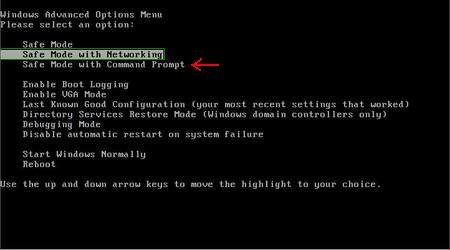 4. You should now fix your registry using the fixregistymse.reg that you saved before. Copy this file to your infected PC and double click it.

After this procedure, restart your computer.

If you are unable to remove CleanThis, you can use these manual removal instructions. Use them at your own risk, since if you do not have strong computer knowledge, you could harm your operating system.

Computer users who are dealing with a rogue security software shouldn't buy it's full version. By paying for a license key of a fake antivirus program users would send their money and banking information to cyber criminals. Users who have already entered their credit card number (or other sensitive information) when asked by such bogus software should inform their credit card company that they have been tricked into buying a rogue security software. Screenshot of a web page used to lure computer users into paying for a non-existent full version of cleanthis rogue and other rogue antivirus programs:

To protect your computer from cleanthis rogue and other rogue antivirus programs users should:

If you have additional information on cleanthis rogue or it's removal please share your knowledge in the comments section below.

Scan this QR code to have an easy access removal guide of CleanThis Rogue on your mobile device.
We Recommend: