When your system is infiltrated by Antivirus Clean 2011, a pop-up will appear on your screen when you visit any website. This pop-up will imply that it is performing a computer security scan and will report multiple infections on your computer.

In order to clean these infections, you will be asked to download and install the full version of Antivirus Clean 2011. When this program is installed on your computer, it will be invoked on every system start-up. 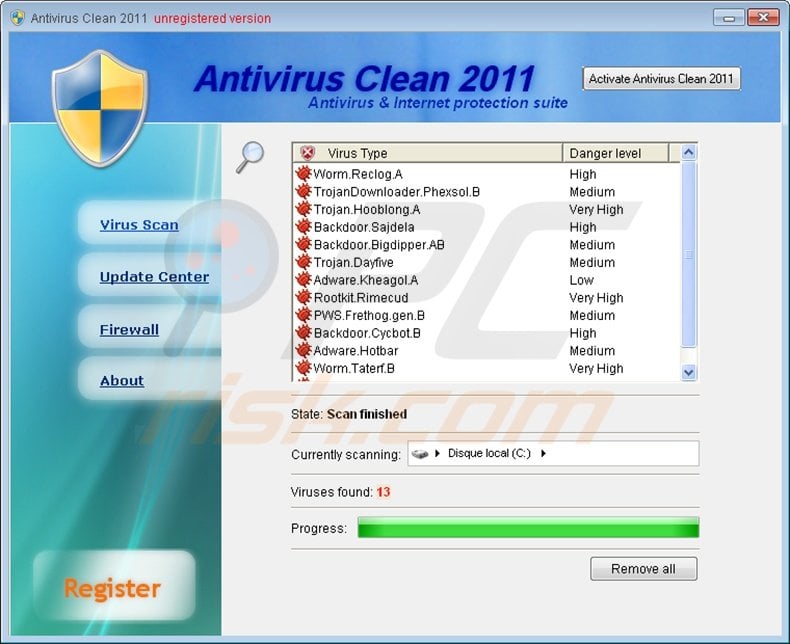 This program is a scam. The security scans and the results are completely fake; you should ignore all messages and remove this bogus program from your computer.

This rogue program is scare-ware created with the sole purpose of stealing money from your credit card. If you have already bought this program, you should contact your credit card company and dispute the charges.

This program has been created by Internet criminals in the hope that computer users will purchase license keys for Antivirus Clean 2011 in order to remove 'detected' security infections. You should be very careful when purchasing a security program for your computer - the Internet is full of fake ones, many of which detect non existent security threats and ask you to purchase a full version in order to remove them.

Always research security programs thoroughly before you purchase, in order to obtain legitimate software. If you notice Antivirus Clean 2011 on your computer, you should eliminate it from your PC immediately.

The following fake security messages will be displayed by Antivirus Clean 2011:

"Your computer is in Danger! Antivirus Clean 2011 has detected some serious threats to your computer! These viruses need to be eliminated immediately! Please click this icon to remove threats."

"Your system is infected! Your computer is compromised by hackers, adware, malware and worms! Antivirus Clean 2011 can remove this infection. Please click this icon to remove threats."

Try entering this retrieved Antivirus Clean 2011 license key: 8425-3952-7321-4410 (you should enter this code within an activation window). If it works, this bogus program will be disabled and you will be able to remove it without further interventions.

If you are unable to remove Antivirus Clean 2011, you can use these manual removal instructions. Use them at your own risk, since if you do not have strong computer knowledge, you could harm your operating system.

Computer users who are dealing with a rogue security software shouldn't buy it's full version. By paying for a license key of a fake antivirus program users would send their money and banking information to cyber criminals. Users who have already entered their credit card number (or other sensitive information) when asked by such bogus software should inform their credit card company that they have been tricked into buying a rogue security software. Screenshot of a web page used to lure computer users into paying for a non-existent full version of antivirus clean 2011 rogue and other rogue antivirus programs:

To protect your computer from antivirus clean 2011 rogue and other rogue antivirus programs users should:

If you have additional information on antivirus clean 2011 rogue or it's removal please share your knowledge in the comments section below.

Scan this QR code to have an easy access removal guide of Antivirus Clean 2011 Rogue on your mobile device.
We Recommend: