What is Fake Bitdefender 2011 Antivirus?

Fake Bitdefender Antivirus 2011 is a scam released by Internet criminals to trick computer users into purchasing their fake computer security program. They name their rogue program after a legitimate program, and in doing so, try to fool people into buying a full version.

These fake programs are often distributed through fake advertisements. When the user enters a website, a pop-up ad appears reporting that it is scanning your computer.

After this 'scan', the ad states that your PC is in danger and that you need to install Bitdefender Antivirus 2011 in order to remove the threats. 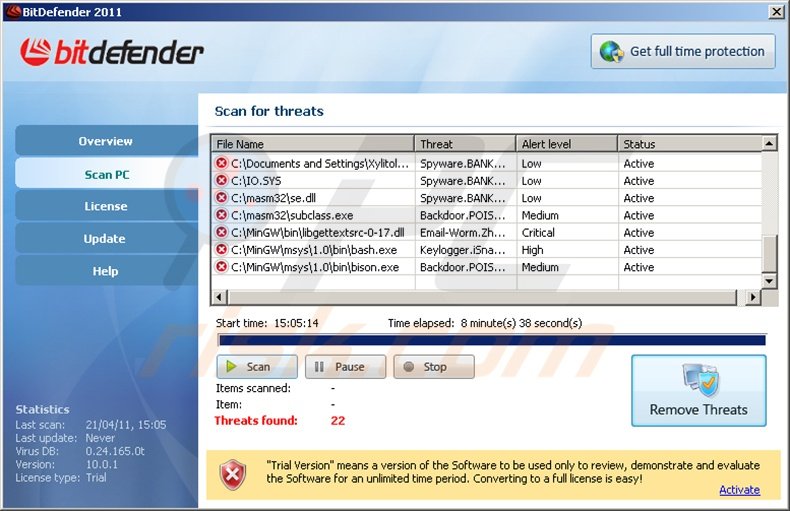 Fake Bitdefender Antivirus 2011 takes command of your computer, starting on each system start-up, and imitating a real security scan. After the 'scan', you are presented with a large list of supposed infections, and in order to remove them, the program encourages you to purchase a license to do so.

This fake antivirus program also displays security messages to further scare you into purchasing a non existent license. If you observe the security warning messages listed below and your downloaded antivirus program appears as the screenshot provided, then your computer is infected with Fake Bitdefender Antivirus 2011.

You should remove this fake program from your computer immediately, as its sole purpose is to steal money from your credit card. If by mistake you have already purchased this fake antivirus program, contact your credit card company and explain that you have been tricked into purchasing a fake license for a bogus computer security program.

You should show extreme caution when choosing a security program for your computer, as the Internet is full of fakes. The real version of this program does not perform fake security scans or flood your desktop with false security warning messages.

Closely study the screenshot of this program, and if you feel that it looks similar, it is likely that your computer is infected with Fake Bitdefender Antivirus 2011. Use this removal guide to help you eliminate this rogue clone.

The following fake security warning messages will be displayed by Fake Bitdefender Antivirus 2011:

"Warning! Virtumonde is an adware program that monitors your Internet browsing habits and may display targeted advertisements on your computer screen. Virtumonde may also create a malicious DLL file in order to log your keystrokes and send the recorded information to a third party website. Virtumonde is an unwanted application and recommended to be removed."#

"Warning! Active Virus Detected! Threat Detected: Backdoor.Poison.BQA Infected file: Action taken: Application Blocked. Description: This backdoor arrives as attachment to email messages spammed by another malware or malicious user. This is a backdoor component of the Darkmoon RAT (Remote Administration Tool). Via this backdoor, hackers attempt to control your PC."

"You may use Internet Explorer in Emergency mode - internal service browser of Microsoft Windows system with limited usability."

Try entering a retrieved Fake Bitdefender antivirus 2011 license key:  BKI14-HJP10-IKO78-OBK894-XYL77 (you should enter this code in an activation window). If it works, this fake antivirus program will be disabled and you will be able to remove it without further interventions.

4.  Download HijackThis and save it to your desktop. Some malicious programs are able to block HijackThis, so when you click the download link, in the Save dialog, rename HijackThis.exe to iexplore.exe and only then click the Save button.

5. Download and install anti-spyware software to completely remove the infection.

If you are unable to remove Fake Bitdefender Antivirus 2011, you can use these manual removal instructions. Use them at your own risk, since if you do not have strong computer knowledge, you could harm your operating system.

Computer users who are dealing with a rogue security software shouldn't buy it's full version. By paying for a license key of a fake antivirus program users would send their money and banking information to cyber criminals. Users who have already entered their credit card number (or other sensitive information) when asked by such bogus software should inform their credit card company that they have been tricked into buying a rogue security software. Screenshot of a web page used to lure computer users into paying for a non-existent full version of rogue bitdefender antivirus and other rogue antivirus programs:

To protect your computer from rogue bitdefender antivirus and other rogue antivirus programs users should:

If you have additional information on rogue bitdefender antivirus or it's removal please share your knowledge in the comments section below.

Scan this QR code to have an easy access removal guide of Rogue Bitdefender Antivirus on your mobile device.
We Recommend: