How to remove "Total Protect" virus?

What is Total Protect?

Total Protect is a bogus computer scanner that attempts to convince you that your computer is infected with various malware and spyware in order to steal money from your credit card account. Total Protect does not actually scan your system for infections, this process is merely imitated. After performing the fake computer scan, this rogue program displays a results page whereby legitimate Windows programs are indicated as spyware. 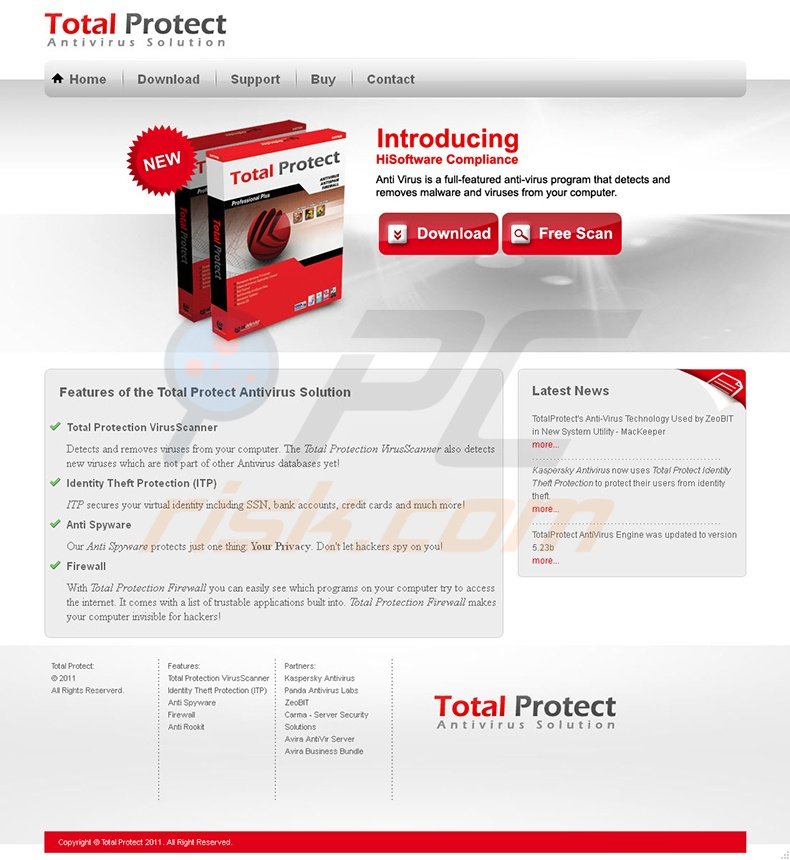 You should not trust Total Protect, it is a scam. Do not attempt to remove the indicated files manually, since this could lead to you being unable to boot your operating system. Total Protect is propagated through Trojans and your PC can be infected with Total Protect when using P2P networks, or if you are tricked into downloading this bogus program by fake online virus scanners. When Total Protect self-installs on your computer, it will continually remind you that your computer is unprotected and that you must activate the program in order to remove the 'detected' infections. You should not buy this program - remove Total Protect from your computer as soon as possible. Total Protect is a typical fake security scanner, mimicking the detection of malware on users' computers, and then coercing them to activate a full version in order to eliminate the threat. This program is rogue and should not be trusted. The statements made by Total Protect are false, whose only purpose is to trick you into believing that your PC is at risk.

The following fake security warning pop-ups will be displayed by Total Protect:

Here is a video showing how to start Windows in "Safe Mode with Networking":

If you are unable to remove Total Protect, you can use these manual removal instructions. Use them at your own risk, since if you do not have strong computer knowledge, you could harm your operating system. Use them only if you are an experienced computer user. (Instructions on how to end processes, remove registry entries...)

Computer users who are dealing with a rogue security software shouldn't buy it's full version. By paying for a license key of a fake antivirus program users would send their money and banking information to cyber criminals. Users who have already entered their credit card number (or other sensitive information) when asked by such bogus software should inform their credit card company that they have been tricked into buying a rogue security software. Screenshot of a web page used to lure computer users into paying for a non-existent full version of total protect rogue and other rogue antivirus programs:

To protect your computer from total protect rogue and other rogue antivirus programs users should:

If you are experiencing problems while trying to remove total protect rogue from your computer, please ask for assistance in our malware removal forum.

If you have additional information on total protect rogue or it's removal please share your knowledge in the comments section below.

A QR code (Quick Response Code) is a machine-readable code which stores URLs and other information. This code can be read using a camera on a smartphone or a tablet. Scan this QR code to have an easy access removal guide of Total Protect Rogue on your mobile device.
We Recommend: