Cloud AV 2012 is a fake computer security scanner that attempts to scare users into buying a fake license in order to remove non existent security threats 'detected' on your computer. This bogus computer scanner is derived from the same family of misleading security programs as AV Protection 2011, AV Security 2012, and many others. This fake security scanner is proliferated using Trojans and other rogue methods. Internet criminals create bogus websites and exploit security vulnerabilities in users' computers to distribute fake programs such as Cloud AV 2012. When your computer is infected with this fake program, your desktop will be flooded with fake security warnings and you will forced to observe a fake security scan each time you boot your operating system. 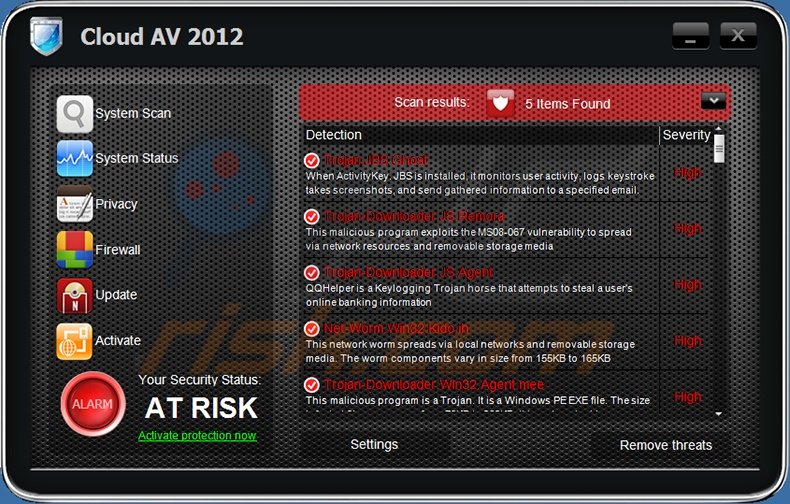 If you click the 'Remove Threats' button after the fake scan, you are asked to purchase a full version of Cloud AV 2012 in order to remove the 'detected' security issues. Do not buy Cloud AV 2012 - it is a scam created to steal money from your credit card account. Like its previous versions, this program is useless. Do not be impressed by its professional appearance. Cyber criminals designed Cloud AV 2012 with one purpose - to scare you into purchasing a fake computer scanner. If you have already bought Cloud AV 2012, you should contact your credit card company and dispute the charges, explaining that you have been tricked into purchasing a fake computer security program. Use this removal guide to completely remove Cloud AV 2012 from your computer.

These messages are fake. If you notice that your computer is infected with Cloud AV 2012, you should remove it immediately.

Step 1
Enter any one of these Cloud AV 2012 activation keys in the registration window. Click the 'Enter Activation key' button located at the bottom-left corner of the main program window and paste only one of these keys (each key is in separate line):

When the registration key is entered, Cloud AV 2012 will behave as if you have purchased it and will stop generating fake warnings. It will also enable some previously disabled Windows features. Note that registering this program will not remove it from your PC. It will simply disable the fake warnings.

Step 3
This infection is known to modify your proxy settings. It intercepts your connection to the Internet and you may be unable to access some Internet resources. To fix this, download and run the proxy removal tool. This tool runs automatically with no messages or windows - just run it on the infected computer and proceed to the next step. The download link is below:

Cloud AV 2012 also modifies the system Hosts file used to resolve canonical names of websites to IP addresses. When it is changed, the user may be redirected to malicious sites, despite observing legitimate URLs in address bar. It is difficult to determine sites are genuine when the Hosts file is modified. To fix this, please download the Microsoft FixIt tool, which restores your Hosts file to the Windows default. Run this tool when downloaded and follow the on-screen instructions. The download link is below:

Step 4
Download, install and run the spyware removal tool. It will scan your computer for Cloud AV 2012 and other malware infections.

If you cannot run the spyware remover, try running the registry fix (link below). It enables execution of programs. Download the registryfix.reg file, double click it, click YES, and then OK.

Computer users who are dealing with a rogue security software shouldn't buy it's full version. By paying for a license key of a fake antivirus program users would send their money and banking information to cyber criminals. Users who have already entered their credit card number (or other sensitive information) when asked by such bogus software should inform their credit card company that they have been tricked into buying a rogue security software. Screenshot of a web page used to lure computer users into paying for a non-existent full version of cloud antivirus 2012 and other rogue antivirus programs:

To protect your computer from cloud antivirus 2012 and other rogue antivirus programs users should:

If you are experiencing problems while trying to remove cloud antivirus 2012 from your computer, please ask for assistance in our malware removal forum.

If you have additional information on cloud antivirus 2012 or it's removal please share your knowledge in the comments section below.

This malware infected my elderly friend's office PC and was tough to clean off. I did all I could manually, including going into safe mode and deleting all the instances of Cloud AV that I could find; used MSConfig to disable all instances of the malware trying to run at windows startup. Finally got it cleaned off enough to download MBAM from "Safe Mode with Networking"; installed MBAM, scanned and cleaned off the rest of it. This is a really bad infection, I hope others can learn from these comments and avoid falling into the social engineering traps that induce these infections.

Cloud AV disabled my mouse and keyboard as well..therefore I can't click anything under any safemode options. The mouse will only move under the repair mode. Trying to repair and restore system is useless. Any ideas on removing it from the command prompt under repair mode (x:).

A QR code (Quick Response Code) is a machine-readable code which stores URLs and other information. This code can be read using a camera on a smartphone or a tablet. Scan this QR code to have an easy access removal guide of Cloud Antivirus 2012 on your mobile device.
We Recommend: