PC Defender 360 is a rogue antivirus program created by cyber criminals. The main purpose of this fake security scanner is to scare unsuspecting PC users into believing that their computers are infected with high-risk malware, and then encouraging them to purchase a useless program.

After a few minutes, the rogue program generates a large list of supposedly-detected malware and viruses and demands payment for the full version of the program, which purportedly eliminates the 'detected' security threats. In fact, none of the detected security infections exist - PC Defender 360 is a scam, which attempts to trick PC users into buying the 'full version'. 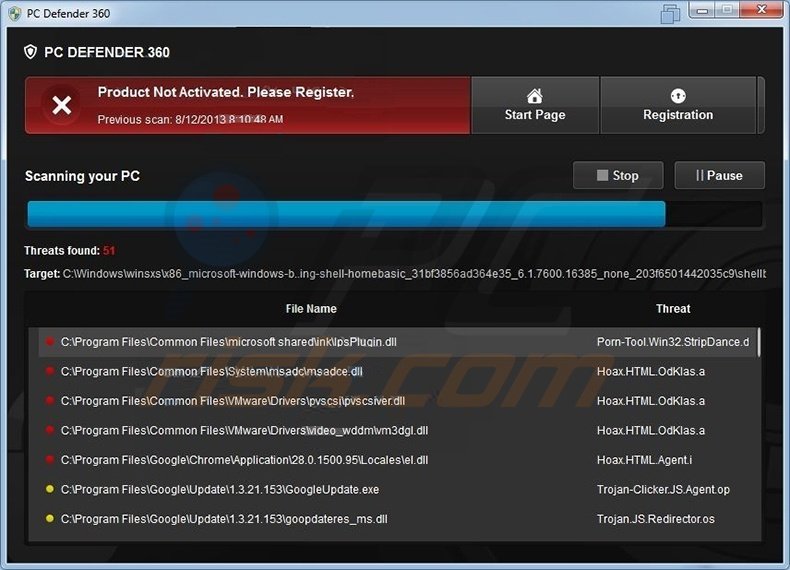 If you observe PC Defender 360 scanning your computer for security infections, your PC is infected with a rogue antivirus program. Do not trust it or pay for the full version, it is a scam.

PC Defender 360 adopts a professional-looking user interface, however, this is its only similarity to legitimate antivirus programs. This software is a scam, since it has no virus definition database or virus scan engine - it simply relies on fake security scans and false security warning pop-ups in order to trick PC users into buying the 'full version'.

Note that buying this program is equivalent to sending your money to cyber criminals, and moreover, by purchasing this scam, you will divulge your banking information, which could lead to further thefts from your account.

If you have already paid for PC Defender 360, contact your credit card company and dispute the changes, explaining that you have been tricked into buying a fake antivirus program. To remove this scam from your computer, use the removal instructions provided. 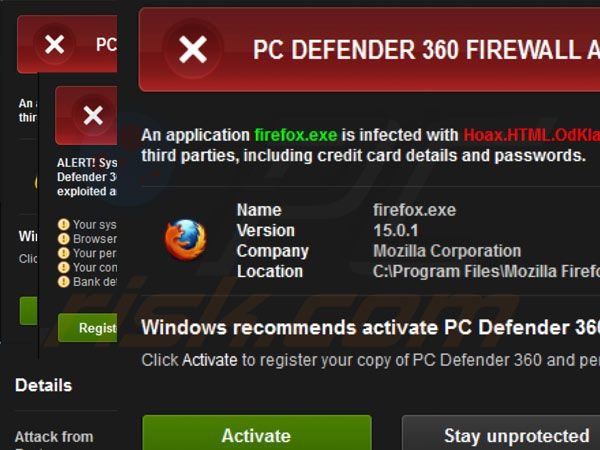 PC Defender 360 Firewall Alert.
iexplore.exe is infected with not-a-virus:AdWare.Win32.WhiteSmoke.a. Private data can be stolen by third parties, including credit card details and passwords.

Upgrade to full version of PC Defender 360 software package now! Clean your system and ward off new attacks against your system integrity and sensitive data. FREE daily updates and online protection from web-based intrusions are already in the bundle.

PC Defender 360 - Your system is left vulnerable to all types of online infections and instructions. Copies of malware already planted in your system contact their originating servers for further spreading and taking control over your system. Enable Internet Security to prevent identity theft and system damage.

PC Defender 360 - Your system is left vulnerable for spyware attacks. All your personal information, including credit card numbers and password can be stolen. Enable Personal Security to prevent thefts.

PC Defender 360 - No PS activity is analysed for possible spyware traces. Harmful programs of known and new types can damage your system and cause data loss and identity theft. No real-time detection and protection is used.

PC Defender 360 - No web traffic, activity and content is monitored. Spyware and malware can use your web browsers as a gateway to sensitive areas of your system. No malicious code in web pages is detected and blocked.

ATTENTION: DANGER! System scan for spyware, adware, trojans and viruses has been finished. PC Defender 360 detected 105 critical system objects. These security breaches may be exploited and lead to the following:
Your system becomes a target for spam and bulky, intruding Ads
Browser crashes frequently and web access speed decreases
Your personal files, photos, documents and passwords get stolen
Your computer is used for criminal activity behind your back
Bank details and credit card information get disclosed

IMPORTANT! Before downloading the anti-spyware program to eliminate this rogue antivirus program: Click the "Registration" button located at the top right corner of the PC Defender 360 main window. 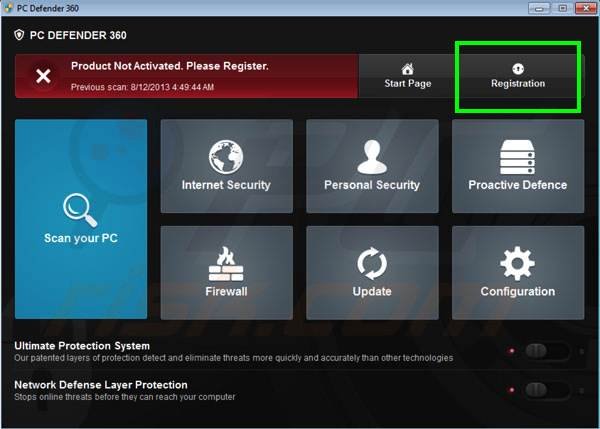 In the opened registration window, click on the "Enter Activation Code" button: 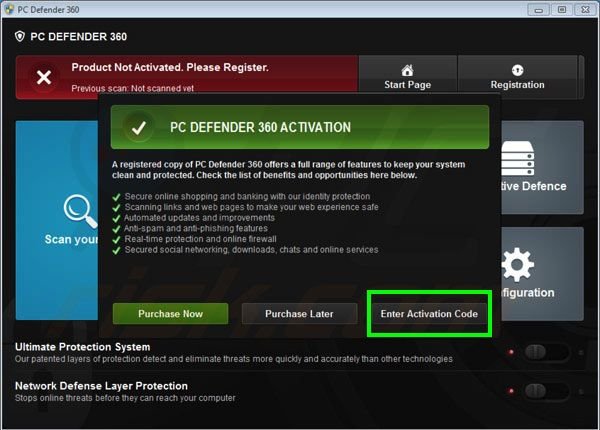 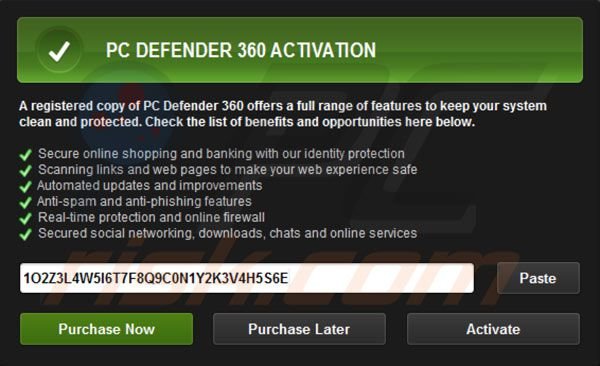 PC Defender 360 will thank you for activation .This step will trick this rogue antivirus software into behaving as though you have paid for the full version and make the removal process of PC Defender 360 less complicated. You will also be able to use your Internet browser/s and download legitimate antivirus and anti-spyware programs.

Note that you should never pay for the full version of fake antivirus programs - you will lose your money and your banking information will be at risk. If you have paid for a rogue program, contact your credit card company and dispute the charges.

After entering the registration key and activating PC Defender 360, restart your computer and download the recommended malware removal software to completely remove this rogue antivirus program from your computer.

Note that entering the retrieved activation code does not remove PC Defender 360 - fake registration simply makes the removal process less complicated. If you do not remove this bogus software from your system, you may encounter further security infections, privacy issues, and identity thefts.

NOTE: If you cannot run the anti-spyware software, try right-clicking on it and selecting "Run as administrator". If the installation of spyware remover fails, or you cannot execute .exe files, try running our Customized installer.

If, after or before, the removal of this fake antivirus program, you cannot run any installed software, download the registry fix (link below). Save it to your computer, double click, click "Yes", and then click "OK". After rebooting your PC, file associations should be fixed.

In the Search field, enter this link: www.pcrisk.com/installer.com and then press ENTER.

When PC Defender 360 completes the fake security scan, click the "Registration" button on the top-right corner of this program, when the registration window is opened, click  "Enter Activation Code"

When PC Defender 360 opens the Activation window, enter this registry key: 1O2Z3L4W5I6T7F8Q9C0N1Y2K3V4H5S6E into the "Registry key:" field and click  the "Activate" button. PC Defender 360 will then thank you for registration and begin removing the "infections" previously detected.  Do not worry - these infections (malware, viruses, and Trojans) are fake.

Restart your computer. After restart, your Internet browsers will start to function normally and you will be able to download and install anti-spyware software to remove the infection (download button below). Note that activation does not remove PC Defender 360 - this rogue will run in the background and you are advised to remove it as soon as possible.

Step 3
This fake antivirus program modifies the system Hosts file. The Hosts file is used to resolve canonical names of websites to IP addresses. When it is changed, the user may be redirected to malicious sites, despite seeing legitimate URLs in address bar. It is difficult to determine sites are genuine when the Hosts file is modified.

Step 4
Download the Spyware remover, or install and run it if already downloaded.

Computer users who are dealing with a rogue security software shouldn't buy it's full version. By paying for a license key of a fake antivirus program users would send their money and banking information to cyber criminals. Users who have already entered their credit card number (or other sensitive information) when asked by such bogus software should inform their credit card company that they have been tricked into buying a rogue security software. Screenshot of a web page used to lure computer users into paying for a non-existent full version of pc defender 360 rogue and other rogue antivirus programs:

To protect your computer from pc defender 360 rogue and other rogue antivirus programs users should:

If you have additional information on pc defender 360 rogue or it's removal please share your knowledge in the comments section below.

Scan this QR code to have an easy access removal guide of PC Defender 360 Rogue on your mobile device.
We Recommend: