These programs display fake hard disk drive errors with the intention of scaring PC users into purchasing the 'full version' of the program. 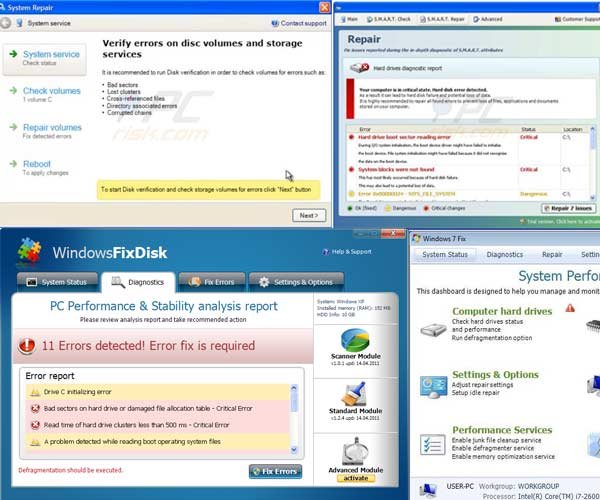 This trickery is applied to give the appearance that the computer has acquired serious HDD-related issues. Note that bogus programs from this family do not actually delete any files - they merely hide them.

Further research of the FakeSysDef family reveals that these programs are similar to fake antivirus programs, however, they employ slightly different tactics to coerce users into paying for the 'full version'. Whilst fake antivirus software mimics the detection of various viruses and Trojans, fake system hardware scanners 'identify' various hardware issues.

Both types of rogue software are designed to encourage computer users to believe the alerts and pay for the 'full versions' - supposedly to fix the issues.

If you observe a program, which generates various hardware-related warning messages (statements regarding potential data loss), and you have not willingly installed it, your PC is infected with a rogue program from the FakeSysDef family. The correct way to deal with this bogus software is to eliminate it from your system.

To protect your PC from rogue software, use legitimate antivirus and anti-spyware programs and keep your operating system and installed software up-to-date - this drastically reduces the possibility of security problems.

Windows detected a hard disk problem.
A potential disk failure may cause loss of files, applications and documents stored on the hard disk. Please try not to use this computer until the hard disk is fixed or replaced. Scan and fix (recommended) Cancel and reboot.

Hard Drive Failure - The system has detected a problem with one or more installed IDE/SATA hard disks. It is recommended that you restart the system.

Your computer is in critical state. Hard disk error detected. As a result it can lead to hard disk failure and potential loss of data. It is highly recommended to repair all found errors to prevent loss of lives, applications and documents stored on your computer.

System block were not found - This has most likely occurred because of hard disk failure. This may also lead to a potential loss of data.

List of known name variations used by rogue programs from the FakeSysDef family:

Cyber criminals responsible for creating rogue programs from this family use identical license keys, which can be used to 'fake register' their bogus software.

Wait until rogue program completes the fake hard disk drive scan, click "Repair 7 Issues" button, in the opened window choose "I already have an activation code. Click here to activate" and enter this information (use one of the provided registry keys):

By entering this information you will make the removal process of any program from the FakeSysDef family less complicated.

Note that entering the retrieved registry keys does not remove the rogue program from your computer - use the button below to download the recommended malware removal software, install it and run a full system scan to completely remove the fake system scanner from your PC.

Note that System Repair hides some of your files (desktop shortcuts, Start Menu items, etc.) - if after removal of the rogue program you are unable to find your files, use the following instructions.

If you were unable to remove fake system scanners using the provided instructions, follow these steps:

Complete these steps if after removal of FakeSysDef rogue your Desktop icons or files are hidden:

Step 1
Rogue programs from this family hide most user files. If you cannot see your files, do not panic - your files are not removed, they are simply hidden. After removing this rogue program, download and run this tool to unhide your files (download link below).

It is important to run this tool only when System Repair has been removed from your computer. This unhide files tool will be useless if run on an infected computer.

When the unhide files tool completes, your Windows desktop icons may still be missing. To fix missing desktop items, download this .REG file. Double click it, click "Yes" and then click "OK". Reboot your computer, your desktop should now be visible.

Step 2
Reboot your computer and check if everything is OK. Check if you can locate all files. If some remain missing, open My Computer, Click Tools, then select Folder Options... and under View tab select the radio button "Show hidden files and folders", press OK.

Now you should see all hidden files and folders. To unhide them, Right click on the file or folder, select Properties and uncheck the "Hidden" Check box.

Computer users who are dealing with a rogue security software shouldn't buy it's full version. By paying for a license key of a fake antivirus program users would send their money and banking information to cyber criminals. Users who have already entered their credit card number (or other sensitive information) when asked by such bogus software should inform their credit card company that they have been tricked into buying a rogue security software. Screenshot of a web page used to lure computer users into paying for a non-existent full version of fake hdd and other rogue antivirus programs:

To protect your computer from fake hdd and other rogue antivirus programs users should:

If you have additional information on fake hdd or it's removal please share your knowledge in the comments section below.

Scan this QR code to have an easy access removal guide of Fake HDD on your mobile device.
We Recommend: