What is Antivirus .NET?

This rogue program is derived from the same family as Antivirus Action and Antivirus Scan. This fake software is distributed through various Trojans, and when installed on your computer, the fake scanner will block legitimate programs.

The creators of this rogue program also use other methods to propagate it, so be careful when using Facebook, Twitter, and opening attachments within your emails. When installed on your computer, it starts automatically on each Windows start-up and displays various security warnings to trick people into purchasing a full version. 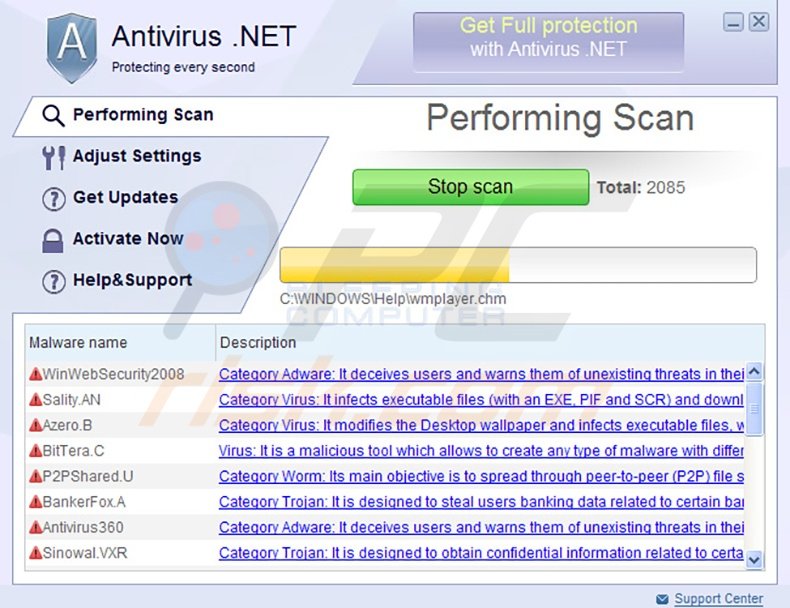 Do not fall for this trick. This program is useless and designed only to steal money from you.

If you have already purchased the program, you should contact your credit card company and explain that you have been tricked into purchasing fake security software. In certain cases, it is a wise precaution to block your credit card.

Hackers may use your banking information for stealing more money from you. Bear in mind that all messages displayed by Antivirus .NET are fake.

This software will attempt to trick you into purchasing a full version. You should remove Antivirus .NET from your computer as soon as possible.

This program is a malicious application that generates fake processes with the intention of selling a license to remove security threats. These threats do not exist on your PC.

Internet criminals behind this fake software make money from unsuspecting computer users who fall for their trickery. To further scare you into believing that your PC is in danger of security infections, Antivirus .NET generates multiple pop-ups stating that your computer is being attacked by viruses.

To protect itself from removal, this rogue program will block your Internet access and disable certain default Windows functions. Use the removal guide provided to help you remove Antivirus .NET from your computer.

“Windows Security alert. Windows reports that your computer is infected. Antivirus software helps to protect your computer against viruses and other security threats. Click here to scan your computer. Your system might be at risk now.”
“INFILTRATION ALERT. Your computer is being attacked by an Internet Virus. It could be a password-stealing attack, Trojan Dropper, or similar.”
“Internet Explorer Warning – visiting this web site may harm your computer! Most likely causes: The website contains exploits that can launch a malicious code on your computer.”
“Suspicious network activity detected. There might be active spyware running on your computer.”

3 .Download HijackThis and save it to your desktop. Some malicious programs are able to block HijackThis, so when you click the download link, in the Save dialog, rename HijackThis.exe to iexplore.exe and only then click the Save button.

(Bear in mind that rogue programs are continually mutating and thus entries in the HijackThis log may be different. In this case, look for the similar entries).

5. After this procedure, you should be able to access your desktop. You should now download legitimate anti-spyware software to fully remove Antivirus .NET from your computer.

If you are unable to remove Antivirus .NET, you can use these manual removal instructions. Use them at your own risk, since if you do not have strong computer knowledge, you could harm your operating system.

Computer users who are dealing with a rogue security software shouldn't buy it's full version. By paying for a license key of a fake antivirus program users would send their money and banking information to cyber criminals. Users who have already entered their credit card number (or other sensitive information) when asked by such bogus software should inform their credit card company that they have been tricked into buying a rogue security software. Screenshot of a web page used to lure computer users into paying for a non-existent full version of antivirus .net rogue and other rogue antivirus programs:

To protect your computer from antivirus .net rogue and other rogue antivirus programs users should:

If you have additional information on antivirus .net rogue or it's removal please share your knowledge in the comments section below.

Scan this QR code to have an easy access removal guide of Antivirus .NET Rogue on your mobile device.
We Recommend: