AntiVira Av is malicious software created by Internet criminals with the purpose of tricking computer users into purchasing a license key to remove ‘security threats’ which do not actually exist. This program generates a list of critical risk security infections and then coerces users into buying a license to remove them.

This fake program is designed to steal money from your bank account. It hijacks your Internet browser and blocks legitimate Windows applications.

This software is a scam, completely useless, and should be removed from your computer immediately. 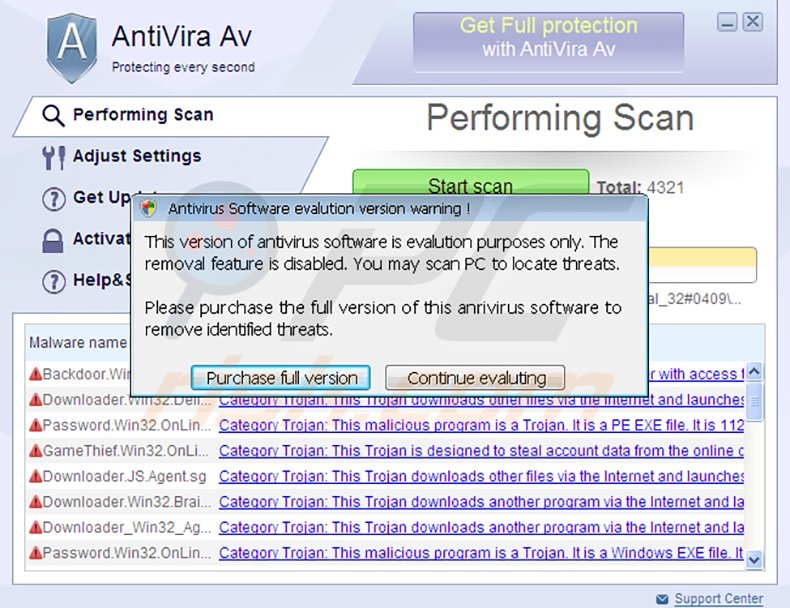 If you have already purchased a fake license for this software, you should contact your credit card company and explain that you have been tricked into buying a fake antivirus program. This fake program is distributed by various infected websites, spam emails, and Trojans.

The creators of this bogus program also use Twitter, Facebook, and other social networks to propagate this scam. After installation of this fake software, it will configure itself to run automatically on system start-up.

The software will block your desktop and perform a fake security scan. After the scan, AntiVira Av will report that your computer is infected with various viruses and spyware.

To remove these infections you will be encouraged to purchase a license. Do not buy the license, it is a scam.

The ‘infections’ and security warning messages are fake. None of the reported infections exist on your computer, and therefore, you should ignore them and remove this bogus program from your computer.

You should not mistake this rogue program for a legitimate antivirus program called Avira, which is a well-known security suite and trusted by many computer users. Internet criminals have named their rogue program similarly in order to further persuade PC users to purchase license keys.

These keys purportedly eliminate security issues from their computers, but they are in fact useless. Do not trust AntiVira AV.

This program makes false promises of removing security issues, and if you have noticed this program on your computer, you use the information provided here to remove this fake software immediately.

The following fake messages are generated by AntiVira Av:

Ignore these messages and use this removal guide to completely remove AntiVira Av from your computer.

If you are unable to remove AntiVira Av, you can use these manual removal instructions. Use them at your own risk, since if you do not have strong computer knowledge, you could harm your operating system.

Computer users who are dealing with a rogue security software shouldn't buy it's full version. By paying for a license key of a fake antivirus program users would send their money and banking information to cyber criminals. Users who have already entered their credit card number (or other sensitive information) when asked by such bogus software should inform their credit card company that they have been tricked into buying a rogue security software. Screenshot of a web page used to lure computer users into paying for a non-existent full version of antivira antivirus and other rogue antivirus programs:

To protect your computer from antivira antivirus and other rogue antivirus programs users should:

If you have additional information on antivira antivirus or it's removal please share your knowledge in the comments section below.

Scan this QR code to have an easy access removal guide of Antivira Antivirus on your mobile device.
We Recommend: