What is Zentom System Guard?

Zentom System Guard is a fake computer program that attempts to sell you a non existent full version. This program is distributed through Trojans and your computer could become infected by downloading fake Flash Player updates or you could have been tricked into downloading fake video codecs.

The Internet is flooded with misleading websites that proliferate fake computer programs and you should express great caution when downloading anything from unknown sources. Zentom System Guard is propagated via a Trojan, which downloads a fake Windows update after infecting your computer.

You will be encouraged to install this update, and rather than a genuine Windows security update, your computer will be infected with Zentom System Guard.  You should not buy this software, it is useless - merely imitating the process of scanning your computer, and then displaying fake results.

This action is performed to scare you into believing that your PC has various problems. 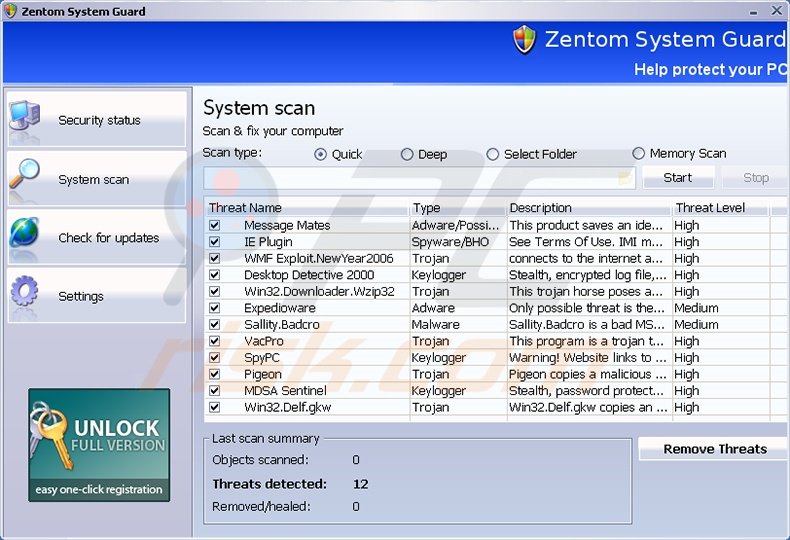 Zentom System Guard mimics the detection of many infected files on your PC, and therefore, you should not trust this program. Do not manually delete files identified as spyware, as you could damage your operating system and be unable to boot your computer.

As soon as you notice Zentom System Guard on your computer, you should use this step-by-step removal guide to remove it as soon as possible.

The following fake security warning pop-ups will be displayed to scare you into believing that your PC is infected with various spyware and malware:

"Trojan.Spy threat has been detected. This threat module advertises websites with explicit content. Be advised of such content being possibly illegal. Please click the button below to locate and remove this threat now."

"Warning! Attack detected! Zentom System Guard has detected that somebody is trying to steal Your private data remotely via Trojan.Win32.Generic!BT. Transfer of your private data via the internet will start in: 10 seconds. We strongly recommend you to block attack immediately."

Before downloading removal tool: enter the Zentom System Guard registration key in the registration window. Click the "unlock full version" banner at the bottom-left side of main program window and enter this key:

Entering this key will not remove the infection, but will allow some Windows features previously disabled by the infection, and thus making removal of Zentom System Guard  easier. By entering the registration key, you will not have to pay money, however, the program will behave as if you have paid and will change its state to "registered".

Some spyware infections may block the downloading of spyware removers. If you cannot download it using the default location, try one of the alternative download locations below:

If you are unable to remove Zentom System Guard, you can use these manual removal instructions. Use them at your own risk, since if you do not have strong computer knowledge, you could harm your operating system.

Computer users who are dealing with a rogue security software shouldn't buy it's full version. By paying for a license key of a fake antivirus program users would send their money and banking information to cyber criminals. Users who have already entered their credit card number (or other sensitive information) when asked by such bogus software should inform their credit card company that they have been tricked into buying a rogue security software. Screenshot of a web page used to lure computer users into paying for a non-existent full version of zentom system guard rogue and other rogue antivirus programs:

To protect your computer from zentom system guard rogue and other rogue antivirus programs users should:

If you are experiencing problems while trying to remove zentom system guard rogue from your computer, please ask for assistance in our malware removal forum.

If you have additional information on zentom system guard rogue or it's removal please share your knowledge in the comments section below.

I had CA internet security suite installed and began to scan to try and remove it. Afterwards the computer started slowing down more and more. I wasn't able to do anything and was forced to hit the power switch to shut it down. Now the harddrive isn't be detected. Any ideas?

Thanks the serial number is the only method I could find that worked.. Good job

Scan this QR code to have an easy access removal guide of Zentom System Guard Rogue on your mobile device.
We Recommend: