What is Antivirus Protection 2012?

Antivirus protection is a misleading program that attempts to mimic a legitimate computer security program. This rogue program self-installs on your computer without permission, and then creates random files on your hard drive, supposedly 'detecting' them as being infected with spyware/malware.

Do not trust this program - it bears no relation to a real security suite. 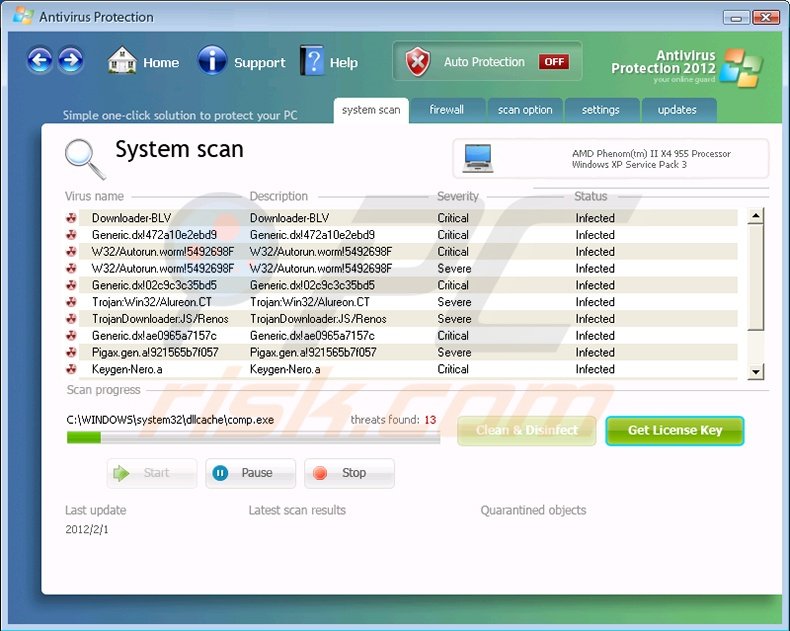 Antivirus Protection 2012 is a fake computer security scanner that attempts to sell a useless license key to unsuspecting computer users. This bogus program is derived from the same family of misleading applications as Security Monitor 2012, Security Solution 2011, Antivirus System 2011, and others.

Fake antivirus programs such as Antivirus Protection 2012 are usually distributed via malware networks or by tricking computer users into downloading it when disguised as a Flash Player update. Internet criminals often change their distribution channels and methods, and so in order to protect your PC from fake scanners such as Antivirus Protection 2012, always use legitimate antivirus and anti-spyware programs.

When Antivirus Protection 2012 infects your computer, it will modify your operating system's registry, blocking default Windows functions and making it difficult to remove from your PC. This rogue program starts each time you boot your operating system and initiates a fake computer security scan.

While Antivirus Protection 2012 has the appearance of a genuine security program, you should not trust this program. Internet criminals designed it to appear convincing in order to trick you into buying a license for a fake security program.

Ignore these warning messages - they are as fake as the security check performed by this rogue software. Do not trust this program. If you notice Antivirus Protection 2012 on your computer, remove it immediately.

Before downloading the remover: Click the 'Activate' button located on the bottom right corner of the Antivirus Protection 2012 program window, and when the registration window opens, enter this registration key.

If you are unable to remove Antivirus Protection 2012, you can use these manual removal instructions. Use them at your own risk, since if you do not have strong computer knowledge, you could harm your operating system.

Computer users who are dealing with a rogue security software shouldn't buy it's full version. By paying for a license key of a fake antivirus program users would send their money and banking information to cyber criminals. Users who have already entered their credit card number (or other sensitive information) when asked by such bogus software should inform their credit card company that they have been tricked into buying a rogue security software. Screenshot of a web page used to lure computer users into paying for a non-existent full version of antivirus protection 2012 rogue and other rogue antivirus programs:

To protect your computer from antivirus protection 2012 rogue and other rogue antivirus programs users should:

If you have additional information on antivirus protection 2012 rogue or it's removal please share your knowledge in the comments section below.

Scan this QR code to have an easy access removal guide of Antivirus Protection 2012 Rogue on your mobile device.
We Recommend: