What is Attentive Antivirus?

Attentive Antivirus is a fake antivirus program, which attempts to trick unsuspecting PC users into buying a useless 'full version' by generating fake security scans and mimicking the detection of various security threats. This program is developed by cyber criminals with the purpose of extorting money from Internet users who fall for the trickery displayed by this fake security scanner.

To scare computer users into activating a 'full version' of Attentive Antivirus, this rogue software imitates a security scan and generates a large list of supposedly-detected security infections.

In fact, none of the 'detected' malware or viruses actually exist on users' PCs - this bogus program mimics detection of various security threats simply to scare computer users into activating the 'full version', which purportedly fixes any computer security issues. 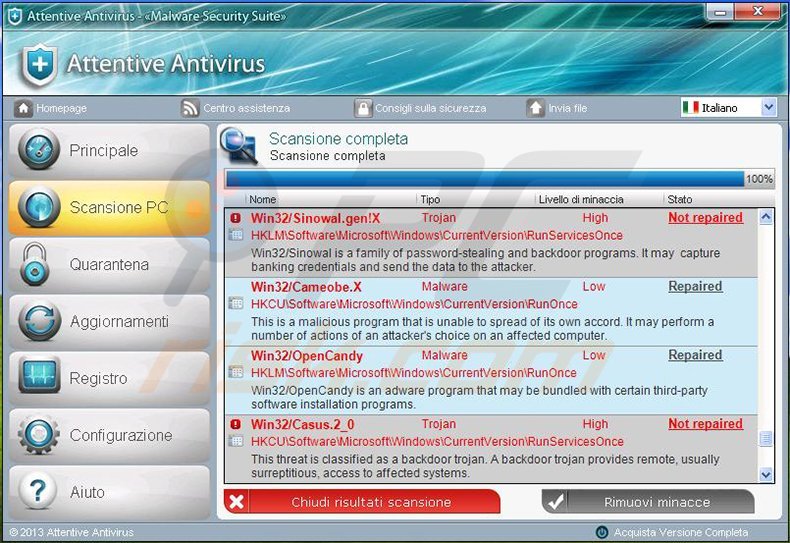 PC users should be aware that paying for this program is equivalent to sending money to the cyber criminals responsible for creating this scam. Furthermore, their banking information will be at risk.

Computer users who have already 'activated' a full version of Attentive Antivirus should immediately contact their credit card company and dispute the charges, explaining that they have been tricked into buying fake antivirus software.

This rogue antivirus program originates from a family called WinWebSec, and after successful infiltration, it blocks execution of installed programs and disables the Task Manager. If you see Attentive Antivirus 'scanning' your computer for security threats, do not trust this program, it is a scam. The correct way to deal with this rogue program is to eliminate is from your system.

Attentive Antivirus infects users' computers using 'exploit kits' and drive-by downloads. The best way to protect your computer from such fake antivirus programs is to use legitimate antivirus and anti-spyware software and keep your installed software (Java, Flash, etc.) up-to-date.

Cyber criminals responsible for developing this scam have slightly changed its behavior - previous variants encouraged users to activate their full versions immediately after clicking the 'remove threats' button, however, Attentive Antivirus mimics removal of a few security infections before demanding purchase of the 'full version'.

This change is just a part of the evolving scam. Do not trust this bogus program or divulge your banking information to cyber criminals. If your computer is infected with this fake security scanner, use the removal guide provided to eliminate it from your PC. 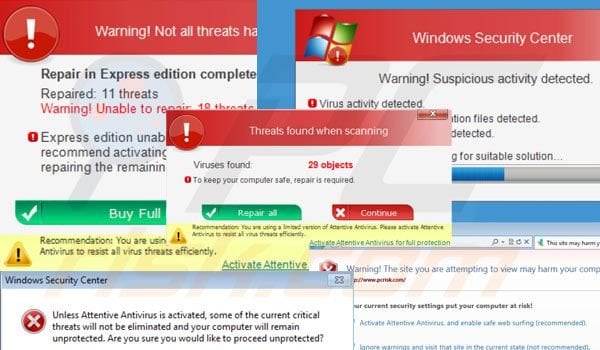 "Unless Attentive Antivirus is activated, some of the current critical threats will not be eliminated and your computer will remain unprotected. Are you sure you would like to precede unprotected?"

"Warning! the site you are attempting to view may harm your computer! You current security settings put your computer at risk! Activate Attentive Antivirus and enable safe web surfing (recommended). Ignore warnings and visit that site is the current state (not recommended).

Attentive Antivirus - Warning! Suspicious activity detected. To keep your computer safe, the threat must be blocked".

If your Internet browsers are blocked by the "Warning! The site you are trying to visit may harm your computer! Your security setting level puts your computer at risk!" message, please click "Ignore warnings and visit that site in the current state (not recommended)" and continue with the download process.

If you cannot run the remover, try to download an alternate installer (it is renamed to iexplore.exe, since most fake antivirus programs do not block execution of files with this name)

If you are still unable to download the recommended malware removal software - before downloading, enter a retrieved activation key in the activation window of Attentive Antivirus. Click "Buy full edition" button at the bottom of the main window of this fake antivirus software and enter this key:

Note that entering this activation key will not remove Attentive Antivirus - it will simply make the removal process less complicated. This fake antivirus software will stop generating fake security warning messages and will allow execution of legitimate antivirus and anti-spyware programs.

2. Attentive Antivirus modifies the system Hosts file. The Hosts file is used to resolve canonical names of websites to IP addresses. When it is changed, the user may be redirected to malicious sites, despite seeing legitimate URLs in address bar. It is difficult to determine sites are genuine when the Hosts file is modified.

3. Download and install recommended malware removal software to completely remove this fake antivirus from your PC.

1. Wait until Attentive Antivirus rogue antivirus completes its fake security scan and click the "Remove Threats" button. You can also click the "Buy full edition" button on the bottom right corner of the main window of this rogue program. In the opened window click the "I already have activation key" button. 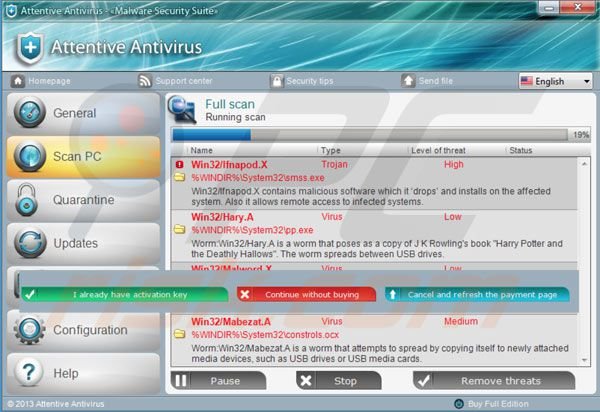 2. In the opened window enter this retrieved registry key: AF03E-A1B69411-5E496BEE-92A70D00-1AD697F6 This will trick Attentive Antivirus into behaving as though you have already paid for the full version.

This step makes the removal process of this rogue antivirus program less complicated, since after entering this registry key, Attentive Antivirus allows execution of installed software (including Internet browsers) and you will be able to download anti-spyware software without various interruptions. 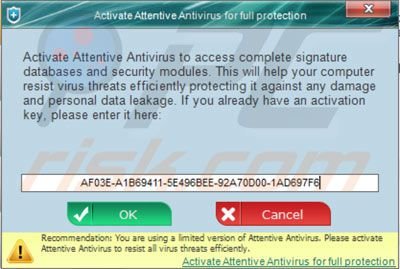 3. After entering this licence key, Attentive Antivirus generates some messages congratulating you for registration and imitates the removal process of previously 'detected' malware and virus infections. 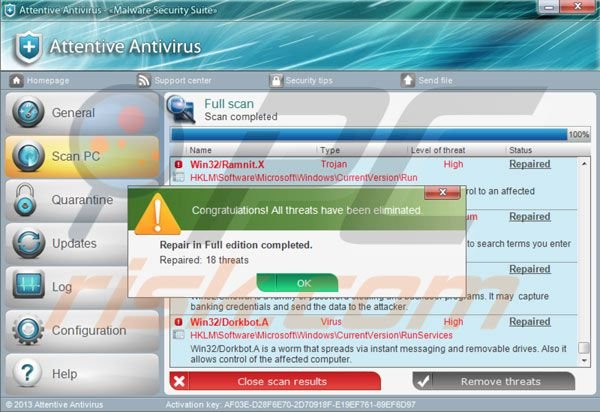 Computer users who are dealing with a rogue security software shouldn't buy it's full version. By paying for a license key of a fake antivirus program users would send their money and banking information to cyber criminals. Users who have already entered their credit card number (or other sensitive information) when asked by such bogus software should inform their credit card company that they have been tricked into buying a rogue security software. Screenshot of a web page used to lure computer users into paying for a non-existent full version of attentive antivirus rogue and other rogue antivirus programs:

To protect your computer from attentive antivirus rogue and other rogue antivirus programs users should:

If you have additional information on attentive antivirus rogue or it's removal please share your knowledge in the comments section below.

Scan this QR code to have an easy access removal guide of Attentive Antivirus Rogue on your mobile device.
We Recommend: