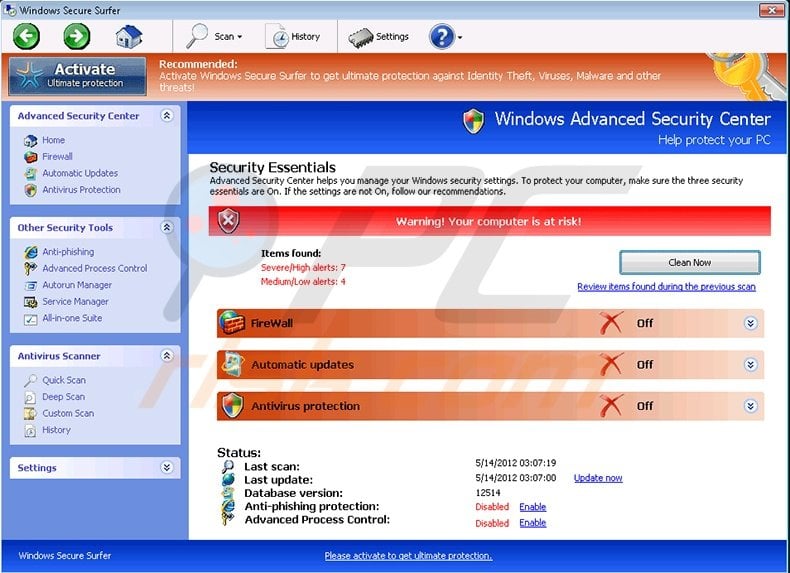 In most cases, these bogus programs are identical other than the use of different names. Some of the most recent variants use the following names:

After successful infiltration, rogue programs from the FakeVimes family modify registry entries of the infected operating system and configure themselves to start automatically on each system start-up. Moreover, these rogue programs disable execution of installed programs (including legitimate antivirus and anti-spyware programs) and disable the Task Manager. Cyber criminals also use two types of user interface within their rogue programs. Bogus programs from the FakeVimes family are designed to appear as if they are genuine Windows applications. 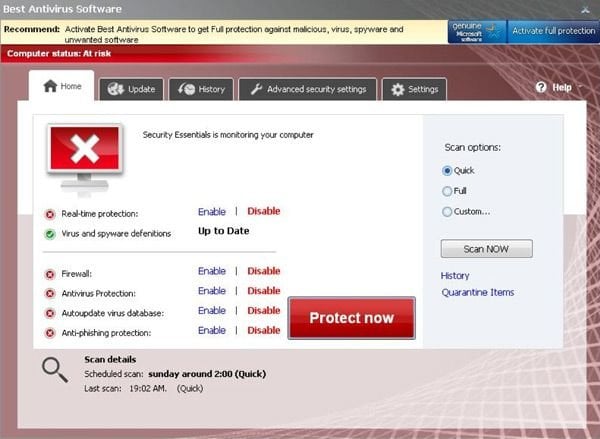 Do not trust any of these programs, since they use fake security scans and fake security warning messages in order to trick PC users into buying their 'full versions'. Note that Microsoft does not sell any antivirus programs. The only antivirus program developed by Microsoft is Microsoft Security Essentials and is provided free of charge. Computer users should be aware that buying a fake antivirus program is equivalent to sending their money to cyber criminals, and furthermore, could lead to additional money thefts from their accounts. If you have already paid for any bogus antivirus program, contact your credit card company and dispute the charges, explaining that you have been tricked into purchasing fake antivirus software. If you observe a program (as in the provided screenshots) purportedly 'scanning' your computer for security infections, and demanding that you purchase the 'full version' in order to remove them, you are dealing with fake antivirus software. Do not trust this scam - use the removal guide provided to eliminate it.

"Error Key-logger activity detected. System information security is at risk. It is recommended to activate protection and run a full system scan"

"Microsoft Security Essentials detected potential threats that might compromise your privacy or damage your computer. You need to clean your computer immediately to prevent the system crash"

Before downloading the remover for any fake antivirus program from Win32/FakeVimes family, use a retrieved license key to 'fake register' the rogue programs.

Click the question mark icon at the top of the main window of this fake program, choose "Activate Now" and enter this registration code:
0W000-000B0-00T00-E0020

Entering this key will not remove the fake antivirus program, however, it will make the removal process less complicated. Activated programs from the FakeVimes family do not block execution of installed programs, thus making their removal a relatively easy task.

Step 1
Start your computer in Safe Mode. Click Start, click Shut Down, click Restart, click OK. During your computer starting process press the F8 key on your keyboard multiple times until you see the Windows Advanced Option menu, then select Safe Mode with Networking from the list.

We now need to remove the proxy settings. Fake antivirus programs from this family add a 'proxy' to your Internet connection settings in order to display various errors when you attempt to access the Internet. Open Internet Explorer, click Tools, and select Internet Options. Then select the "Connections" tab.

In the "Connections" tab, click LAN settings, if a "Use a proxy server for your LAN" is checked, uncheck it and press OK.

Step 3
Download HijackThis and save it to your desktop. Some malicious programs are able to block HijackThis, so when you click the download link, in the Save dialog, rename HijackThis.exe to iexplore.exe and only then click the Save button. After saving the file to your desktop, double click it. In the main HijackThis window click the “Do a system scan only” button. Select the following entry (place a tick at the left of the entry):

O4 - HKCU\..\Run: [Inspector] %AppData%\Protector.exe (Protector.exe file may have 3 or more random characters at the end of it's file name like ProtectionGQY.exe)

After selecting the required entries, click "Fix Checked" and these entries will be removed. After this procedure, close HijackThis and proceed to the next removal step.

Step 5
After removing any fake antivirus program from FakeVimes family, you will need to reset your Hosts file. Do not skip this step, since this malware modifies your Hosts file and you will encounter browser redirect problems if malicious entries are not removed.

Other tools known to remove Win32/FakeVimes:

If you were unable to remove Win32/FakeVimes using the steps above, use this manual removal instruction. Use it at your own risk, since if you do not have strong computer knowledge you could harm your operating system. Be careful and use it only if you are an experienced computer user. (Instructions on how to end processes, remove registry entries...)

random.exe
Protector.exe (Protector.exe file may have 3 or more random characters at the end of the file name such as ProtectionGQY.exe)

%StartMenu%\Programs\random.lnk
%AppData%\Protector.exe (NOTE: this file may have various symbols at the end of the name. Look for a similar filename pattern and remove it)
%AppData%\result.db
%Desktop%\random.lnk

Computer users who are dealing with a rogue security software shouldn't buy it's full version. By paying for a license key of a fake antivirus program users would send their money and banking information to cyber criminals. Users who have already entered their credit card number (or other sensitive information) when asked by such bogus software should inform their credit card company that they have been tricked into buying a rogue security software. Screenshot of a web page used to lure computer users into paying for a non-existent full version of fakevimes and other rogue antivirus programs:

To protect your computer from fakevimes and other rogue antivirus programs users should:

If you are experiencing problems while trying to remove fakevimes from your computer, please ask for assistance in our malware removal forum.

If you have additional information on fakevimes or it's removal please share your knowledge in the comments section below.

A QR code (Quick Response Code) is a machine-readable code which stores URLs and other information. This code can be read using a camera on a smartphone or a tablet. Scan this QR code to have an easy access removal guide of FakeVimes on your mobile device.
We Recommend: