The FakeRean/Braviax family of fake antivirus programs is developed and distributed by cyber criminals. The main purpose of these rogue programs is to infiltrate users' operating systems and display fake security scans to trick users into purchasing a fake license key.

The Braviax/FakeRean family of rogues is well known for the name-changing capability of its fake antivirus programs. The bogus programs from this family detect the operating system of the computers targeted for infiltration and modify their names accordingly. 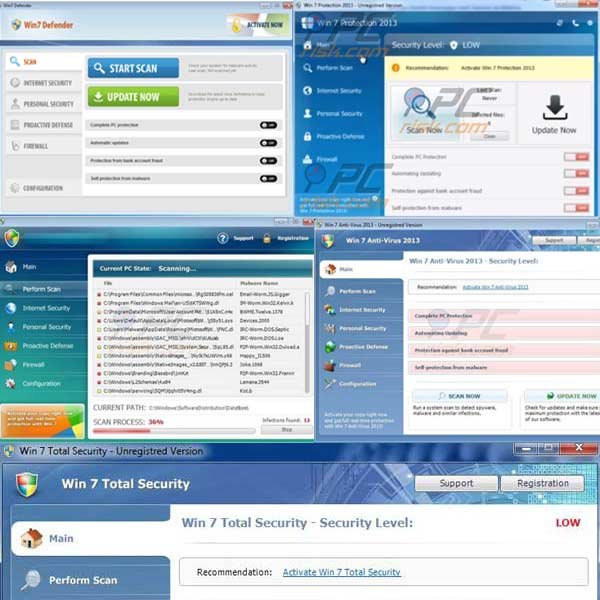 The main reason for distribution of these rogue programs is to convince PC users into believing that their computers are at risk, and then to sell the useless license keys.

In fact, paying for any program from the FakeRean/Braviax family is equivalent to sending your money to cyber criminals - you will lose your money and divulge your banking information, potentially leading to further thefts from your account. PC users should express caution when purchasing security software to protect their computers since the Internet is rife with fake versions.

Common sources of fake antivirus programs from this family are infected email messages, malicious websites, and drive-by downloads. To protect your computer from security infections such as this, keep your operating system and all installed software up-to-date and use legitimate antivirus and anti-spyware software.

The following are the names of some variations used by fake antivirus programs from this family:

Your system becomes a target for spam and bulky, intruding ads
Browser crashes frequently and web access speed decreases
Your personal files, photos, documents and passwords get stolen
Your computer is used for criminal activity behind your back
Bank details and credit card information gets disclosed

Click REGISTER to register your copy of Fake Antivirus Name]! and perform threat removal on your system. The list of infections and vulnerabilities detected will become available after registration.

Entering these keys forces the fake antivirus program into behaving as if you have purchased the license key and allows execution of installed programs (including legitimate antivirus and anti-spyware software).

IMPORTANT! Before downloading: Click the "Registration" button located at the top right corner of the fake antivirus main window, and when the registration window opens, enter this registry key in the "Reg key" field and click "Activate":

When the registration key is entered, the fake antivirus program will behave as if you have purchased the full version and will cease generating fake security warning messages. It will also allow you to run programs and anti-spyware software.

Note that registering this program will not remove it from your PC, it will simply disable the fake pop-up windows and allow to access the Internet. After you enter this key, you can download the recommended spyware remover (use the button below) and remove this bogus antivirus software.

NOTE: If you cannot run remover, right-click on it and select "Run as administrator". If installation of spyware remover fails, or you cannot open .exe files, try the Customized installer built by our technicians to bypass spyware infections and install removers regardless. It is a DOS program, that most spyware does not block.

If, after or before, removal of this scam you are unable to run your installed programs, the fake antivirus program has modified your operating system's .exe file associations.

When you try to run any executable, Windows will open the "select program" dialogue and will not execute the program. To fix this, download a registry fix (link below). Save it to your computer, double click it, click yes and then ok. After rebooting your PC, file associations should function normally.

If you cannot open your browser (Internet explorer, Firefox, Google Chrome, or Opera):

Fake antivirus programs from this family hijacks Internet browsers, modify registry settings and disable execution of programs. For such cases, our developers have developed a custom installer.

It is useful when you are unable to browse the Internet or run .exe files. It starts like MS-Dos program, runs some registry fixes, and then initiates execution of a installer. When tested, this installer worked on the Windows 7, Windows Vista and XP operating systems infected with most common spyware infections.

To use this installer, click Windows logo button (Start)

In the search field, enter this link: www.pcrisk.com/installer.com and then press ENTER.
The fake antivirus program will generate a fake warning after pressing ENTER. Ignore it and click "No, stay unprotected..." on this message.

File download dialogue will appear, reporting that you are downloading file installer.com. Click Run, wait for download to finish, and then follow the on-screen instructions. Windows may warn you that opening unknown files may be unsafe. Ignore these warnings.

If your Internet browsers work, use this button to download customized installer.

Manual removal of fake antivirus programs from the FakeRean/Braviax family:

Some spyware block the download of spyware removers. If you are unable to download it using the default location, try one of the alternative download locations below:

If you are still unable to download or run spyware-removing software, please perform these steps:

Step 2
Some variants of this spyware modify the system proxy settings to prevent access to the Internet, or website addresses are redirected to malicious or phishing websites. To reset proxy settings to default, download and run this tool:

Step 3
Fake antivirus programs from this family modify the system Hosts file. The Hosts file is used to resolve canonical names of websites to IP addresses. When it is changed, the user may be redirected to malicious sites, despite seeing legitimate URLs in address bar.

Step 4
That's It! You can now try to download Spyware remover or install and run it if already downloaded.

Other tools known to remove fake antivirus programs from the FakeRean/Braviax family:

Computer users who are dealing with a rogue security software shouldn't buy it's full version. By paying for a license key of a fake antivirus program users would send their money and banking information to cyber criminals. Users who have already entered their credit card number (or other sensitive information) when asked by such bogus software should inform their credit card company that they have been tricked into buying a rogue security software. Screenshot of a web page used to lure computer users into paying for a non-existent full version of braviax and other rogue antivirus programs:

To protect your computer from braviax and other rogue antivirus programs users should:

If you have additional information on braviax or it's removal please share your knowledge in the comments section below.

Scan this QR code to have an easy access removal guide of Braviax on your mobile device.
We Recommend: