This unwanted program will try to fool you into buying it and the software employs various methods in which to do so. It uses a fake virus scan and displays fake alerts indicating that your computer is infected. After the fake security scan, the rogue program will notify you that C:\Program Files\Messenger\msmsgs.exe is infected. You will then be asked to reboot your computer.

This program is capable of blocking execution of legitimate Windows programs, thus making its removal more complicated. It is important to understand that ThinkPoint is a rogue program that should not be trusted. When installed on your computer, this bogus program will imitate a computer security scan and will attempt to trick you into believing that your PC is infected with critical risk security threats. 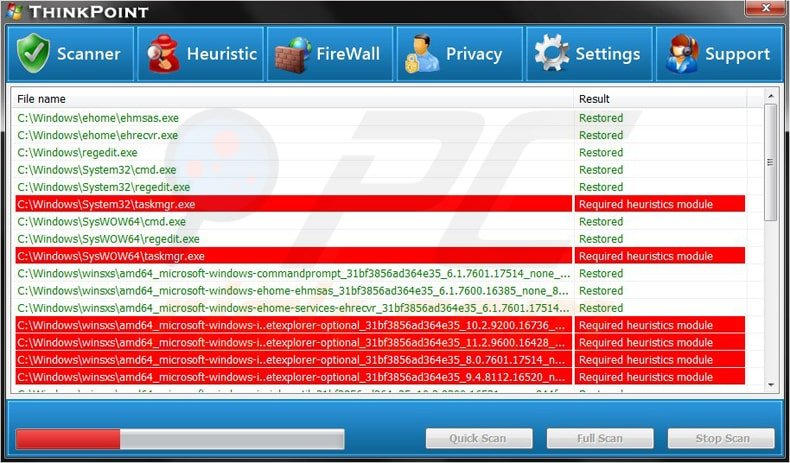 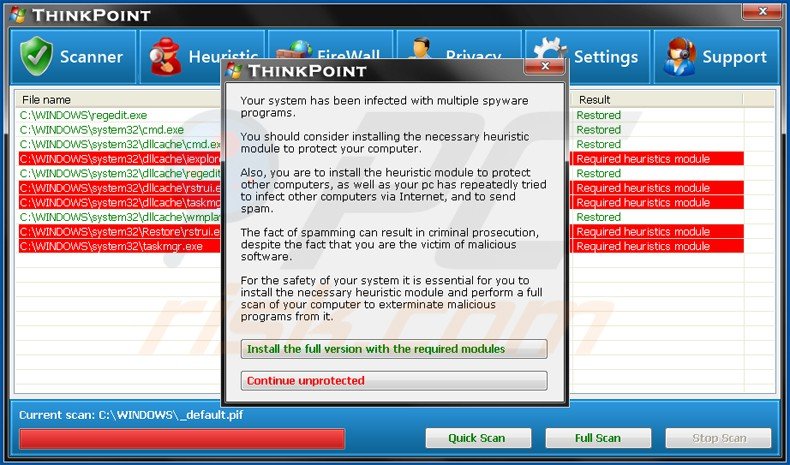 “Microsoft Security Essentials detected potential threats that might compromise your privacy or damage your computer. Your access to these items may be suspended until you take action.”

“Unable to remove threat. Click ‘Scan online’ to remove this threat” or “The application iexplore.exe was launched successfully but was forced to shut down due to security reasons. This happened because the application was infected by a malicious program that might pose a threat to the OS. It is highly recommended that you install the necessary heuristic module and perform a full scan of your computer to exterminate malicious programs.”

ThinkPoint is mostly propagated via e-mail phishing and p2p downloads. Do not buy this program, it is a scam. Internet criminals created this program to scare you into believing that your computer is highly infected with spyware in an attempt to sell you the ThinkPoint license.

The program states that it could remove the detected security issues if you pay for the license. Do not trust ThinkPoint. It is a rogue program that does not actually scan your computer, but ‘detects’ non-existent spyware and malware on your computer and then encourages you to purchase the program to remove these supposed threats.

Use the information provided to remove this bogus program. Screenshot of a fake antivirus program "ThinkPoint":

1. Press ctrl+alt+del (or ctrl+shift+esc) to enter the Task Manager. Select the "Processes" tab.

2. Search for the hotfix.exe tmp.exe and thinkpoint.exe processes. Select each and press "End task". When you are asked if you are sure, click "Yes".

3. When you have terminated the hotfix process, you will see a blank screen. In the Task Manager, click "File", select "New task", and in an opened window type explore.exe and click "OK".

4. After this procedure you should be able to access your desktop. You should now download legitimate anti-spyware software to fully remove ThinkPoint from your computer.

5. After downloading anti-spyware software, install it, update it, and then run a full system scan. Remove all infections found.

If you are unable to remove ThinkPoint, you can use these manual removal instructions. Use them at your own risk, since if you do not have strong computer knowledge, you could harm your operating system. Use them only if you are an experienced computer user. (Instructions on how to end processes, remove registry entries...)

Computer users who are dealing with a rogue security software shouldn't buy it's full version. By paying for a license key of a fake antivirus program users would send their money and banking information to cyber criminals. Users who have already entered their credit card number (or other sensitive information) when asked by such bogus software should inform their credit card company that they have been tricked into buying a rogue security software. Screenshot of a web page used to lure computer users into paying for a non-existent full version of think point and other rogue antivirus programs:

To protect your computer from think point and other rogue antivirus programs users should:

If you have additional information on think point or it's removal please share your knowledge in the comments section below.

Scan this QR code to have an easy access removal guide of Think Point on your mobile device.
We Recommend: