What is Antivirus Security Pro?

Antivirus Security Pro is a fake antivirus program originating from a family of rogues called WinWebSec. This program is created by cyber criminals whose purpose is to trick unsuspecting PC users into purchasing a so-called 'full version'.

To achieve this deceptive goal, Antivirus Security Pro imitates a legitimate antivirus program by mimicking the scanning of a computer for security infections.

Note that this program has no virus definition database or a virus scan engine - it merely generates fake security threat detections and fake security warning pop-ups in order to scare computer users into believing that their operating systems are infected with high-risk malware and viruses.

After successful infiltration, this bogus software overrides the operating system's registry and configures itself to start automatically on each system start-up. Furthermore, it blocks execution of installed programs and the Task Manager. In fact, none of security threats reported by this fake antivirus program actually exist on the computer - it is a scam. 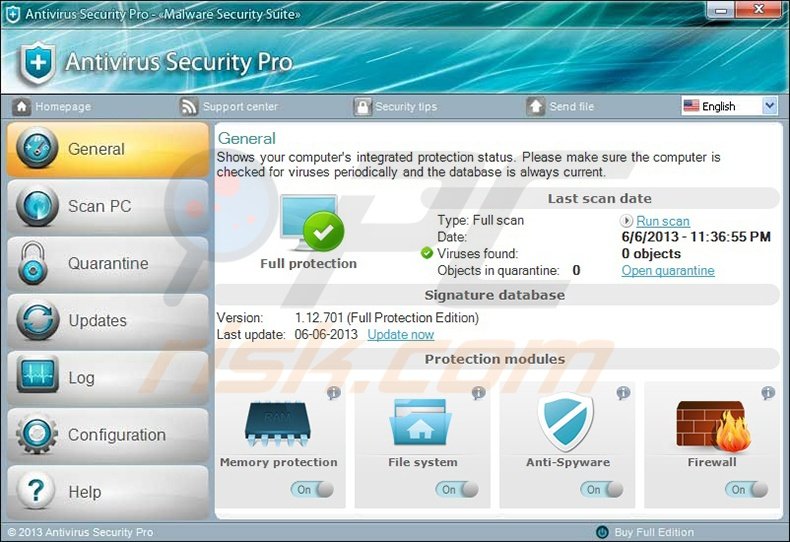 To protect your computer from such rogue programs, keep all installed software up-to-date and use legitimate antivirus and anti-spyware programs.

Previous fake antivirus programs originating from this family of rogues (WinWebSec) are named Attentive Antivirus and System Care Antivirus. If your computer is already infected with Antivirus Security Pro, use this removal guide to eliminate this scam from your PC. 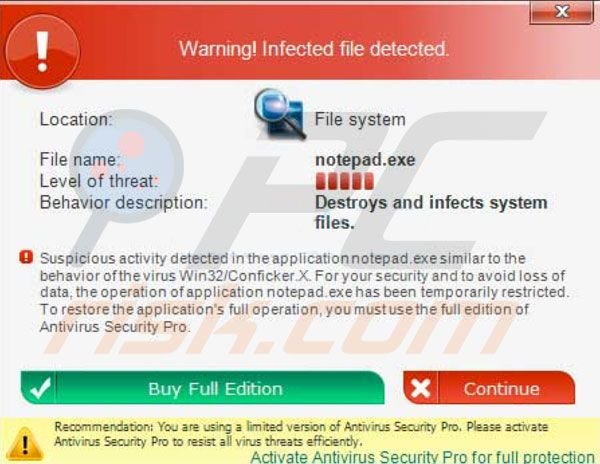 "Unless Antivirus Security Pro is activated, some of the current critical threats will not be eliminated and your computer will remain unprotected. Are you sure you would like to precede unprotected?"

"Warning! the site you are attempting to view may harm your computer! You current security settings put your computer at risk! Activate Antivirus Security Pro and enable safe web surfing (recommended). Ignore warnings and visit that site is the current state (not recommended)".

If your Internet browsers are blocked by the "Warning! The site you are trying to visit may harm your computer! Your security setting level puts your computer at risk!" message, click "Ignore warnings and visit that site in the current state (not recommended)" and continue with the download process.

If you cannot run the remover, try downloading an alternate installer (It is renamed to iexplore.exe, since most fake antivirus programs do not block execution of files with this name).

If you are still unable to download the recommended malware removal software - before downloading, enter a retrieved activation key in the activation window of Antivirus Security Pro. Click the "Buy full edition" button at the bottom of the main window of this fake antivirus software and enter one of these keys:

2. Antivirus Security Pro modifies the system Hosts file. The Hosts file is used to resolve canonical names of websites to IP addresses. When it is changed, the user may be redirected to malicious sites, despite seeing legitimate URLs in address bar. It is difficult to determine sites are genuine when the Hosts file is modified.

1. Wait until Antivirus Security Pro rogue antivirus completes the fake security scan and click the "Remove Threats" button. You can also click on the "Buy full edition" button on the bottom right corner of the main window of this rogue program. In the opened window, click on the "I, already have activation key" button. 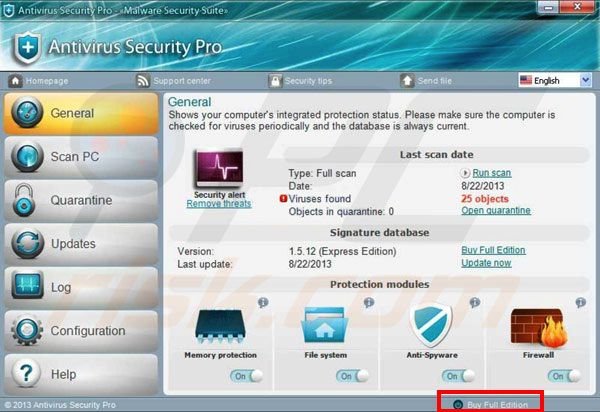 This step makes the removal process of this rogue antivirus program less complicated, since after entering this registry key, Antivirus Security Pro allows execution of installed software (including Internet browsers) and you are able to download anti-spyware software without various interruptions.

3. After entering this license key, Antivirus Security Pro generates some messages congratulating you for registration and imitates the removal process of earlier 'detected' malware and virus infections. 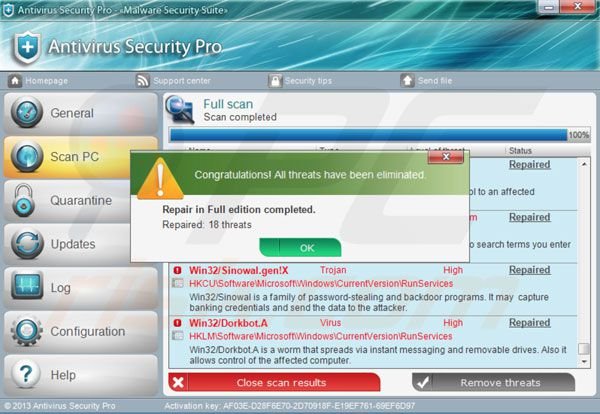 4. Note that entering this retrieved activation key does not remove Antivirus Security Pro from your computer - it simply makes the removal process less complicated. To completely remove this rogue antivirus from your computer, download and install recommended malware removal software.

Computer users who are dealing with a rogue security software shouldn't buy it's full version. By paying for a license key of a fake antivirus program users would send their money and banking information to cyber criminals. Users who have already entered their credit card number (or other sensitive information) when asked by such bogus software should inform their credit card company that they have been tricked into buying a rogue security software. Screenshot of a web page used to lure computer users into paying for a non-existent full version of antivirus security pro rogue and other rogue antivirus programs:

To protect your computer from antivirus security pro rogue and other rogue antivirus programs users should:

If you have additional information on antivirus security pro rogue or it's removal please share your knowledge in the comments section below.

Scan this QR code to have an easy access removal guide of Antivirus Security Pro Rogue on your mobile device.
We Recommend: