Cyber criminals also distribute this software using fake downloads. Following infiltration, Antivirus 10 imitates a system scan process and displays a number of fake threats. Users are then encouraged to purchase a full version of Antivirus 10 to remove them. Be aware, however, that this is a scam. 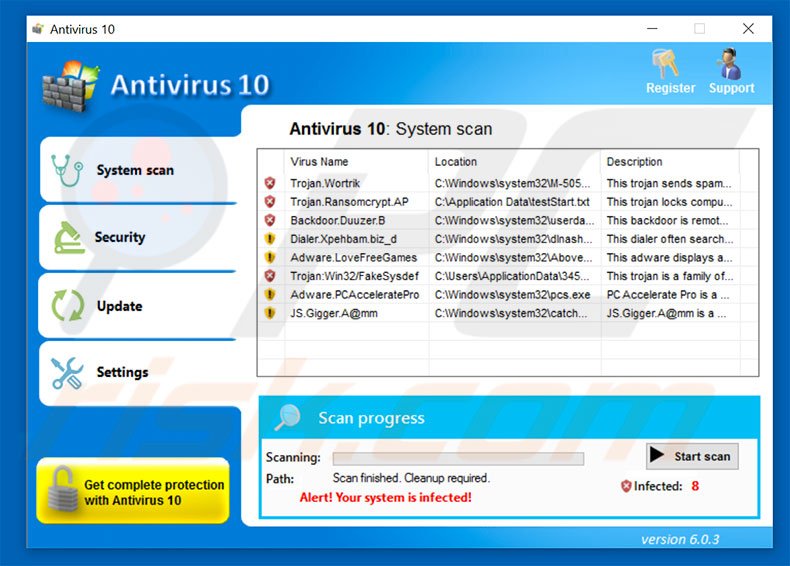 Antivirus 10 displays fake system warnings (Windows Firewall alerts, outdated software notifications, etc.) and a list of 'viruses' that do not exist. It also opens various malicious websites (for example, pornographic sites) to imitate the behavior of viruses that allegedly exist.

These actions are performed to scare users and trick them into paying for a full version of this fake anti-virus software. In fact, Antivirus 10 provides no significant value for regular users. All displayed warnings and viruses are false. The only purpose of this app is to generate revenue for the developers.

There are dozens of similar fake anti-virus suites. For instance, malware such as AntiVirus Pro 2017, AVLab Internet Security, A-Secure 2015, and many others, also imitate computer scans and state that the computer is infected with high-risk malware. As with Antivirus 10, however, these apps are also designed only to generate revenue for the developers.

In addition, never use third party download/installation set-ups, since there is a high probability that these tools will install additional applications as 'bundles'. 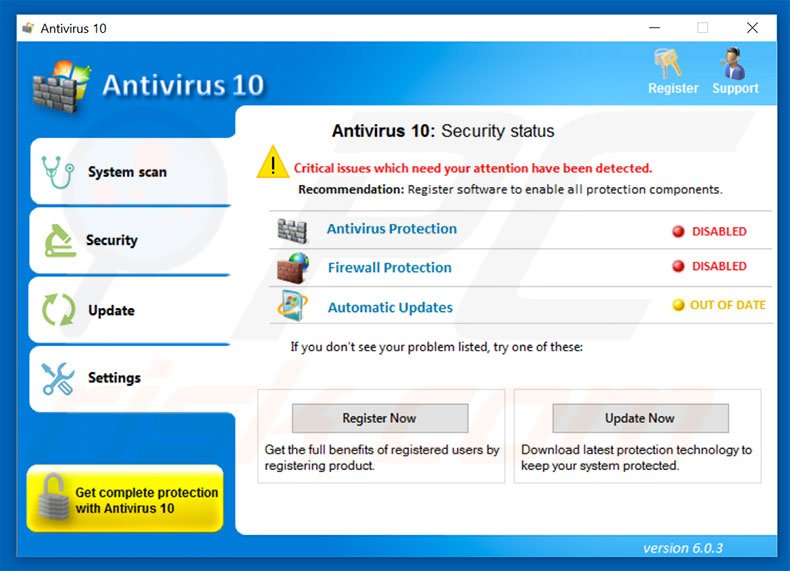 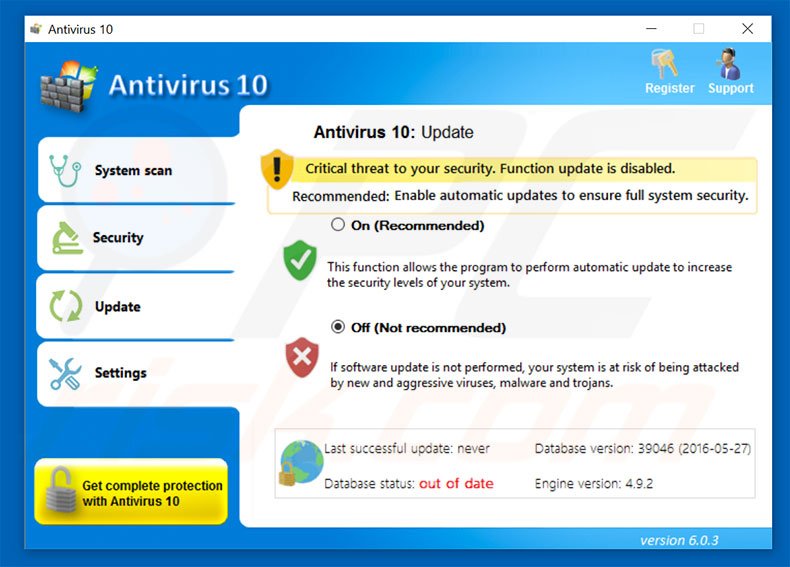 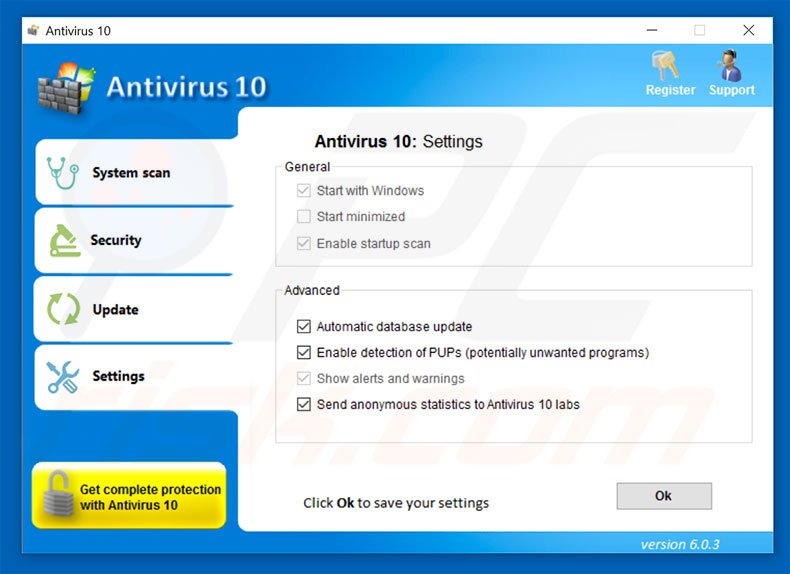 Screenshot of Antivirus 10 full version purchase website (this site was down at time of testing): 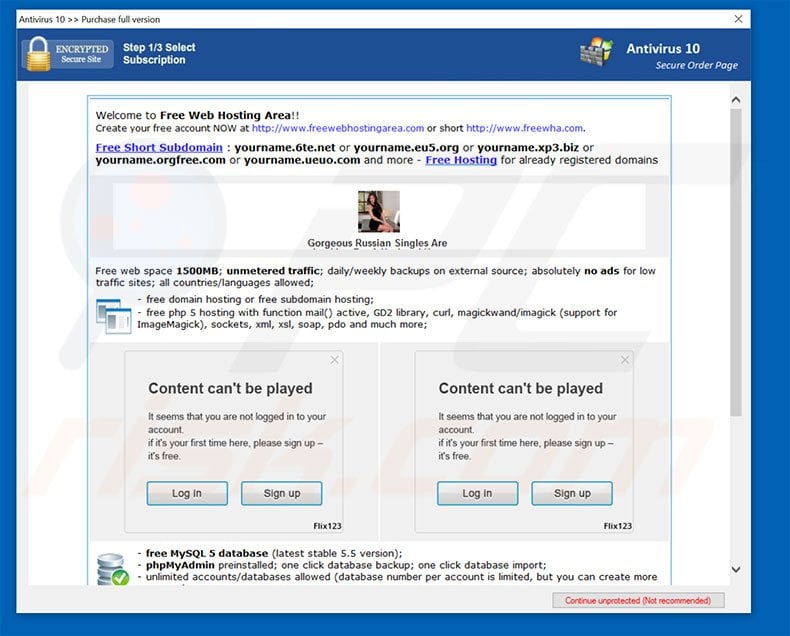 Attention! The security of your computer has been compromised! Microsoft Windows files are now corrupted. Malicious software, which can lead to irreversible damages to your hard drive have been found on your system! The destruction of important files in C:\WINDOWS could lead to data loss, system errors and hard drive failure! Click YES to remove malicious software and protect your PC. (Recommended) 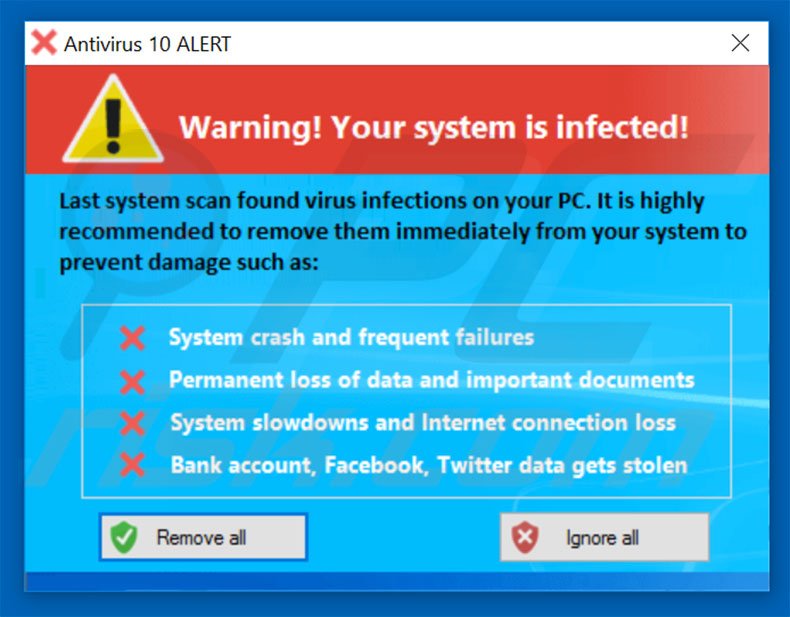 Your system is infected! Last system scan found virus infections on your PC. It is highly recommended to remove them immediately from your system to prevent damage such as: System crash and frequent failures, Permanent loss of data and important documents, System slowdowns and Internet connection loss, Bank account, Facebook, Twitter data gets stolen. 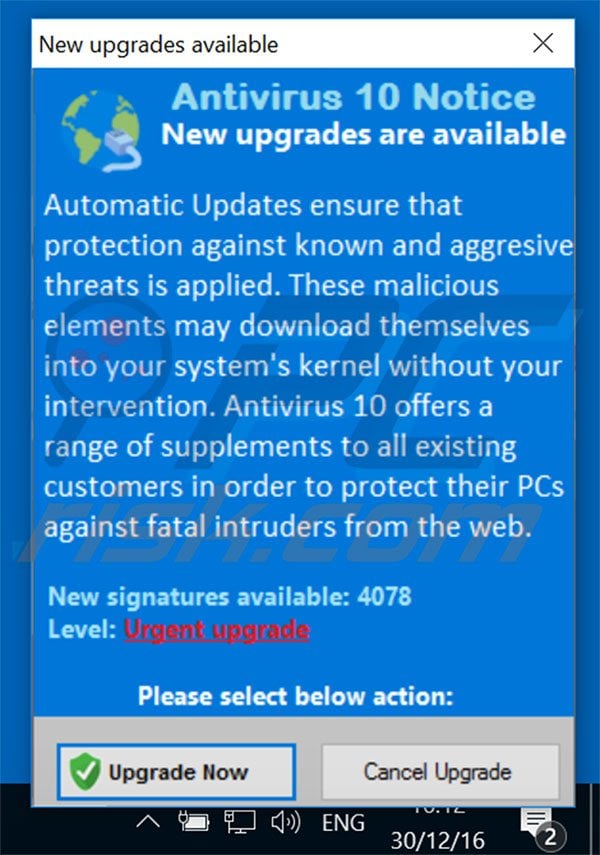 Text presented within this pop-up:

Antivirus 10 Notice New upgrades are available. Automatic Updates ensures that protection agains know and aggressive threats is applied. These malicious elements may download themselves into your system’s kernel without your intervention. Antivirus 10 offers a range of supplements to all existing customers in order to protect their PCs agains fatal intruders from the web. New signatures available: 4078 Level: Urgent upgrade. 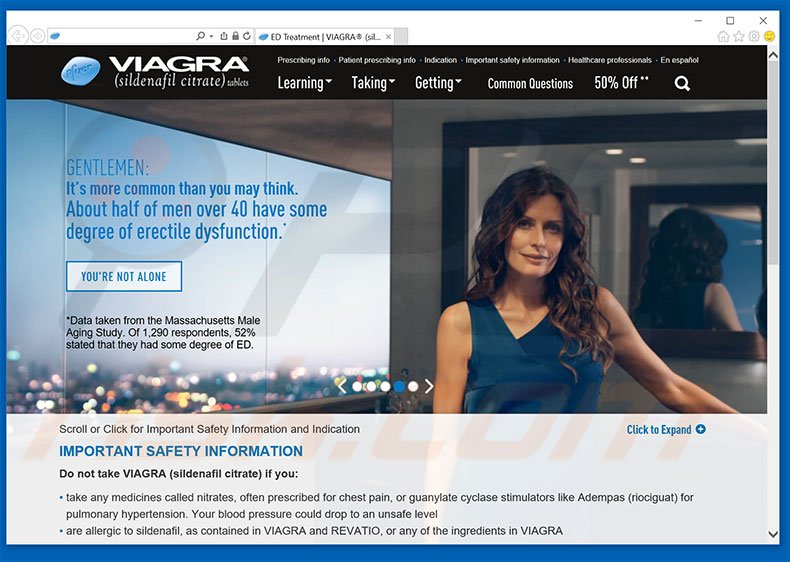 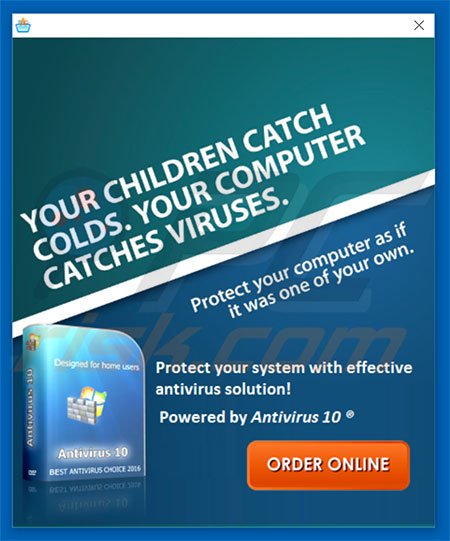 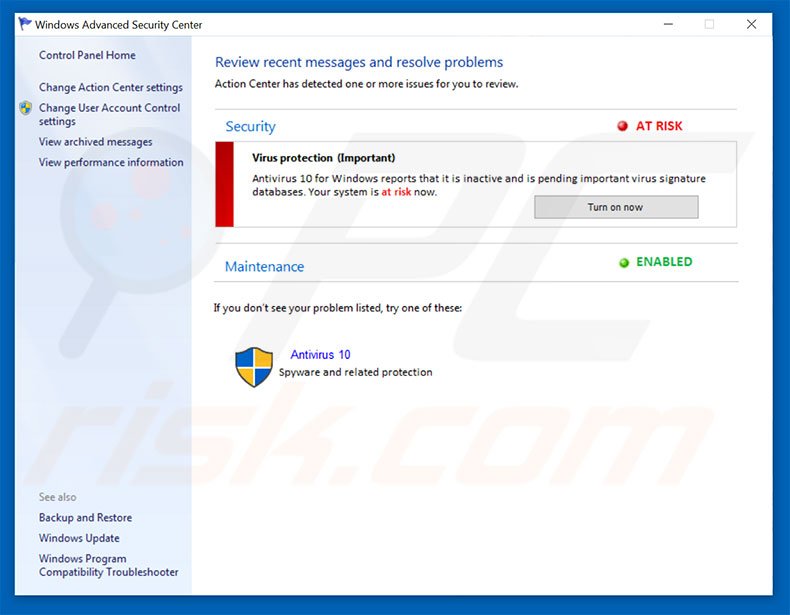 After booting your computer in Safe Mode with Networking, try downloading and running the recommended antimalware software.

If, after or before, removal of this fake antivirus program you are unable to run any of your installed software, Antivirus 10 has modified your operating system's .exe file associations. To fix this, download the registry fix (link below). Save it to your computer, double click it, click "Yes", and then "OK". After rebooting your PC, file associations should function normally.

Antivirus 10 rogue blocks execution of all installed software - this makes its removal complicated. The best way to eliminate this rogue is to login to an unaffected user account and run a security scan from it. If available, login to "Guest" account and follow the removal steps provided below. If your "Guest" user account is not activated, follow these steps:

Step 2
Antivirus 10 modifies the system Hosts file. The Hosts file is used to resolve canonical names of websites to IP addresses. When it is changed, the user may be redirected to malicious sites, despite observing legitimate URLs in address bar. It is difficult to determine which sites are genuine when the Hosts file is modified.

Other tools known to remove Antivirus 10:

Computer users who are dealing with a rogue security software shouldn't buy it's full version. By paying for a license key of a fake antivirus program users would send their money and banking information to cyber criminals. Users who have already entered their credit card number (or other sensitive information) when asked by such bogus software should inform their credit card company that they have been tricked into buying a rogue security software. Screenshot of a web page used to lure computer users into paying for a non-existent full version of antivirus 10 scam and other rogue antivirus programs:

To protect your computer from antivirus 10 scam and other rogue antivirus programs users should:

If you have additional information on antivirus 10 scam or it's removal please share your knowledge in the comments section below.

What is the Antivirus 10 application?

Antivirus 10 is a fake anti-virus, a type of PUA (Potentially Unwanted Application). It "detects" various system infections and urges users to purchase the activation key to enable its full functionalities - and thus remove the threats. However, both the detections and the threat-removal features are fake. Hence, by purchasing this fake anti-virus - users will be scammed out of their money.

What is the purpose of a fake anti-virus/ unwanted application?

Antivirus 10 aims to generate revenue by deceiving users into purchasing it. Note that unwanted applications (e.g., fake anti-viruses, adware, browser hijackers, etc.) can have additional harmful functions, such as displaying deceptive/malicious ads, causing redirects to hazardous sites, collecting private data, and so on.

In most cases, unwanted applications are deemed legal as their End User License Agreements (EULA) tend to inform users about their potential behavior.

Is having Antivirus 10 unwanted application installed on my computer dangerous?

If users purchase the Antivirus 10 app - they will experience financial loss, as this program is incapable of detecting/removing threats. Additionally, unwanted applications may have harmful abilities, and this may be true of Antivirus 10.

It must be mentioned that manual removal (performed without the aid of security software) might not be ideal. In some instances, even after the undesirable software has been (manually) removed - various remnants (files) get left behind. These components may continue to run and cause problems. Therefore, it is paramount to be thorough when removing software.

Scan this QR code to have an easy access removal guide of Antivirus 10 scam on your mobile device.
We Recommend: