AntiVirus Pro 2017 is fake anti-virus software created by cyber criminals with the intention of tricking users into buying the 'full' version. This dubious application stealthily installs on system via Trojans, fake downloads, and malicious websites. After infiltration, AntiVirus Pro 2017 reports that the system is infected with various high-risk computer viruses.

Next, warning messages are displayed, stating that the computer is at risk and the user is strongly advised to upgrade this false anti-virus software to a full version capable of eliminating these threats. This software is, however, a scam - it imitates the detection of computer infections that do not exist, and therefore, buying the so-called 'full' version is equivalent to sending your money to cyber criminals. 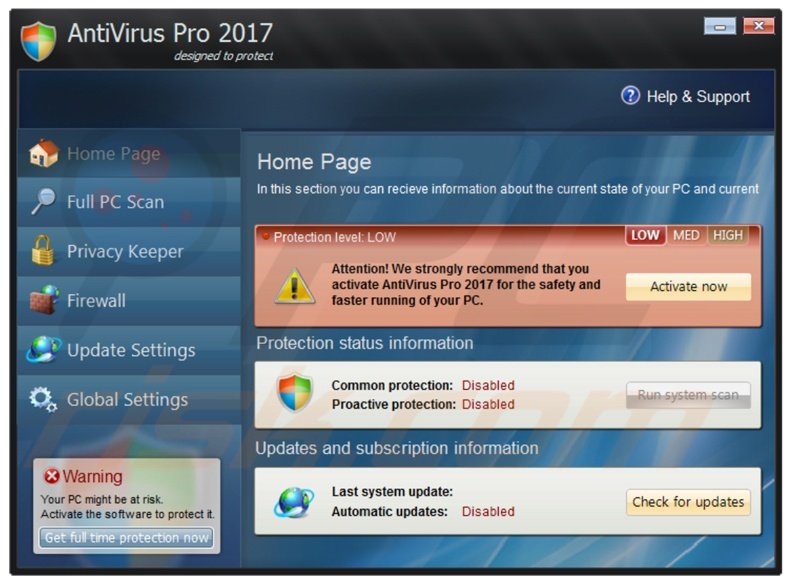 The developers of this bogus application aim to scare users into believing that their computer systems are in danger due to various security issues. Their goal is to trick unsuspecting users into the purchase of a license key required for activation of AntiVirus Pro 2017.

If you notice that this program is performing a system scan, your computer has been infected with false anti-virus suite. Do not pay for the full version of AntiVirus Pro 2017 and eliminate this bogus application from your system immediately.

As mentioned above, this bogus application is simply an imitation of a legitimate anti-virus program, and therefore, it should not be trusted. AntiVirus Pro 2017 displays false security warning messages and lists of 'detected' malware to deceive users into believing their systems are infected with a wide range of high-risk computer infections.

This situation can be avoided by keeping all software and operating systems up-to-date and by using genuine anti-spyware and anti-virus programs.

Following infiltration on the system, AntiVirus Pro 2017 disables the operating system Task Manager, denying use of Internet browsers and making removal of this scam more complicated. If your computer has been infected with this bogus application, the instructions provided below will guide you through removal. 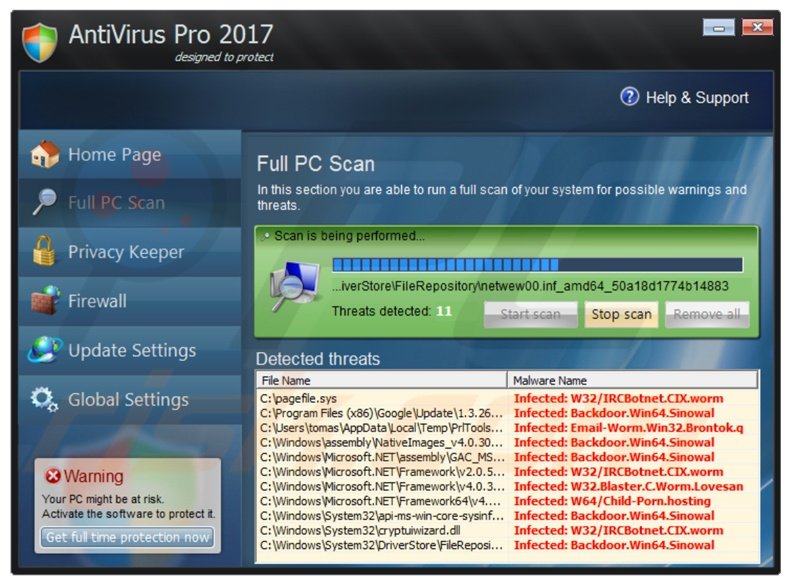 “Security Warning - Malicious program has been detected. Click here to protect your computer”

“Firewall Warning, Hidden file transfer to remote host has been detected - AntiVirus Pro 2017 has detected a leak of your files through the Internet. We strongly recommend that you block the attack immediately”

“AntiVirus Pro 2017 has found 57 useless and UNWANTED files on your computer! - Potentially dangerous files were found on your system during the last scan! It is strongly recommended that you remove them immediately”

AntiVirus Pro 2017 requesting users pay (€59.99 for one year and €88.99 for a three-year subscription) for a 'full' version to eliminate fake computer threats:

To make the removal process of Antivirus Pro 2017 less complicated, try entering the retrieved registry key. Click the "get full time protection now" button located at the bottom left corner of the main window, enter a fake email address and this registry key: 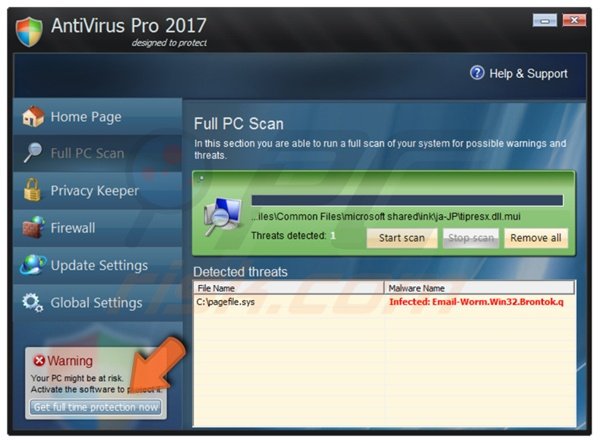 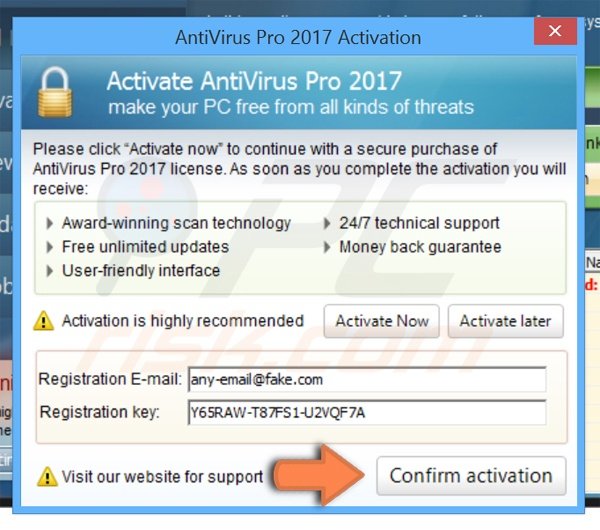 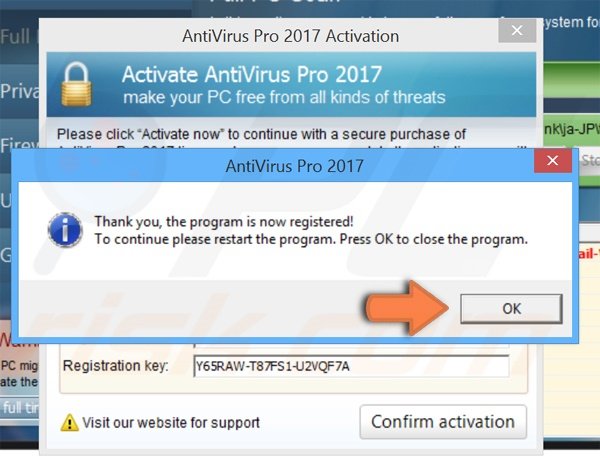 Note that by entering this registry key, you will trick Antivirus Pro 2017 into behaving as if you have purchased the full version. This will unblock your Task Manager and you will be able to use your Internet browsers to download legitimate anti-spyware software and eliminate this scam from your computer.

If, after or before, removal of this fake antivirus program you are unable to run any of your installed software, AntiVirus Pro 2017 has modified your operating system's .exe file associations. To fix this, download the registry fix (link below). Save it to your computer, double click it, click "Yes", and then "OK". After rebooting your PC, file associations should function normally.

AntiVirus Pro 2017 rogue blocks execution of all installed software - this makes its removal complicated. The best way to eliminate this rogue is to login to an unaffected user account and run a security scan from it. If available, login to "Guest" account and follow the removal steps provided below. If your "Guest" user account is not activated, follow these steps:

Step 2
AntiVirus Pro 2017 modifies the system Hosts file. The Hosts file is used to resolve canonical names of websites to IP addresses. When it is changed, the user may be redirected to malicious sites, despite observing legitimate URLs in address bar. It is difficult to determine which sites are genuine when the Hosts file is modified.

Computer users who are dealing with a rogue security software shouldn't buy it's full version. By paying for a license key of a fake antivirus program users would send their money and banking information to cyber criminals. Users who have already entered their credit card number (or other sensitive information) when asked by such bogus software should inform their credit card company that they have been tricked into buying a rogue security software. Screenshot of a web page used to lure computer users into paying for a non-existent full version of antivirus pro 2017 scam and other rogue antivirus programs:

If you have additional information on antivirus pro 2017 scam or it's removal please share your knowledge in the comments section below.

Scan this QR code to have an easy access removal guide of AntiVirus Pro 2017 scam on your mobile device.
We Recommend: