What is Expert Console?

Furthermore, it disables the Task Manager and blocks execution of installed programs. In some cases, it blocks the entire desktop. Registry modifications are applied in order to make the removal process more complicated and create a sense of high-risk malware and virus infections.

This bogus program is developed by cyber criminals in the hope that unsuspecting PC users will trust the software and purchase the license key in order to eliminate the supposedly 'detected' security threats. PC users should be aware that no security infections identified by Windows Expert Console actually exist on their systems - it is merely a scam. 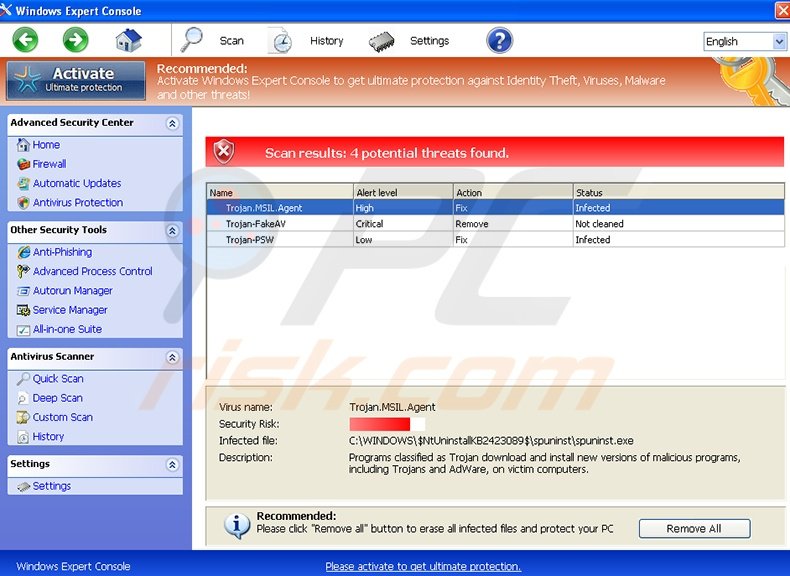 This fake antivirus program originates from a family of rogue security scanners called FakeVimes. Cyber criminals responsible for creating this scam attempted to develop the rogue software to appear as if it was created by Microsoft. Microsoft, however, develops only one antivirus program called Microsoft Security Essentials - legitimate antivirus software, which is free of charge.

If you observe Windows Expert Console scanning your computer for security infections, your PC is infiltrated with fake antivirus software - ignore the fake security warning messages and do not buy the license key.

When dealing with this rogue program, be aware that any 'identified' security infections and security scans are displayed only to scare PC users into purchasing the useless license key. The correct way to deal with this bogus software is to eliminate it from your computer.

"Error Key-logger activity detected" System information security is at risk. It is recommended to activate protection of Windows Expert Console and run a full system.

1. Wait until this rogue antivirus program completes the fake security scan and click "Settings" (at the top of the main window).

4. Windows 7 users: Click on a Windows logo, in the "Search programs and files" field, type "Command Prompt". In the opened list, click the right mouse button over the "Command Prompt" entry and select "Run as administrator". 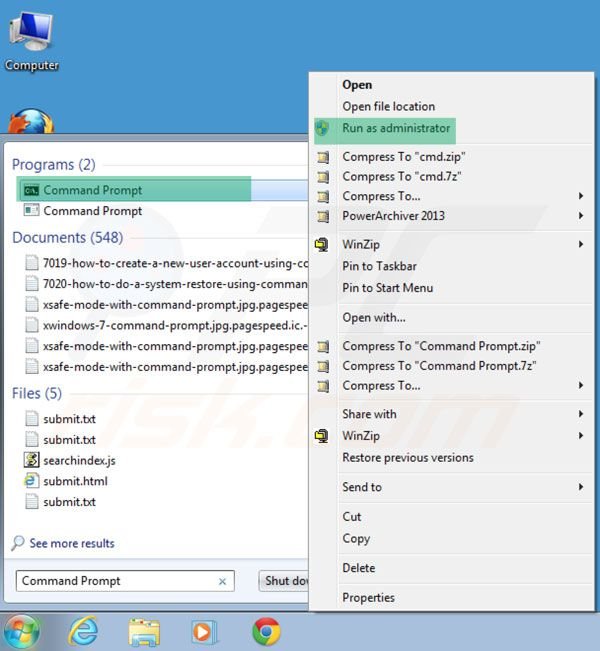 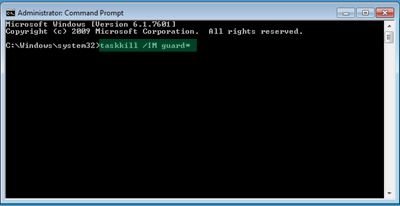 If you are unable to download or run the spyware remover, try running the registry fix (link below). It enables execution of programs. Download the registryfix.reg file, double click it, click YES and then OK.

After removing this rogue software, you should reset the Hosts file. Do not skip this step since Windows Expert Console modifies your Hosts files, and you will encounter browser redirect problems if malicious entries are not eliminated.

After completing all these steps your computer should be clean.

Computer users who are dealing with a rogue security software shouldn't buy it's full version. By paying for a license key of a fake antivirus program users would send their money and banking information to cyber criminals. Users who have already entered their credit card number (or other sensitive information) when asked by such bogus software should inform their credit card company that they have been tricked into buying a rogue security software. Screenshot of a web page used to lure computer users into paying for a non-existent full version of expert console antivirus and other rogue antivirus programs:

To protect your computer from expert console antivirus and other rogue antivirus programs users should:

If you have additional information on expert console antivirus or it's removal please share your knowledge in the comments section below.

Scan this QR code to have an easy access removal guide of Expert Console Antivirus on your mobile device.
We Recommend: