What is Activity Booster?

Windows Activity Booster is a fake antivirus program that reports nonexistent security infections to scare PC users into activating it's "ultimate protection" (purchasing its full version) to remove the supposedly detected security infections. PC users should know that in reality none of the security threats that are being indicated by this bogus software actually exist on one's computer - Cyber criminals who created this rogue software are hoping that PC users will fall for this trickery and will purchase this program. Notice that buying Windows Activity Booster would equal to sending one's money to Cyber criminals; moreover, users would also give away their credit card information and this could end in further money thefts. 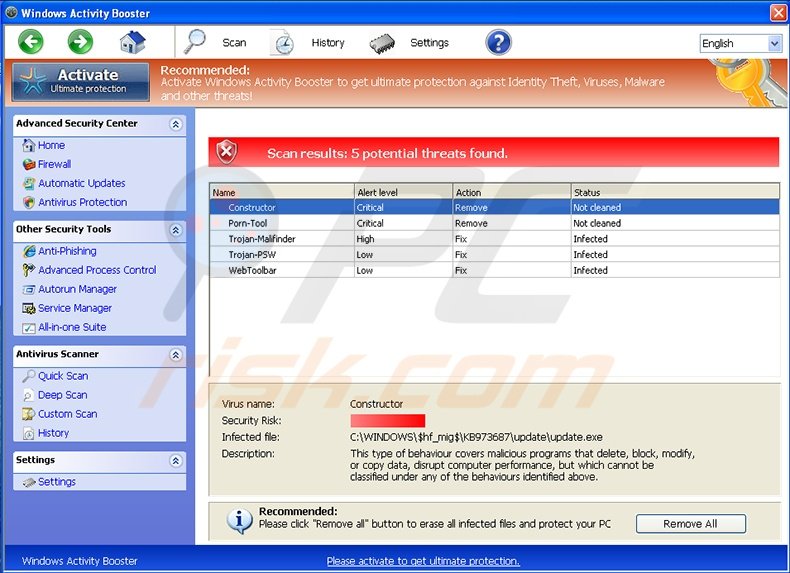 Most commonly this rogue antivirus program infiltrates user's operating system using fake online security scanners. Internet users should know that online pop-up messages informing about various security infections, and proposing to download some security software are a not legitimate; such messages are being actively used by Cyber criminals to distribute rogue antivirus programs. If you see this program scanning your computer for security infections you can be sure that your PC was infected with a rogue antivirus program, don't trust any information generated by Windows Activity Booster, the right way of treating this scam is it's elimination from one's computer.

This rogue program originates from a family of rogue security scanners called FakeVimes, previously discovered variants were named Windows Warding Module, Windows Active Hotspot and Windows Cleaning Toolkit. Compared to the older versions Windows Activity Booster is more advanced - this rogue program completely blocks user's access to one's desktop. Such behavior is similar to ransomware infections which locks user's computer and demand paying some non existent fine for supposedly made law violations. To protect one's computer from such bogus antivirus programs, users should always keep their installed programs up-to-date and use legitimate antivirus and anti-spyware programs. If you have noticed Windows Activity Booster on your desktop, you should use the provided removal instructions and eliminate this scam from your PC.

Before downloading the removal software for this rogue antivirus program complete these steps:

1. Wait until this rogue antivirus program finishes it's fake security scan and click "Settings" (at the top of the main window).

4. Windows 7 users: Click on a Windows logo, in the "Search programs and files" field type "Command Prompt". In the opened list click the right mouse button over "Command Prompt" entry and select "Run as administrator". 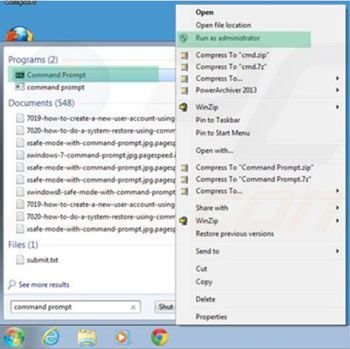 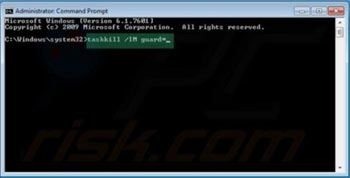 6. After killing the process of Windows Activity Booster download legitimate anti-spyware software to completely remove this rogue antivirus program from your computer.

Windows XP and Windows 7 users: During your computer starting process press F8 key on your keyboard multiple times until Windows Advanced Options menu shows up, then select Safe mode with networking from the list and press ENTER.

After removing this rogue software, you should reset one's Hosts file. Don't skip this step, Windows Warding Module modifies your Hosts files, and you will encounter browser redirect problems if malicious entries will not be eliminated.

Hosts file is used to resolve some canonical names of websites to IP addresses. When it's modified users may be redirected to malicious websites while still seeing a good URL in the address bar. To fix this, please download Microsoft Fix It tool, it restores one's hosts file to Windows default. Run this tool when downloaded and follow the on-screen instructions. Download link below:

After completing all these steps your computer should be clean.

Computer users who are dealing with a rogue security software shouldn't buy it's full version. By paying for a license key of a fake antivirus program users would send their money and banking information to cyber criminals. Users who have already entered their credit card number (or other sensitive information) when asked by such bogus software should inform their credit card company that they have been tricked into buying a rogue security software. Screenshot of a web page used to lure computer users into paying for a non-existent full version of activity booster antivirus and other rogue antivirus programs:

To protect your computer from activity booster antivirus and other rogue antivirus programs users should:

If you are experiencing problems while trying to remove activity booster antivirus from your computer, please ask for assistance in our malware removal forum.

If you have additional information on activity booster antivirus or it's removal please share your knowledge in the comments section below.

hi Mia, you could try clicking on the question mark button (at the top of Windows Ultimate Booster), then click "Register". In the opened window enter this registry key: 0W000-000B0-00T00-E0001 After entering this key Windows Ultimate Booster will allow launching Internet browsers. Download legitimate anti-malware software to completely eliminate this fake antivirus from your computer.

I have attempted to remove windows ultimate booster, but after I click on settings and select allow unprotected startup, I can't reach the X at the top of the page because the notebook screen is too high. Please tell me how to solve this problem. Thank you, Mia

A QR code (Quick Response Code) is a machine-readable code which stores URLs and other information. This code can be read using a camera on a smartphone or a tablet. Scan this QR code to have an easy access removal guide of Activity Booster Antivirus on your mobile device.
We Recommend: