Sirius Win 8 Antivirus 2014 is a fake antivirus program originating from a family of rogue security scanners called Braviax/FakeRean. This program was developed by cyber criminals and employs a deceptive strategy intended to coerce computer users into purchasing a useless license key. This program holds no virus scan engine or malware definition database, however, it performs 'security scans' and displays lists of identified security infections supposedly detected on users' PCs. This is a scam designed to scare PC users into believing that their computers are infected with high-risk malware and viruses. Sirius Win 8 Antivirus 2014 is merely an imitation of a legitimate antivirus program, and therefore, should not be trusted or purchased. 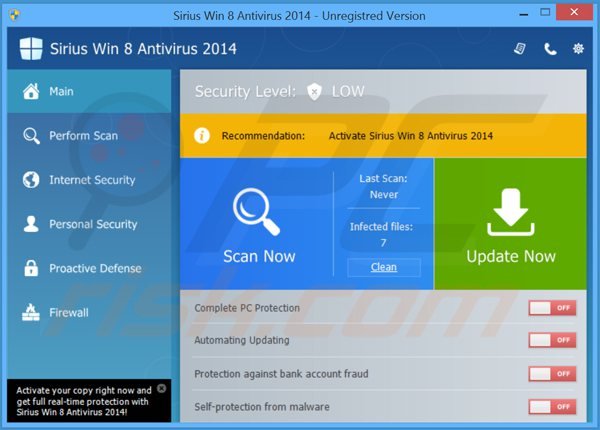 This malicious program is capable of adapting its name according to the operating system infiltrated. For example, on computers running the Windows 7 operating system, the rogue program appears as Sirius Win 7 Antivirus 2014; on PCs with Windows XP, it appears as Sirius XP Antivirus 2014. To achieve its deceptive goal of misleading PC users, this bogus software not only displays fake security scans and mimics the detection of multiple security infections, but also modifies the registry entries of infiltrated operating systems. Furthermore, Sirius Win 8 Antivirus 2014 disables execution of installed software and hijacks Internet browsers.

Sirius Win 8 Antivirus 2014 is a scam. None of the information displayed (security scans, warning pop-ups, etc) are legitimate. Commonly, cyber criminals employ Trojans and fake online security warning messages to infiltrate systems. To prevent infections by these rogue security scanners, use legitimate antivirus and antispyware programs. To make the work of cyber criminals more difficult, keep your operating system and installed software (Flash, Java, etc.) up-to-date. If you observe Sirius Win 8 Antivirus 2014 scanning your computer for security infections, your PC is infiltrated with fake antivirus software - do not trust it and use this removal guide to eliminate it from your computer.

“Sirius Win 8 Antivirus 2014 has blocked a program from accessing the internet - This program is infected with Trojan-BNK.Win32.Keylogger.gen Private data can be stolen by third parties, including credit card details and passwords” 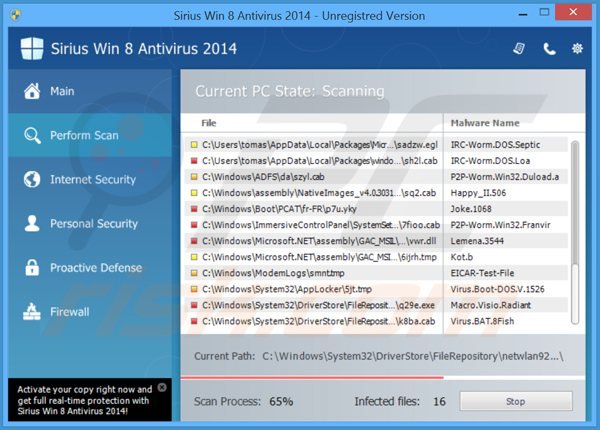 Get a copy of “Sirius Win 8 Antivirus 2014” to safeguard your PC while surfing the web (RECOMMENDED)
Run a spyware, virus and malware scan
Continue surfing without any security measures (DANGEROUS) 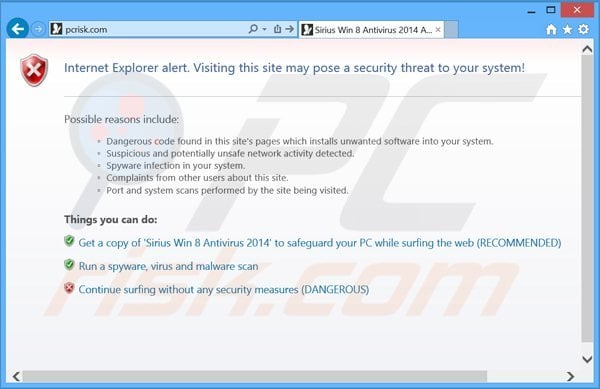 Sirius Win 8 Antivirus 2014 has blocked a program from accessing the Internet. This program is infected with Trojan-BNK.Win32.Keylogger.gen Private data can be stolen by third parties, including credit card detail and passwords. 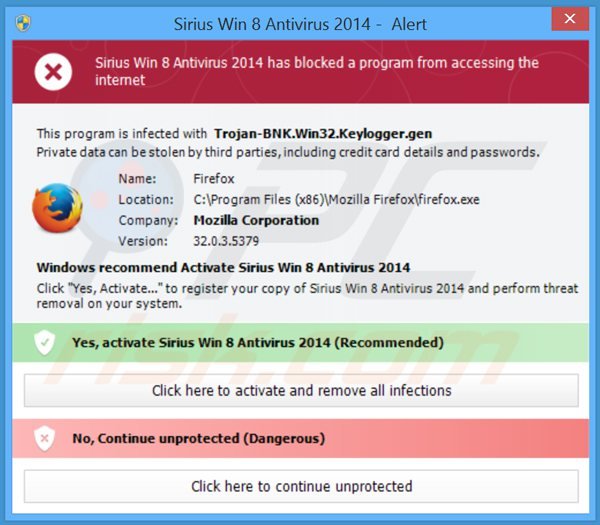 Action Center has detected one or more issues for you to review. Windows Defender and Sirius Win 8 Antivirus 2014 are both turned off. 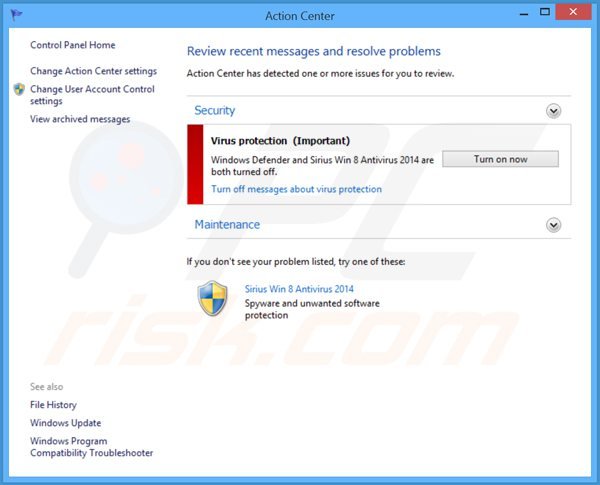 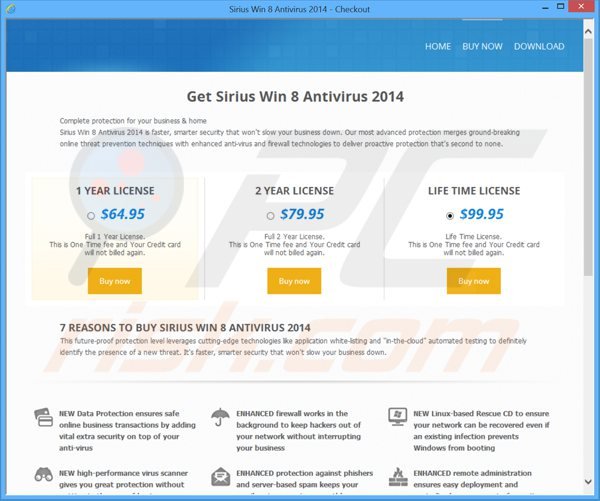 If, after or before, removal of this fake antivirus you are unable to run any of your installed software, Sirius Win 8 Antivirus 2014 has modified your operating system's .exe file associations. To fix this, download the registry fix (link below). Save it to your computer, double click it, click "Yes", and then "OK". After rebooting your PC, file associations should function normally.

Sirius Win 8 Antivirus 2014 hijacks Internet browsers, modifies registry settings, and disables execution of programs. For these cases, our developers have created a custom installer - useful when you are unable to browse the Internet or execute .exe files. It starts like an MS-Dos program, runs some registry fixes, and then initiates execution of an installer. This installer was tested on the Windows 7, Windows Vista, and XP operating systems infected with the most common spyware infections.

To use this installer, right-click in the lower left corner of the screen. In the Quick Access Menu, select Run. 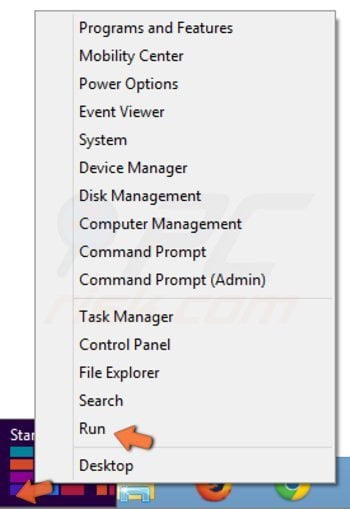 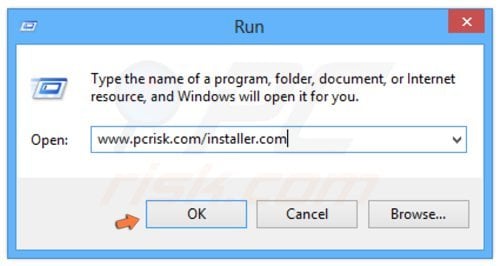 Sirius Win 8 Antivirus 2014 will generate a fake warning after pressing ENTER. Please ignore this and click "No, stay unprotected..." on this message.

Sirius Win 8 Antivirus 2014 rogue blocks execution of all installed software - this makes its removal complicated. The best way to eliminate this rogue is to login to an unaffected user account and run a security scan from it. If available, login to a "Guest" account and follow the removal steps provided below. If your "Guest" user account is not activated, follow these steps:

Restart your PC, when the Windows logon screen appears, select the "Guest" user, then continue with the removal steps provided below.

Step 2
Some variants of this spyware modify system proxy settings so that you are unable to access the Internet (or website addresses are redirected to malicious or phishing websites). To reset the proxy settings to default, download and run this tool:

Step 3
Sirius Win 8 Antivirus 2014 modifies the system Hosts file. The Hosts file is used to resolve canonical names of websites to IP addresses. When it is changed, the user may be redirected to malicious sites, despite seeing legitimate URLs in address bar. It is difficult to determine if sites are genuine when the Hosts file is modified. To fix this, download the Microsoft Fix It tool, which restores your Hosts file to the Windows default. Run this tool when downloaded and follow the on-screen instructions. Download link below:

Step 4
That's It! You can now try to download the Malware remover or install and run it if already downloaded. In most cases, this leads to success, but if not, please describe your problem in our FORUM and our technicians will try to help.

Computer users who are dealing with a rogue security software shouldn't buy it's full version. By paying for a license key of a fake antivirus program users would send their money and banking information to cyber criminals. Users who have already entered their credit card number (or other sensitive information) when asked by such bogus software should inform their credit card company that they have been tricked into buying a rogue security software. Screenshot of a web page used to lure computer users into paying for a non-existent full version of sirius win 8 antivirus 2014 scam and other rogue antivirus programs:

To protect your computer from sirius win 8 antivirus 2014 scam and other rogue antivirus programs users should:

If you are experiencing problems while trying to remove sirius win 8 antivirus 2014 scam from your computer, please ask for assistance in our malware removal forum.

If you have additional information on sirius win 8 antivirus 2014 scam or it's removal please share your knowledge in the comments section below.

A QR code (Quick Response Code) is a machine-readable code which stores URLs and other information. This code can be read using a camera on a smartphone or a tablet. Scan this QR code to have an easy access removal guide of Sirius Win 8 Antivirus 2014 scam on your mobile device.
We Recommend: