Antivirus Plus 2014 is a rogue antivirus program that mimics the detection of high-risk malware infections in order to scare PC users into purchasing a useless license key. This bogus software is created by cyber criminals who distribute it via infected email messages, P2P networks, malicious websites, and 'exploit kits'.

Following successful infiltration, this fake antivirus software begins imitating a legitimate security program by initiating a computer security scan. After less than a minute, Antivirus Plus 2014 reports that the security scan is complete and that various viruses and malware are detected on the system.

To eliminate these supposedly 'detected' security threats, users are encouraged to 'Activate Full Time Protection' (i.e. purchase a license key for this program). Do not fall for this trickery - no security infections indicated by this program actually exist on your computer. 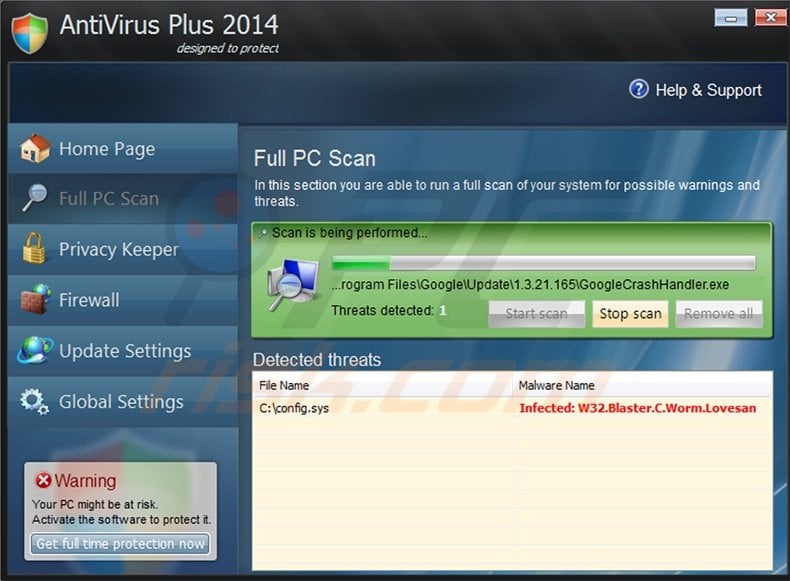 This program is a scam. It fakes the detection of identical security threats on all computers infiltrated by reporting 15 falsely-generated and unwanted files. This program originates from a family of fake antivirus programs called FakeRean. Previous variants were named Internet Security and System Protection.

Computer users should be aware that Antivirus Plus 2014 has no virus definition database or virus scan engine - it is merely a scam created by cyber criminals. Purchasing a license key for this program is equivalent to sending your money to cyber criminals, and furthermore, users will divulge their credit card information, potentially leading to other thefts.

Users who have already purchased this rogue program should contact their credit card company and dispute the charges, explaining that they have been tricked into buying a fake antivirus program.

The best way to protect your computer from rogue programs such as this is by using legitimate antivirus and anti-spyware software and keep their operating systems and installed programs up-to-date. If your computer is infected with Antivirus Plus 2014, use the removal guide provided to eliminate this scam.

The following are fake security warning pop-ups used by this rogue program. These are used to scare PC users into believing that their computers are infected with high-risk malware:

Security Warning! - Malicious program has been detected. Click here to protect your computer.

Antivirus Plus 2014 has found 12 useless and UNWANTED files on your computer! Potentially dangerous files were found on your system during the last scan! It is strongly recommended that you remove them immediately.

This fake antivirus program blocks execution of Internet browsers and other installed programs, and thus, complicated to eliminate. This removal guide describes how to disable this bogus program by renaming its executable file. After successful infiltration the rogue program creates a desktop icon named "Antivirus Plus 2014."

Click the right mouse button over this icon and select "Properties": 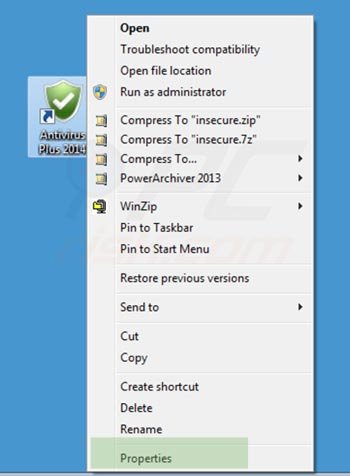 In the opened window, click the "Open file location" button:

In the opened window, click the right mouse button over the selected file and select "Rename": 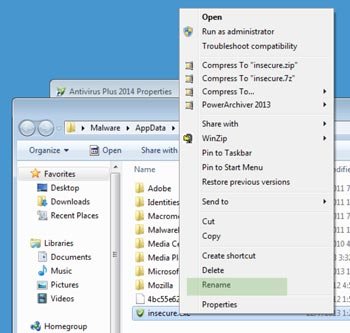 Change the name of the Antivirus Plus 2014 executable file to fake.exe (or any other). 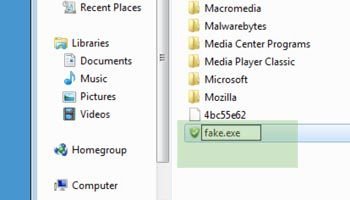 After restarting your computer, you will notice that Antivirus Plus 2014 is no longer active - you will now be able to access the Internet and perform other previously-blocked tasks. Now, download recommended malware removal software to completely remove this rogue antivirus program from your computer.

Step 1
Click the "Get full protection now" button located at the bottom left corner of the main window of this rogue antivirus program. In the registration window, enter a dummy email address, in the registration key field enter Y68REW-T76FD1-U3VCF5A, and then click "Confirm activation."

You can also try using these registry keys: 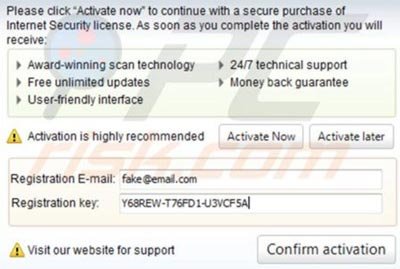 After entering the provided registry key, Antivirus Plus 2014 will thank you for successful registration and mimics the removal of previously-detected security infections.

Note that registering Antivirus Plus 2014 "designed to protect" will not remove it. It will simply enable execution of installed programs, thus allowing you to access the Internet. This step is optional, however, it can make the removal process less complicated. To completely remove Antivirus Plus 2014 from your PC, proceed to the next step.

Windows 8 users: Windows key + R, The Run window will pop up. In the opened "Run" window, type:  www.pcrisk.com/installer.com and then press ENTER. 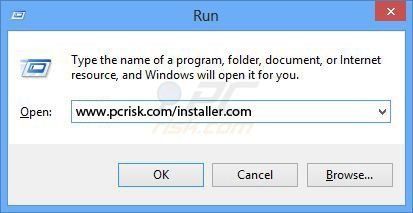 1. Windows XP and Windows 7 users: Start your computer in Safe Mode. Click Start, click Shut Down, click Restart, click OK. During your computer starting process press the F8 key on your keyboard multiple times until you see the Windows Advanced Option menu, then select Safe Mode with Networking from the list.

Other tools known to remove Antivirus Plus 2014 "designed to protect":

Computer users who are dealing with a rogue security software shouldn't buy it's full version. By paying for a license key of a fake antivirus program users would send their money and banking information to cyber criminals. Users who have already entered their credit card number (or other sensitive information) when asked by such bogus software should inform their credit card company that they have been tricked into buying a rogue security software. Screenshot of a web page used to lure computer users into paying for a non-existent full version of antivirus plus 2014 virus and other rogue antivirus programs:

To protect your computer from antivirus plus 2014 virus and other rogue antivirus programs users should:

If you have additional information on antivirus plus 2014 virus or it's removal please share your knowledge in the comments section below.

Scan this QR code to have an easy access removal guide of Antivirus Plus 2014 Virus on your mobile device.
We Recommend: